Here I am again back in Kanom because my wife’s good friend’s father (90+) has passed away. Received the call on Friday and Saturday were on the road for the 7-hour, 500 km + trip from Hua Hin to Kanom again. My last submission was on a temple ceremony for the dead there so death seems to bring about some big ceremonies. A chance for everyone in the community and elsewhere to come together. Oh, they come from all over Thailand for these 5-day rituals.

We arrived in Kanom late in the afternoon to find the coconut plantation grounds leveled and canopies being set up all over the place. A few of the coconut trees had been chopped down to give more area for the canopies. 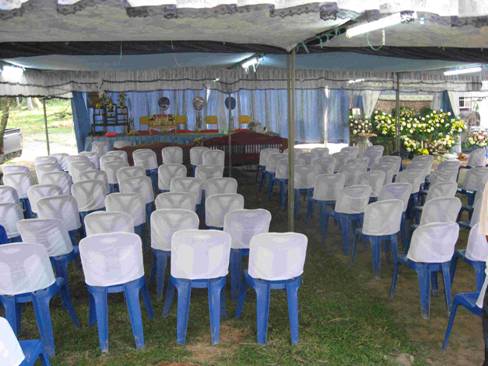 Refrigerator humming away with the body inside. 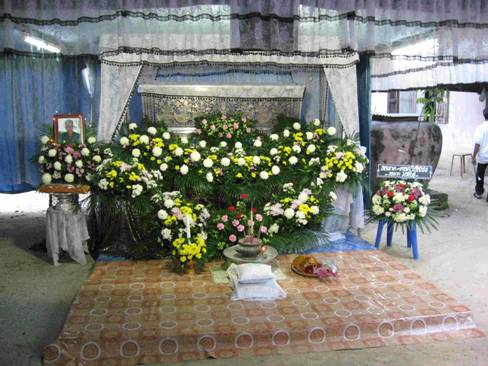 Of couse food is part of the whole deal so you have to have quite a few to help you prepare, cook, serve, clean-up and wash the dishes. Festivities like this usually draw hundreds so cooking in mass is the key. Wife said that almost all of the food was donated by friends of the family. 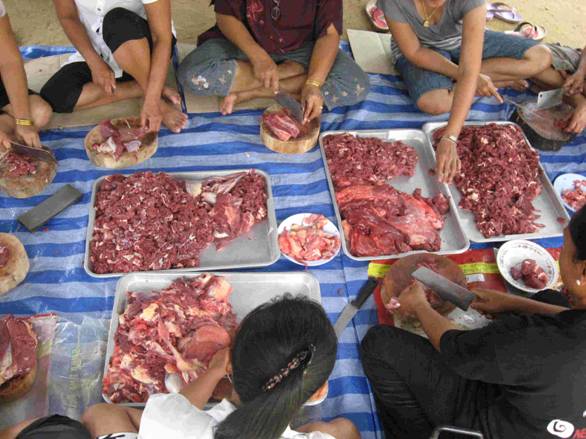 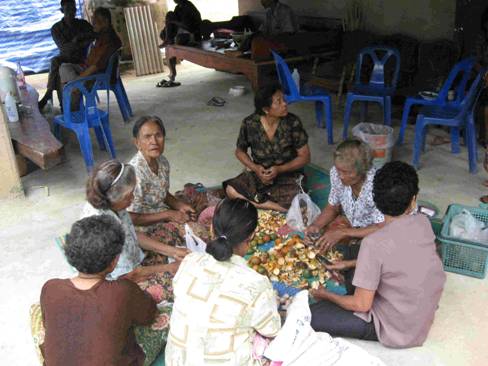 I was the only farang present at this pick-up truck and motorbike only crowd so got lots of looks. In this area of Kanom, a farang is rarely seen. If I could only talk Thai, it would be much more interesting. Stick is right on that one.

Wandered the coconut grove grounds and found a charcoal oven. Haven’t seen one before in my 3+ years here. Soil in one area, where they must have one time ground the coconut shells, was soft mulch, appearing to be a great planter mix. 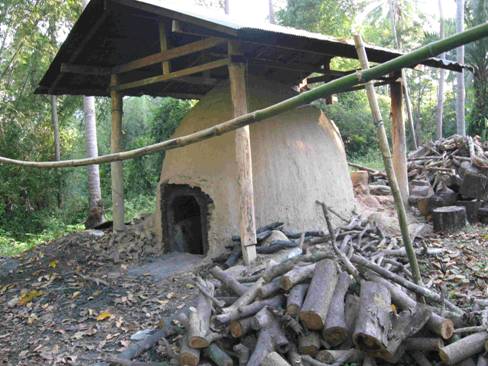 First night was not a large group, only about 100 – 200 there with most men, as usual, sitting in the back as far as they could get from the monks and the women either working in the food area or sitting in another section closer to the monks. Every time I go to one of the Thai religious activities, the seating always seems to be the same.

There was a bit more activity in the food prep area and you can see earlier pictures that the selection of food being prepared is quite interesting.

Chop open coconuts and grind the white flesh out of the shell and prepare the mush for some dish. 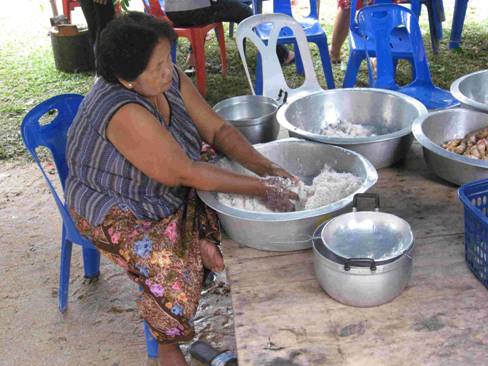 Anyone for some animal innards? At least when cooked they don’t smell like Chitlins (for you knowledgeable southerners of the darker-skinned variety of Americans). 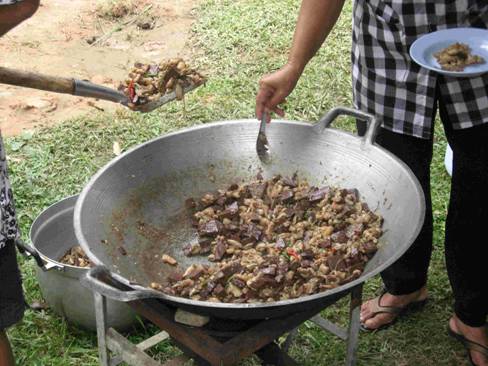 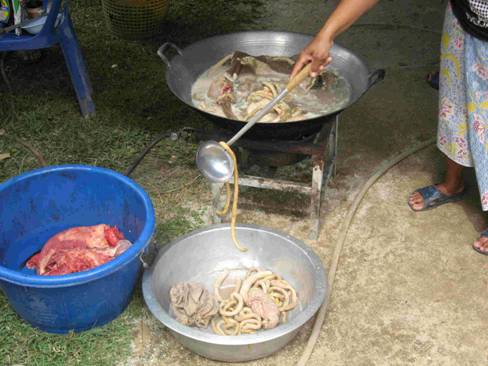 I really liked the “butcher” who was cutting up the carcass of something, be it pig, beef or buffalo. Note the precision cutting instrument and board he is using as his chopping block. The Thais don’t waste any part of an animal they cut up. 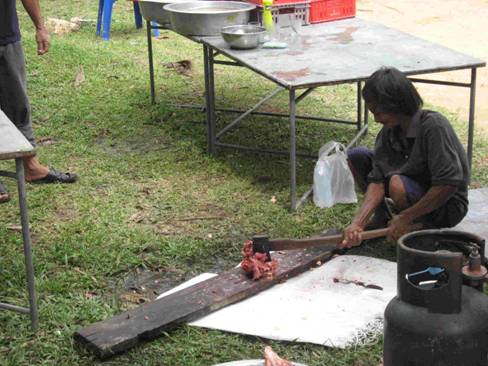 Where do you think the pig that had been kept in this pen was now? I’ll bet he went the first night. 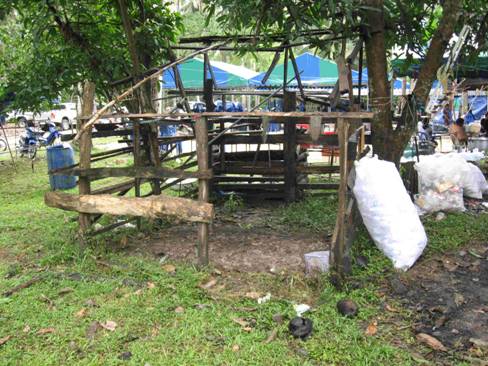 On a rise behind the main house was the dish washing area. A large pit was dug in the whole next to it to fill up with the garbage and trash. The last time I saw it it was looking like it was surely going to be overflowing after the last round on site on Wednesday. Large backhoe comes in handy both digging and covering up this area. 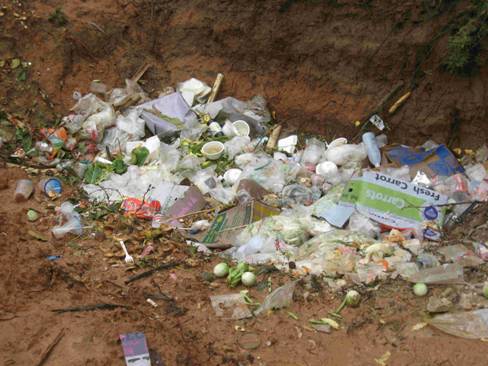 Note that the bottles are neatly thrown in a pile for recycling. Wife said that the “hooch” was sold at cost to those (Men) who needed to quench their thirst. 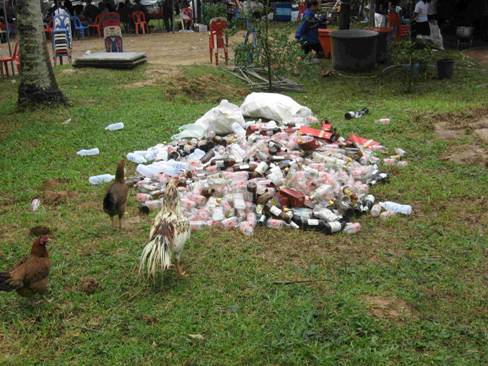 There were over 1,000 in attendance. Ran out of chairs and food and had to kept be preparing until everyone was finally fed which was well after the nightly 7:30 – 8 PM chant by the four monks. Yep, the Ta, Wa, Ma, Moo, Ba, Ka chant was more interesting the third evening. Head monk had trouble doing his Ta, Wa’s without coughing continually. Second in command was given another mic so he could continue while older monk kept chiming in when he could. Head monk must have been well respected as he was certainly the last monk to exit the platform and complete his conversation before he finally got into the car with the other waiting monks.

Today I experienced a physical disaster and am staying home in this beautiful wooden Thai house. Yes it's January and the dry season. Not here! Has rained several times each day so far. Today was the longest and hardest rain which has made the funeral site a quagmire. When walking barefoot down the front stairs to retrieve my sandals and go to lunch with the wife, I slipped on the shiny teak wood plank steps. Mist from rain had blown in on the steps and was so hard to see that I went stepping normally and foot took off and I slammed my back into them and hit my face on the railing. This sure slowed me down for more than a few days. (3 weeks later now and I am still score). Fortunately nothing appeared to be broken and only badly bruised back muscles that seem to be connected to almost every movement I made. My biggest concern was being able to use the Asian toilet in the house without being in great pain suspending myself over it. 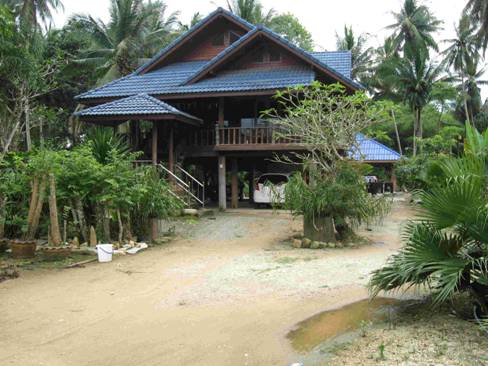 The wife finally convinced me to get some pain medication. The good thing about Thailand for medication is that all anyone has to do is find the nearest pharmacy (go into town) and tell them the problem and they give you the pills they think you will need. Muscle relaxant and another for pain. Don’t have to see a doctor and get a prescription for these as I would have to have done in the States.

Staying here at the house tonight I can hear the chanting (awa, toa, ah, wah, tah, etc.) now from the funeral site about 400m from this house. Wife must be in her zone there as she spends so much time over there and comes home around midnight. Her old friends and schoolmates are all suppose to be there tonight and they so much enjoy just gossiping away when their together.

This evening is the last night of the nightly ceremonies. Throngs of people again and the grounds are quite a sloppy mess due to all the rain. For the first time I really took note of the motorbikes. Hundreds of them parked just off the roadway. One thing I did note was the preponderance of the non-automatic units. In Hua Hin, were I live, there are a great number of Honda Clicks, Yamaha Finos and other automatic transmission models. Appeared to me that less than 5% of the bikes here were automatic scooters. Of course Kanom is a small town with people living all over the “jungles” there where motorbikes are much easier to get around on the dirt roads that can get rutted badly during the almost constant rains there.

Oh, the monks did their thing again and the Ta, Wah, Nu, Na, Oh, Wah, tow etc. Didn’t stick around much but am sure the gambling came out after the ceremonies as was the case every evening.

Oh, did it rain again early in the morning and for a long time. Had to be at the site by 10 AM as this was the day they were moving the body to the temple. The usual ceremony with the monks and all their Ta, Wah, Nu, Na, Oh, Wah, tow etc. then all the flowers, wreaths, bouquets and things around the casket were removed and put into the old trusty pick-up trucks for transportation to the temple. Another pick-up served as the hearse with the sides and front of it also being decorated with wreaths and bouquets of flowers from the site. 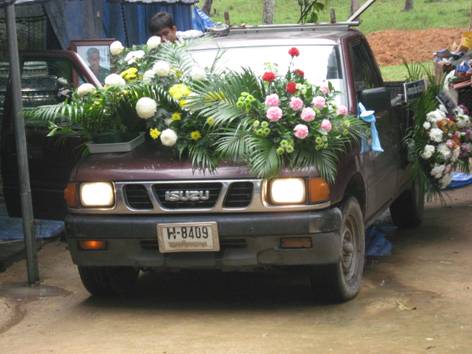 I could not pass up this one. Note the “official” photographer in his black cowboy hat, black t-shirt and jeans. Stick, is this what you look like when taking pictures? <I might be a feature at Cowboy, but I don't own a cowboy hat! – Stick> 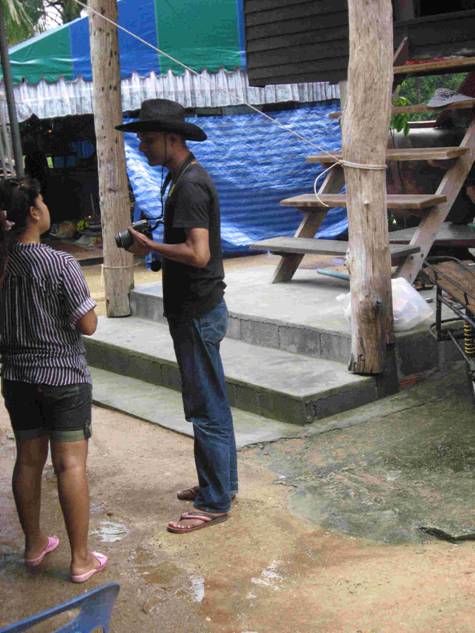 We left early to avoid the crush of the funeral procession. They marked the cars for the funeral with colored towels tied to the right side view mirror. As we pulled out we could tell the way cars were lined up that it was going to be a very long procession.

The hearse arrived at the temple. 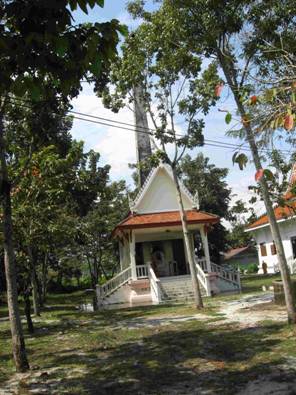 With the immediate family members standing to the side of the casket with one of their hands on it. Casket was offloaded and placed in front of the furnace. 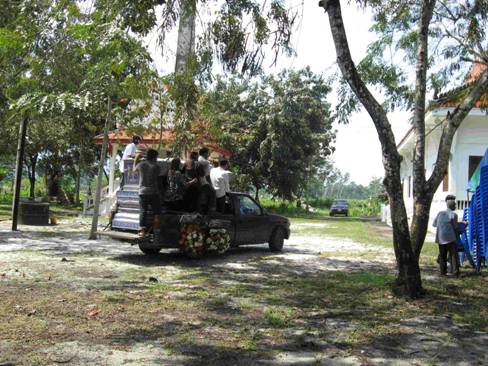 Another ceremony was held in a hall adjacent to the furnace and was attended by 15 monks so the Ta, Wah, Nu, Na, Oh, Wah, tow etc. had a colorful sound to it inside the building. The envelopes (with money) were handed to the monks in appreciation for attending (as was done after each ceremony during the 5 days) and the people filed out of the room and paid their last respects by filing by the casket in front of the furnace. The body was then moved into the furnace by the family members and the oven closed. Don’t know when the burning would happen as I could see no smoke rising from the chimney when we left the site.

Whole communities really unite for weddings, funerals and other events as those events serve as gatherings for all to catch up on each other’s latest events. I left being very impressed with how the people all pitched in and helped with every part of the event. No one is paid and everyone seemed to want to do his or her part just to help. In all the whole 6 day experience was very rewarding for me.

Thai funerals are much more colourful affairs than what we have in the West and much less somber. You're a brave man staying for 6 days. I am usually bored after an hour or 2!