I’m writing this still emotionally fresh from several encounters this week which have left me with a sticky bitter taste in my mouth I can’t wash out. I’m sure I’ll hear several of you saying “I told you so..”

Recently I’ve had some pretty spirited discussions with a close Thai friend centering around the different classes of Thais. She’s from a privileged but not spoiled class, and has only moved up from there. She’s earned her position and puts in more hours a week maintaining her loft than most people would be willing to work. I found myself torn between admiration for her accomplishments, and total disdain for her view on the lesser classes.

You see, I came from those lesser classes in my own country. Those who didn’t have. Those who weren’t to be educated nor advanced. I would never be one of them even though I went to their schools and lived in their community. My kind was a necessary evil; all towns need plumbers and street sweepers and those who serve. And being white we were slightly more desirable than the illegal Mexicans popular elsewhere. At least 4 – 5 of my friends I attended high school with are now A list Hollywood actors. There are more in the grades above and below me. I cut my sexual teeth on then high school girls, who later the world drooled over on the silver screen. And among the privileged rich who surrounded me as I grew up, no matter if my education now exceeded theirs, to them I would never be more than an educated nigger. (I use the word “nigger” in the harshest traditional sense, not as a racial slur. I use it for the impact it provides.) An outsider. A lesser class. I left when I was of age and never returned.

Thailand is different, but the same. They speak a different language and practice a different culture, yet the classes remain. Those who have and are expected to advance and achieve, and those lower classes, those Thai niggers, held in a systemic cultural class denied the education and advantages of those who rule through economics and politics. Without a doubt, this is my least favorite part of Thailand that I’m increasingly finding it hard to overlook.

I’m sure we’ve all been friendly with the service staff, but do you know their families and the names of their children? Do you invite them into your home to share a meal and experience their mindset? Have you become involved in their life in a way to offer help which may be beyond their experience or resources? Have you sat for hours listening attentively to the story of their lives? I have. And much more. Those who have given me the chance have come to know me, and me them. The thing is, these experiences have largely been of my choosing. My choice and my timing. But as a white farang there are times when you won’t be given the chance, and you wouldn’t choose if they did. There will be times when you’ll be judged only on the color of your skin and the perceived opportunity of the color white.

Last week a client and I were traveling down Rama II (Highway 35) headed to the boatyards in Samut Songkram. My car was in the right most (fast) lane with but a meter or two between my car and the concrete center divider. Out of nowhere a young Thai man in a large passenger van piloted his vehicle between the concrete center divider and my car. The force of the impact was severe, the rear wheels left the ground as the truck tried to flip over, and only a quick correction kept us upright. My client and I were both shocked, but not surprised when the driver kept going and didn’t stop.

Handing my DSLR to my client I asked him to take pictures while I drove. We followed with headlights flashing, horn honking, and the left signal flashing, hoping he would pull over. Other drivers who had seen his actions impeded his progress so he pulled over to the side. I expected and received a confrontation. Asking my client to stay in the car and call the authorities if things turned ugly I exited my car, exhibited no anger, and motioned I merely wanted to exchange information for insurance purposes. He took one look at my white skin and got back in his van and drove off with only a sneer. I’m sure in his mind a farang didn’t rate. We had no rights, and he wasn’t expected to practice the same legal procedures he would with a fellow Thai. I chose not to pursue, but only after ensuring we now had proper photographs. 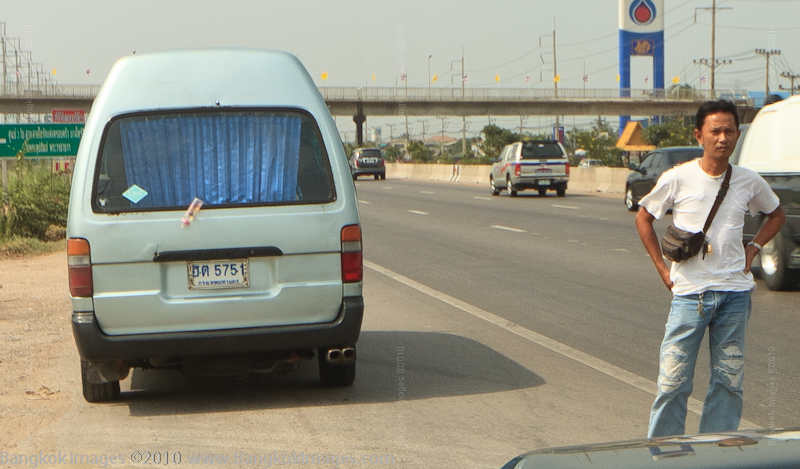 At this point we pulled over, called the insurance, and eventually ended up at the local police station with the insurance agent asking to file a report. The police heavily discouraged us from filing a report, telling me I’d need to return at 0800 the next morning (knowing I lived in Bangkok) and would need to bring a qualified interpreted / translator. His message was clear, you are a farang and he was a Thai. Only when I insisted I would file a complaint with my embassy did he agree to meet the next morning.

The next morning I was there at 0800 with a qualified interpreter / translator. She introduced herself as a Chulalongkorn Professor and he checked his attitude. She introduced me as retired military and a police officer of 5 years from America. We had his attention. When he hesitated, I asked “if a Thai reported a farang out on the highway slamming into cars and then leaving the scene, you’d have every resource available trying to find him wouldn’t you?”

During the next few hours he appeared to change his tune and promised to pursue the individual and even said “this is a matter of pride, this is Thailand and we cannot allow such behaviors.” I think he was sincere, but I’ll only know when/if I get my promised court date with the offender. At a minimum I’m satisfied a very thorough report was submitted. It took him all morning and we checked every word.

A few days pass as I go about my life. Driving right outside my soi I move my truck over as much as possible to make way for a homeless wheelchair man I’ve written about previously. Other cars whizzed within centimeters at speed. I moved so far over my fender flare lightly touched the mirror of a taxicab and moved it forward. As everyone knows, mirrors are designed to move back and forth for exactly such reasons. I park, examine both vehicles to make sure there was no damage, look around for the driver, and seeing none I head in for my haircut.

Halfway through my haircut a lady walks in saying I “ruined” her husband’s taxi and would require immediate payment. It almost broke my heart to see that she, her husband, son, and the crowd which gathered in their support exactly fit the description of the “lesser classes” my friend and I had argued over. It was obvious what was going on. The owner of the taxi was eating at his wife’s food cart, saw what happened, knew there was no damage, and after I went inside they must have talked about it and decided to fleece the farang. Money was demanded, threats made, words said.

Interestingly enough another lesser class came to my aid. The lines were drawn in the sand. On one side the very poor, very brown Buddhist Thais who were trying to fleece the farang, and on the other the equally poor but more principled Muslim Thais of my moo-ban. The hurt, and the pride. The type of people my privileged friend warned me about, and another type of people I’d argued for and supported. Both lesser classes, both Thai, but as different in principle and values as night and day.

Even though there was no damage I decided to call the insurance company to defuse the situation. Minutes later a representative shows up, listens to everyone, and then tells me “they’re trying to get cash from you because you’re a farang. Let me handle this.” And he did. And I went home.

Home now I decided to write this while the emotions were fresh. I apologize for the poor writing, but I won’t be proofing this before sending it out. My goal is to record my thoughts fresh and as they happen. Warts and all.

I have a new respect for my friend's position. And reinforced respect for mine. It hurts there is no immediate or even long term solution. I fear nationalism, racism, and class wars will always be with us. I want to put my head in the sand and tell you they won’t be. I want to pretend there will be solutions because I prefer to live in that world. But it wouldn’t be real. I find myself upset to the core.

This is a damning indictment of the locals, on so many levels.

This extort / rip off / cheat the foreigner nonsense seems to get worse every year. It has always been there but it is MUCH worse than it used to be.

I also have to say that my experience with Thai Muslims is the same as you relay in this story – they are people of principles and not morally bankrupt as many poor Buddhist Thais are.

I hope the police catch up with the van driver.

Kinda glad I didn't take your offer to join you on that day out!

The Gravity of My Hell