The Maithai writer has written me as well and I appreciate his concerns. Certainly, after living here since 2003, I should have some awareness..

The thing I want to communicate to him and others who want to come here and savor these treats is that we need to ask ourselves how much our planning has to do with objectivity and how much with rationalizing?

If one thinks they can enjoy dropping 20,000 on a rental unit and then some extras for cable TV, because with the remaining amounts there aren't going to be many women around for entertainment and books are not cheap here, they are setting
themselves up for some stress..

I'm wondering how he imagines a free girlfriend here? I don't think they are anywhere….But, here, with their friends lying to them about outrageous bounties they've raked in, she's gonna lay some tricks on the table.
Because she wants to look good to her friends more than she will respect your financial well being. <If you're taking about bargirls or low class or no class girls – Stick>

Now, I think the writer is younger than me and therefore may have a better shot at a girl who isn't totally Jai Satang, but, I still think our primary attraction to women is our ability to provide stability and help them make their nest
(which may not include us)…

In my early years here, I lived in Phuket on a larger initial pension than I now get and that was a blessing because when we first get here our pent up sexual desires get fired up and we are quite active, usually going after those trophy
girls totally unavailable back home and maybe even believing one when they tell you they are falling in love. Those days I know I spent close to 200,000 baht per month and I am a non drinker and was 57 years old. After some time, I realised things
were twice as pricy in Phuket with lower condominium quality and decided to move to Pattaya to not go broke.

Pattaya has some of the most clever women on earth in the gold digging arena and they come in disguises a blind old fool can seldom see i.e. school teachers, shop girls, masseuses and go go girls who are "different". It really isn't
a bad place once you know how to live here as it is by far the most farang oriented place in this country and I've had the police side with me and Thais run after me when I dropped thousand baht notes by accident. Like all the rest of this
life there are shades of grey. Thais are actually poor people for the most part who don't worry about food. They do not respect foreigners who casually throw money around and it is important to show them you are not stupid, yet not silly
cheap.`You can live and have fun in Pattaya on 60K, but your rent ought to be 8,000 then. And, you have to negotiate with everyone for pretty much everything.

If sex on soi 6, 7, or 8 is acceptable to you and three times a week, after bar fines and some drinks, there's pretty much 24 to 30K of your monthly budget at the least, regardless of how cheap your buddies claim to get by for their
own self promotion as "smarter" than you guys. This assumes alcohol is not in your life.

Girlfriends from 10K to the sky are available on monthly deals, and they don't like losing their "jobs". Sometimes a person wants to travel around the country, maybe by bus. If you can't speak Thai, the employee / girlfriend will be
along. These trips become necessary after being around town and watching 300 pound fifty year old white men with 8's, 9's and 10's walking around shopping and you know that guy is throwing down some money you ain't got. If
you don't think what I'm saying is real, fall in love with a beautiful girl and lose her to more money if that hasn't already happened to you in this life. It will here.

And, if you tire of sidewalk jostles and pickup truck ride waits, maybe you want to take the adventure of buying a motorbike (50 – 70K) and going down the never boring path of Pattaya riding with a likely hospital visit (mine was 60K in 2005).
But decide a car is safer and you will soon find out that they are not cheap here.

The fellows I know and myself live on around 80K to 100K depending on surprises and that's with owning nice condos of some size so the monthly outlay for TV / electricity / water / and internet are somewhere around 5,000 baht. At 64,
I don't need a girl everyday and I always have more money than if I have a rent a wife, so I like to take them as needed and at my timetable and not theirs. This budget is conservative in my opinion as every friend I see who drinks spends
over 3K a day to get by. 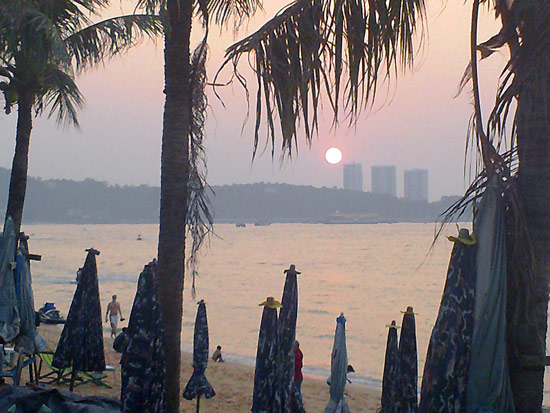 Sometimes, the routine gets oppressive and a trip to Cambodia (if your passport doesn't have too many stamps for USA customs to Gestapo interrogate you as an assumed pedophile), or the Philippines might be desirable. Angeles seems to be the place
we go and some local lovebirds take their Thai girlfriends (not trusting your Thai girlfriend?, how can that be?) So you scrounge around for a middle of the night flight to Clark and usually pay $150 or more, then get to check in a close to $50
a night hotel at 5 AM thereby buying another day. So, the girls cost 50% less than Thailand normally (unless you 6,7,8 it here). I'm only putting this down so our friend gets some ideas about how expensive it is..

Lastly, I've been fortunate enough to have lived in the USA, Europe, and Asia and know that anywhere you go, there is a budgetary learning curve. I hope our friend and any others coming here can get something out of mine.

There are pressures and what worries me most about the newer guys is the girlfriend who seems so inexpensive at first. Her family more often than not believes you have a money tree in the backyard.

Just to provide some balance to a few points you make. 20,000 baht a month is around the starting level for decent accommodation in central Pattaya, in my mind. I have seen guys paying less than that in central areas and have not been impressed. Further from the central areas prices drop.

Som Nam Na (AKA Conversations With My Conscience)