Acculturation of a Karen into Modern Society

With all the talk on this site of the women and their carnal pleasures, dishonesty, thievery & such, a few of us here in our complex have met one of the most wonderful women that we have ever had the pleasure of knowing here in Thailand. We have just been astounded with the specimen of Thai rural life we have learned to hold so dear.

We first met Yek (not her real name) as a member of the labor crew that built the houses in our complex. Short, thin, round faced and strong with a smile on her face most of the time, se works for 200 baht per day doing what we would never consider doing such as backbreaking manual labor in the hot Thai sun. From digging holes to lugging anything around on the back or arms and slugging around in her trusty, flip-flops.

She lives in the crude corrugated metal shacks behind our house in conditions that would scare most of us away. Outdoor plumbing, showers (with clothes on at the trough), no cooking facilities (other than wood), wash clothes at trough and scrounge for good drinking water. 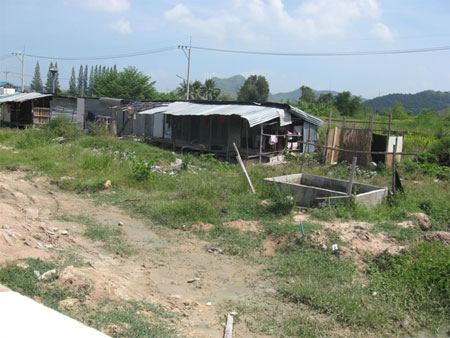 We all first met her as part of the labor crew when we “discovered” (when the stuff overflowed the toilet) that our sewer was not connected to the tanks but pipes just ended at the edge of the foundation of the house. Yes, three days of backed up shit and everything else was awaiting them when they dug down for the trench to run the various pipes to either the sewer or gray water tank. The guys always dug but the girls always hauled the dirt out in bags so they could return it easily. A fair division of labor? Men dig and women do the heavy labor.

Yek was still smiling late into the night when the pipes were finally connected and we were once again able to use our kitchen and bathroom facilities. As upset as I was that someone had forgotten to connect the pipes before we took possession of the house, I could only marvel at the resilience of this labor crew and that one girl with the round face with a continual smile on it.

We kept running into the crew and at the end of the day on several occasions Yek would volunteer to do the watering or anything else we were doing in the yard at the time. At first, I declined her offers figuring that she wanted to do something for me to get something from me. Later I found her at my neighbors’ house watering their lawn. She kept insisting that it was OK and she wanted nothing for it in return. Neither my neighbor nor I could believe that she was so “giving” of her time and energies. Both my neighbors’ Thai girlfriend and my Thai wife slowly started gaining a relationship with Yek and found here to be so honest and giving far beyond what they were use to from most Thai’s. Of course next was the giving of gifts (food) to Yek along with other small items.

My wife and friend could not believe that Yek did not know what shampoo was, let alone ever use it. They were aghast at that revelation. They gave her some but I do not think she has ever used it yet. They could not believe she did not have a fan as she had said she often woke up with mosquito bites on her exposed skin. The girls had be buy a smaller fan and we gave it to her. When asked if she used it, she said it made her too cold. We do not know if she has used it yet as it has gotten warmer lately. The point I tried to make to the girls is that when Yek moves, she cannot take much with her. Her clothes are about all she can take when she moves anywhere, as she has no transportation.

The Thai girls had a difficult time communicating with Yek because she is from a Karen village and normally speaks her Karen language and does not speak good Thai. They learned that Yek does not have any papers, as somehow the Thai’s don’t recognize that some people born and living in Thailand for generations have any rights to Thai citizenship. I had read in the newspaper about those people but meeting one in real life really brought it home.

As time went on, we started using Yek more and more to take over the yard maintenance (since we had cancelled the service from our builder due to poor service). One morning when I was heading out for my 7am run, Yek wanted to mow the lawn with my neighbors’ electric lawn mower. She had it all set up with cord plugged into extension cord and everything spread out. I watched her try to operate electric mower. It became obvious that she had never seen or used one before. She pushed a button then pulled the lever in no sequence and nothing happened. She was puzzled. I quickly jumped in and demonstrated how you push the red button and hold it down until you squeeze the “dead mans” switch to keep the motor going. When I returned from my run, she was trying to figure out how to get the string on the string trimmer longer. I showed her how to pound it on the lawn and the string is supposed to come out. Next, I showed her how to take the string out of the trimmer and adjust it when it would not adjust itself. Oh, for a retired teacher to watch the lights go on in her face and see her so excited to learn something new was priceless. 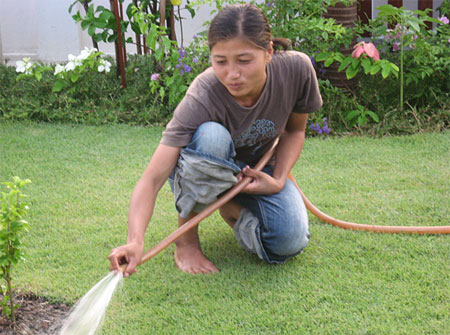 After this experience, we decided to let Yek take over the yard maintenance of our yards permanently and of course, pay her accordingly (though it is difficult to get her to take the money at times). By now, we have gone on trips and completely turned the yard over to Yek in our absence. We have always returned to yards looking greener and in better shape than when we left.

The sad part to the story is yet to come. She told us a few weeks ago that her job at the site would end soon and unless she had a job and a place to live, she would have to move on to another area where she might find work. Since she told us that, we have found her two more yard jobs in the complex that now allow her to earn (from all the yards she works) over 5,000 baht per month so the income problem has been solved. Next, we have to figure out how to solve the housing situation. Our efforts are on the housing situation so we do not loose this hard working, thoughtful and wonderful Karen woman. There is a very large house in the complex that employs a full time gardener and comes with (real) housing, refrigerator, LPG burner and bathroom. If we can convince the owner of that house that Yek will do a better job, the housing situation will be solved. We have already planted a seed and are doing our best to nurture it.

Guess I am a sop for this stuff and, as a former teacher, watching people grow and improve is rewarding to me. Thailand is always so interesting.