Just been to Pattaya for a couple of days to meet a mate from the UK. The Mrs. came with me as her gang from Korat decided to have a birthday party in Pattaya. One of her mates told us not to worry about the hotel as she would arrange it for us. That turned out to be a unmitigated disaster (I don’t want to change hotels after the first night on a two night stay!) and I ended up having to drive around and look for one. Found a place pretty quick but I wanted to check out the room. A member of staff was given the room key and told to escort me to the room. He walked at a pace slower than someone in hospital pushing their own IV drip stand but it was more annoying when he stopped twice to talk to other members of staff for a few minutes at a time. I was close to walking out but kept my calm as we needed a room quickly. Anyway, room sorted. Then a really great thing happened. The Mrs. knows that cash is somewhat limited at the moment until I start my new job in Singapore in March. She insisted that I take her offer of 1,000 baht to help out with the hotel cost. A nice surprise and that is in addition to me being forced to cut her monthly allowance by about 90%. All good signs.

Next it was time to eat before meeting our respective pals. She was approaching malnutrition as the journey from Bangkok is around two hours. We specifically chose a restaurant that was quiet so we could have a chat before going our separate ways. We were the only customers (being around 4 PM). Within five minutes they turned on the sound system and started blaring out rap music, just for us. Bunch of morons. We ate like refugees to get out as fast as possible.

I decided to have a wander before meeting up with my mate. I started at one of my favourite haunts, Tim Bar on second road. I’m not really into the go-go scene but there always seems to be a decent atmosphere in there. However the main reason I go is the pool hall behind the go-go bar. Good tables, good cues and a nice bunch of girls, some of which are damn good players. I don’t take the game too seriously, it’s just a nice way to spend an hour before the night begins. Buy the girls a drink or two and have a bit of a laugh. However I have noticed on a few occasions that some of the customers are real twats. Not a word spoken to the girls or a drink bought for them and the game is taken far too seriously. Some of them bring their own cues and even wear a glove! W****rs. You could understand a professional player having his own cue and glove (but why wear a glove?) but in a Pattaya bar! Some odd people out there.

I then wandered down Soi Diana and came across another pool hall called Megabreak. Strange atmosphere and there were quite a few local hustlers in there. I though my pool was fairly good until I played one of the hustlers. Three hundred baht down after three games (they were not interested unless money was involved). The thing that struck me was that they were a really arrogant and unfriendly bunch of buggers and even the bar staff seemed afraid of them. I got out soon after knowing how Thai guys can become pretty aggressive after drinking. One guy got quite pissed off because I wouldn’t play a game with him. I’m not completely stupid, a hundred baht a game isn’t going to break the bank but I know when the opposition is going to thrash me. Apparently a few nights previously there was a fight on Soi Diana involving farang and Thai. You guessed it, six Thais against one farang. Apparently this farang could handle himself and was helped out by a mate. The fight went on for half an hour and ended without too much bloodshed. Starting a fight is such a stupid thing to do, especially here in LOS but I find more than one against one such a cowardly act.

We met up and hit the town. Not much to say about it really. As mates do we had a great chat and a laugh but we could have been in pub back in the UK for all the entertainment that was on offer. The girls were rough and the majority of the bars were crap and most of them had that awful live bloody music.

Next day we decided to go to the go-kart circuit. I really enjoy the go-karts, especially racing against a mate, great fun. My lack of fear was soon to end when a farang had quite a nasty accident resulting in horrible burns to his legs. I slowed down after that. This sign made me laugh. It was located in the spectator area next to the track. 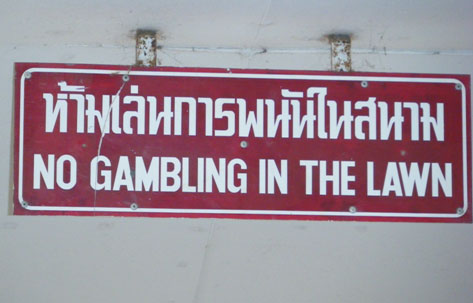 I understand they want to discourage gambling but the sentence as a whole makes no sense.

I spent the last afternoon and night on my own as my mate had to do some urgent work remotely from his PC for his company in the UK. So off for a wander again. Had a stroll down Soi 7 and decided to people watch from a bar. Most of the tourists consisted of tattoo clad, bare-chested hooligans (most likely Brits), some of which seemed keen on a fight. The rest looked like they could pass away at any moment. Then a strange sight. A farang wearing a colourful costume and top hat travelled down the soi riding a bike resembling something out of a circus, covered in decorations and flowers. Never seen that before. What was he up to? A bit more wandering and ended up in a bar on Beach Road for a bit more people watching.

Then a scene developed which really disturbed me. A farang guy and a Thai guy were stumbling along the path next to the beach and were clearly on something stronger than alcohol. They were out of it. They approached a group of locals the Thai guy knew. This group comprised three men, a woman and a child; the latter was the disturbing element because they weren’t doing anything, just sat down like the hookers do. There seemed to be some encouragement to the child to approach the farang and the woman (I assume the mother) walked away. Something seemed very wrong with this situation. Thankfully nothing transpired and the drug crazed couple moved on. I may have completely misread the scene but your mind thinks twice in this country when you know the sick things that happen.

Another sign caught my eye in a car park previous to my meanderings. I really can’t work out what they were thinking when deciding on the wording here. 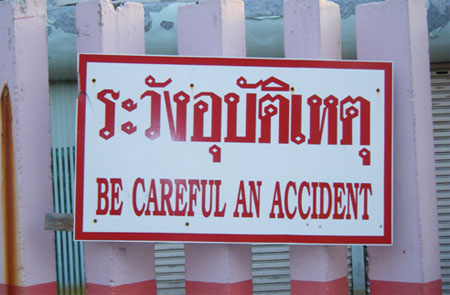 A bit more wandering and I noticed a few of these ‘cocktail buses’ that have sprung up recently. Quite imaginative, aren’t they. 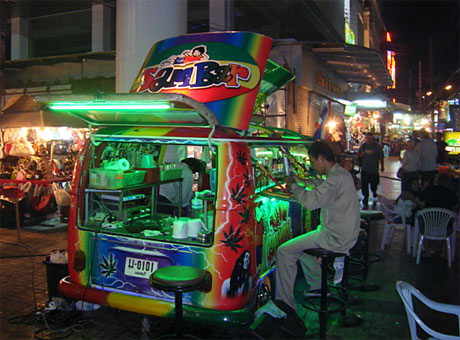 After a few hours of hitting the bars on my own it dawned on me how utterly bored I was. I realised that I had actually developed an appearance that said to the girls “do not talk or even acknowledge this man, he is seriously bored”. I really can’t take the endless questions regarding my nationality and name. It drives me up the wall. So an early night it was. I now know never to go out alone in Pattaya for fear of dying of boredom.

I quite like wandering alone around Pattaya. I enjoy watching the freak show! But more than anything, I like carrying my camera and just snapping away although these days it helps to use a telephoto and keep a distance.

Getting Fleeced – Exposing the Underside of Hanoi