I’ve been working in Thailand running a factory for the past two years and just finished my work assignment. So on my last working day I was to cancel my work visa, get a seven day extension and then switch to a spousal visa as I’m married to a Thai national.

Canceling the visa was no problem and this was done first thing in the morning where the visa was issued, at the One Stop Service center on Phaholyothin Road. Then I was informed by the agent we used that One Stop didn’t issue the 7 day visa extensions anymore (so much for it being a one stop center!) and I would have to go to the Immigration office at Suan Plu to get the extension. She helped me fill out an application and sent me on my merry way.

I arrived at the Immigration office and the first step is to get a queue number prior to meeting with an officer. The person giving the number was confused about the 7 day extension and told me they required a termination letter before giving me a number. So I made haste back to my house to print off this letter and got back to the office. Strangely enough the queue person no longer cared about the termination letter and I got the number without any questioning. I took a look at the number and saw there was a wait of 37 people ahead of me: it was 10:30 AM.

The wait in the immigration area leaves a lot to be desired. The air conditioning barely works so it is very hot and stuffy and packed with foreigners of all types so it is noisy with many languages spoken and also is a bit smelly. I sat and waited for 2 hours until the officers all left for lunch at 12:30 or so. Looking at the numbers being called only 11 people had progressed in these two hours and 4 separate desks were devoted for visa extensions!

When the people came back from lunch I was hoping they would pick up the pace but this was not to be the case. I witnessed one customer reading the palms of an immigration officer for about 25 minutes and the officer was really enjoying this. Unbelievable. There was also a printed sign of which I’ve taken the following picture: 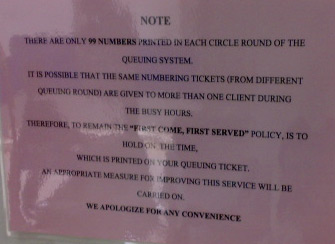 Clearly this was written by a non-native English speaker. Each queue number is 3 digits with the first being a fixed number for the type of transaction (business or non-business) and the second two digits to represent the queue number. My number was 975 so I was number 75 under station 9 and I understood this sign to mean that the last two digits would go to 99 then start from 00 again upwards. You will notice the last sentence: “We apologize for any convenience.” Truer words were never spoken!

I was starting to get worried as my visa was only good for the same day once cancelled and didn’t want to have the problem of overstaying – I had contacted my Thai lawyer and he told me if I overstay then I have to leave Thailand to reapply for spousal visa at a foreign Thai embassy prior to getting the official visa! Visa issues are such a quagmire in Thailand.

The person sitting next to me had a queue number of 995 and I told him it would be a long wait as number 952 was up on the board after waiting two and a half hours from 938 when I showed up… I mentioned to my neighbor that I was just extending my visa. He told me to take a look at counter 5 where I should be able to get this quickly. Just to be sure I went back to the queue booth and showed them my documents again and this time the person gave me a number for another station (806!!). Now I was starting to feel more frustrated and I went to counter number 5 and saw a sign for 7 day visa extensions. When I talked with this officer she told me I would have to go to One Stop Service to get this! I called the lawyer again and he said if I can’t get the extension that day then I’d have to do a visa run to Cambodia! How did things get so difficult so fast? Welcome to Thailand. So I kept Jai Yen Yen and waited until my number was called… at 4:00 pm!

The officer saw I was waiting a long time for a 7 day extension and she and her neighboring officer had a good laugh at my expense. I told them in Thai: Ror Hok Chua Mong Gub Jed Wan Visa, Mai Saduak… Waiting 6 hours to get a 7 day visa, not convenient! and they laughed some more.

Then the officer told me she has to use the toilet and after reaching under the desk for a roll of toilet paper and pulling off 5 squares she then took off to leave me alone at the desk for 15 minutes. I had to feel bad for the people working here. They don’t have toilet paper in the employee bathroom? Amazing Thailand. After coming back I saw the officer joke around with some more staff and drink a bottle of Thai iced tea before coming back to help me with my application. 1900 baht later and I had a 7 day extension in hand.

Little did I know my problems were to increase later when I wanted to switch to a spousal visa.

The whole visa process in Thailand can be frustrating. I personally have not had to face any of these nightmare situations but many have. I guess I have been lucky.

“Experiences from ‘The Flow’ (3): LOST AND FOUND – Kindred Spirits and Mistakes made in Haste.”