Than has been my designated chauffeur for the day. He’s a friendly chap, dressed in a traditional, almost ankle-length, skirt-like longyi that leaves me wondering how he manages pedaling on his squeaky trishaw unimpaired. He tells me he has navigated along the wide, flat grid of streets of laid-back Mandalay, Myanmar’s second largest city, for 25 years already.

Mandalay is a city that finds itself snuggled into its setting on the banks of the mighty Ayeyarwady River, its potholed streets spreading lazily following a checkerboard pattern. Parts of the city look as if they are recovering from a strong quake; their vibe more easygoing than frenetic. And then there’s the dust. It’s everywhere. Even the palm trees are caked with it.

It’s after nightfall, and we are slowly cruising up downtown’s 73rd street in direction to my hotel. The atmosphere’s gloomy. There’s no light in the streets. Just clouds of black exhaust fumes and dust dispersed by the occasionally passing, fit for scrap truck and packed to the gunnels public buses. They blind us with their upper beam headlights and deafen us with their ceaselessly sounding horns. There’s generator clattering from the roadsides all around.

People are navigating the thronging, crumbling sidewalks in droves, dodging the miniature furniture of the ubiquitous teahouses and street vendors peddling everything imaginable, from knock-off sunglasses and second-hand clothes to glossy posters of Burmese models and movie stars. Trishaws and bicycles dive in and out of the clouds of dust, their riders hysterically ringing their bells whenever they are approaching a crossroad. Slowing down is not an option. Near misses abound.

Than is in good spirits. It’s been a good day for him. He has certainly made a nice profit from pedaling the generous foreigner around town all day.

“Mister, I pick you up tomorrow when?”, he asks enthusiastically, already soliciting business for the following day.

“Than, I don’t know yet, let me think about it”, I reply honestly, still being undecided how I want to spend my next day in the region.

Than’s starts fluttering: “But Mister, still so much to see! I know places very nice! I take you! Than good driver! I make you good price! Need money to buy pencils for school for my five children! Have three boys and two girls!”

I look ahead while we are approaching the next crossroad. With Than paying more attention to pushing his business than to the road ahead of us now, we hit several potholes he usually makes sure to circumnavigate.

“What are you kids’ names?” I ask him casually.

Before he has a chance to say any more we dive into another cloud of dust. I cover my mouth and close my eyes. When I open them again I am blinded by bright light. The trishaw sways sharply to the right. I hear a bang and I’m thrown out of my seat and onto the dirt.

Dumbfounded I look up. Than’s there on the ground next to me. The trishaw lies toppled over on its side. Next to it I see the flickering headlight of the small motorized tricycle that bumped into us. Or did we bump into it? I don’t know.

I quickly check myself for injuries, but other than a small bruise on my right elbow I seem to have made it through unharmed. I’m thinking the tricycle must have hit us at a very low speed. Than first looks shell-shocked, but is momentarily back on his feet and goes about shouting at the teenage tricycle driver who’s still sitting in his vehicle, all saucer-eyed.

Rubbing dust off my clothes and bag I watch their frenetic discussion right in the center of the still busy junction from the sidewalk. It’s mostly me who draws curious looks from other bystanders, not the scene of the accident.

Eventually the tricycle driver helps Than put the trishaw back onto its three wheels, I get back into my seat, and we go on as if nothing has happened.

Than looks down at me smiling apologetically and asks: “So Mister, I pick you up tomorrow when?”

Daw is my designated taxi driver for the day. He also happens to be Than’s, my trishaw driver, older brother. They show up with his rusty Mazda pick-up in front of my hotel perfectly on time.

Much unlike Than Daw is an unusually tall, quite slender and willowy guy. I feel there’s something peculiar about him, but yet I cannot tell what exactly it is. Quick introductions are made, and without further ado I squeeze myself into the poky passenger side of the vehicle. Than stretches out in the rear. We hit the road.

The car’s floor is covered with red droplets, obviously relinquished bits of betel made from the chopped nut and a paste of slaked lime. Jolting down the bumpy streets I try striking up a conversation.

“Yesterday your brother Than told me about his nice family! I forgot…how many children does he have?”

Daw smiles and tells me with the voice of a proud uncle: “Oh! My brother he has two children, one boy, one girl!”

I chuckle under my breath.

Traffic is dense. We are tailgating a heavy truck. Daw nervously taps the wheel as the car sways in and out of the lane. Driving in right hand traffic in a car originally built for left hand driving limits his view severely.

Myanmar introduced right hand driving in 1970, supposedly for the most part in an attempt to rid itself of its colonial heritage. With lots of pre-1970-era vehicles still on the roads, and many newer cars imported from Thailand, driving can be adventurous. Particularly for the passenger who gets to enjoy the dubious thrill of always spotting head-on traffic first when the driver makes another unpromising attempt at overtaking in the most inappropriate situation. 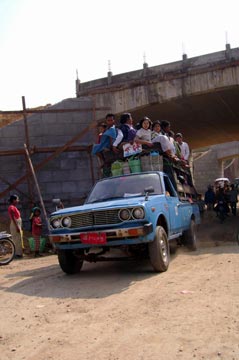 Approaching crossroads, as usual, all traffic slows down, but doesn’t stop. Intending to cross the upcoming intersection straight ahead, Daw scans for potentially conflicting traffic from either left or right. I spot the truck heading slowly but surely our way before he does. Finally his head spins to the right. He looks at the truck’s driver, and I can see the truck’s driver looking back at him. Still having approximately 15 meters between us, we are still moving, as is the truck. Still they are staring at each other, but none of them stops.

My knees crash against the dashboard. We have bumped into the truck. With Than and Daw, accidents seem to run in the family. 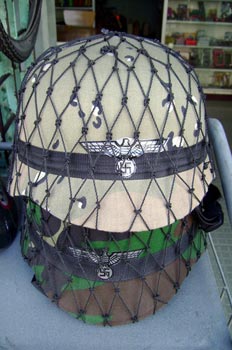 Less than a minute later the show is over again, and we move on.

Daw turns to me and apologizes profusely.

“Sorry Sir, this never happen before”

With his right hand he fumbles underneath his seat, pulls out a swastika-festooned replica Wehrmacht helmet and hands it to me.

“Very safe! Very fashion!” he nods at me enthusiastically.

The King And I