Ko Samui, once known as an affordable destination and a backpacker's paradise, is the second largest island in Thailand. It sits on the opposite side of the mainland from its bigger brother, Phuket. For so long the backpacker's domain, this island has been rapidly moving upmarket over the past decade and most of the development appears to be in the upper sectors of the market.

You can reach Ko Samui on Bangkok Airways and a return flight will cost you the best part of 8,000 baht for a flight that is a little under an hour. There are several flights between Bangkok and Samui every day. You can reach the island overland by travelling by Bangkok to Surat Thani by road and then taking 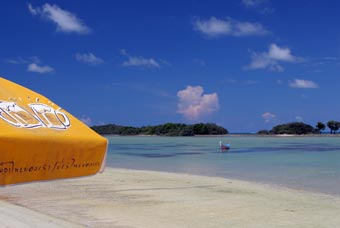 a boat across. This could take many, many hours and unless money is tight, I would fly. Khao San Road travel agents offer deals from Khao San Road to Samui direct. I am not sure what the latest prices are, but I should imagine it would be in excess of 500 baht.

Samui is a pain to get to from Bangkok. If you have money to spend, little time or both, obviously the quickest way to get there is by plane. Bangkok Airways which owns the airport at Samui has a monopoly and they are rather expensive to say the least. Current return airfares between Samui and Bangkok are around 7,500 baht. Why is it so expensive? Well, there is no competition, is there? Thai Airways does not fly to Samui and that is a great shame for prices are too dear when you consider that Thai only charges 6,000 odd baht for return airfares between Bangkok and Phuket which is a lot further away than Samui… And just to make things worse, Bangkok Airways uses these old ATR-72 aircraft, hardly the most comfortable planes around. It seems that with even the smallest amount of turbulence you are getting thrown around in the sky. Give me a nice, big American manufactured aeroplane any day!

The other options for getting to Samui are far cheaper but take forever. First there is the train / bus / boat combination which costs around 500 – 600 baht depending on whether you buy tickets directly or go through a travel agent. If coming from Bangkok, you take the train to Surat Thani, the bus from Surat Thani to the port and obviously the boat over the water. This journey takes upwards of 18 hours! Finally there is the bus and boat combination and this takes about 16 hours and can cost as little as 300 baht. The choice of expensive transport or a slow boring journey has kept me away from Samui recently. I would love to go down for a holiday but frankly, it's a hassle to get there!

Samui is dominated by two beaches, Chaweng Beach which is the largest and most popular beach and Lamai Beach which is a few kilometres south and also very popular, 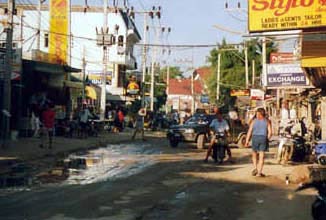 although perhaps a little quieter as it is smaller and has less places to stay than the heavily developed Chaweng. There are other locations all over the island including Big Buddha and Bophut. This photo on the right shows what Chaweng used to look like a few years ago – this is the MAIN road going through the area just up from Chaweng Beach and the main drag where shops, restaurants etc are. This general lack of infrastructure is what I did not like about Samui on my first visit but that has all changed and the infrastructure has been developed markedly since my first visit back in 1998.

Chaweng is all the action, dance and song part of Samui where people say that they have come for the "laid back atmosphere" but really all they seem to be doing is drinking, smoking all sorts of weird substances and partying until they drop. The beach itself is quite long and in my mind, it is nice but somewhat over-rated. For my money, you cannot compare this beach to Karon in Phuket or even Lamai, the other big beach on Samui. It is a few kilometres long so even with the hordes traipsing to and are setting up camp on Samui, you can always find your own little plot somewhere along the beach.

Lamai Beach is my favourite beach on the island, a gently curving beach that while a lot shorter than Chaweng, is nicer, in my opinion. Very picturesque, Lamai seems to feature in more postcards than its bigger and more popular brother, Chaweng.

While everyone does it all the time, it really is hard to compare Phuket and Samui as they are quite different. Phuket is THE Asian international beach destination and Ko Samui is the up and coming star. Phuket has lots of high rise hotels while at this stage, Ko Samui does not, but I would not be at all surprised to see this change in the VERY near future. Phuket has a reasonable infrastructure with sealed roads all around the island while in parts, Samui has dirt track style roads. Phuket does not really appeal to the budget traveller or backpackers whereas Samui does. Samui does not have much of a sex tourism scene though it is growing. Compare this with Patong Beach on Phuket which has a thriving scene that, if it continues, will one day challenge Pattaya. Phuket has a huge number of international restaurants whereas a lot of the eateries on Samui are still Thai style places.

The infrastructure on Samui is still coming along and for many that it is one of the big appeals about the place. The island is seeing a lot of development at present and a lot of it seems to be at the mid to upper sector tourists – after all, these are the big spenders and are the ones that the TAT seems to want to attract the most. This is not to say that the bottom end of the market will disappear as the demand from this type of traveller is still very strong but it does demonstrate the changing face of Samui. Wherever you go on the island, you can 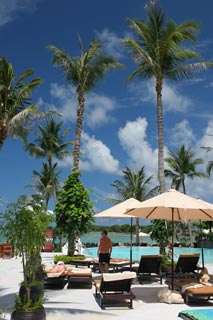 hear the sounds of band saws, and hammers & nails as groups of Thai builders hurry to put up the next establishment in time for the next high season. I don't know if you can still get a bungalow for 150 baht if you look really hard, well, you never know.

Pattaya used to be the place for sex and sand in Thailand and still retains the crown for the sex and sand capital of Thailand. Phuket started to go this way in the early '90s and now has a very well developed bar scene with sois and sois full of bars with girls for hire. For a long time Samui seemed largely exempt from the sex for sale scene. Sure, it did exist but it was never really anything like was available in other places. This has since changed and Samui now has a flourishing bargirl scene. Thai girls flock in from the poorer parts of Thailand to meet the wealthy Western men and now that Samui's identity is slowly changing from a backpacker hangout to another Asian beach paradise, so to do the wealthier tourists arrive. There is an ever increasing demand for girls on the island and the girls are going to Ko Samui in ever greater numbers. Chaweng Beach even has a couple of gogo bars.

Nearby Samui is Ko Phangnan and not far from Ko Phangnan is Ko Tao. Ko Phangnan is where a lot of the backpackers end up these days, a smaller island that is a short boat ride north of Samui. There is nothing on this page at this stage as I have never been there. It happens to be the home of the Full Moon Party when everyone parties all night and gets silly on dope and all sorts of other illicit and dangerous substances – not really my idea of fun but many seem to have a real blast there. Ko Tao is said to be one of the best places in Thailand for diving, although again, I have never been there.

Nice beaches. Has a nice atmosphere, not too quiet but not too developed. Still affordable – but for how much longer?

Getting there from Bangkok is a little pricey. Too many backpackers arguing over who has paid the least for this or that.

A nice alternative to Phuket. It is not as developed as Phuket, which may or may not be to your taste.