Ko Chang, which means Elephant Island in Thai, is the second largest island in Thailand and is located on the Eastern Seaboard, most of the way towards the Cambodian border. The island is part of a national park, but unlike Ko Samet, you do NOT have to pay a fee to enter the island. The fee on Ko Chang applies only to some of the inland areas and to the area with the main waterfall. 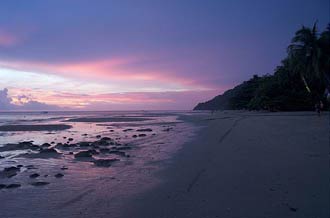 Comparisons with Ko Samet are inevitable. Ko Chang is similarly priced in terms of accommodation and restaurants. The infrastructure in Ko Chang is also similar with electricity being a problem at times and not all bungalows offering electricity running for 24 hours. If travelling by the most common form or bus, boat and then songtaew, the beaches at Ko Chang take about seven hours to get to from Bangkok, whereas the beaches on Ko Samet can be reached in four. To get to Ko Chang from Bangkok, you need to take a bus (around 170 baht) from the Eastern (Ekamai) bus station to Trat and this takes around 5 hours. From Trat, you take a songtaew (30 baht) to the coast and from the coast, a boat (50 baht) over to the island. Once you have landed on the island, songtaews (30 – 70 baht) are waiting to take you to the beaches, the bulk of which are on the west coast. So, the total cost to get to one of the beaches in Ko Chang is around 300 baht. Note: The bus from Bangkok to Trat may drop you off on the main highway, before you reach Trat at a location from which you can get a songtaew straight to the coast, thus saving you a little time.

There are several beaches on Ko Chang, most on the western side of the island. They are all ok, but in my opinion, none of the are as nice as the best beaches on Samet, Samui or Phuket. That's not to say that they are not nice, more that the beaches elsewhere are really good. But, the beaches do have other things going for them.

Due to its relatively isolated location, in so much that it really isn't that close to other popular tourist spots, Ko Chang does not suffer from the boatloads of day trippers that Ko Samet suffers from. It also seems free of jet skis and parasailing though you can hire a kayak if you wish and boat trips are always available. Like every beach spot in Thailand, you get the beach vendors trying to sell you stuff but unlike Pattaya where they will sell you just about anything, in Ko Chang, they are not pushy and only seem to sell things relevant to your beach holiday like food and sarongs.

For me, where Ko Chang lets itself down is that it is overpriced for what you get. The principles of demand and supply have pushed prices up to what I believe are unrealistic levels. I'm more than happy to rough it and stay in rustic, sometimes even rudimentary locations, I expect the price to be commensurate with the what you get. In Ko Chang, I feel that this is not the case. You pay a lot of money and get VERY basic accommodation. This has been an unfortunate trend at all of the Thai beaches and islands since late '97, except for Pattaya, where prices have really only moved in line with inflation.

For those who want to meet one of Thailand's maidens to help them enjoy their stay that little bit more, Ko Chang is not the best place. There is a complex of beer bars on White Sands beach with about 20 or so bars which are very much in the Pattaya style. Ko Chang did not use to be on the sex tourist trail but as it has become more developed and as more and more holidaymakers spend more time there, so has the demand for beer bars increased – and been satisfied by local entrepreneurs! Many of the sex tourists taking it easy on Ko Chang picked up their temporary lovely in Pattaya and brought along for the ride. For the foreign girls, there are a lot of Thai guys who hang about on Ko Chang waiting to pick you up.

I have heard that Ko Chang gets quite a bit of rain with just about everyone that I know who visited there telling me that I needed to pack an umbrella. Well, the time that I was there was no exception and it did rain a little every day – and this was NOT in the wet season. Still, the showers only lasted a little while and were soon replaced by the sun.

The internet is available on Ko Chang but when I was last there in March 2001, and it was VERY expensive at 6 baht a minute. (It must have come down in price a lot since then, surely!) A lot of basic items are also a lot more expensive on Ko Chang than the mainland as they have to be shipped over. Ice creams are about 25 – 50% dearer on the island than the mainland as are canned drinks. Toiletries are perhaps 20% more. Very little of what you would typically buy on a beach holiday is actually made on the island other than the bottled water. For some strange reason, beer is cheaper on the island than on the mainland with Heineken available in the restaurants for 40 – 50 baht for a small bottle. There are few places on the mainland where you can get it at this sort of price!

Quite a few foreigners seem to fall in love with Ko Chang and stay on indefinitely, picking up a job in one of the beach side restaurants or perhaps doing something a little different such as running a dive shop. I can't quite work out how they manage to keep the job as a Thai would do the equivalent job for around 4,000 baht – and that's working 6 days a week. The restaurant / bungalow owner is not going to pay them a Western wage! Still, they seemed happy so it all must be working out ok.

Ko Chang would be a good place to go when you really want to get away from it. It really is a lot quieter than all of the other beaches and islands listed on this site and at night, you do feel like you are on an island, away from civilization. It is a good place for a quiet scene. If you want a bit of action and razzmatazz, then this is most definitely not the place to go.

Quiet, with only a limited number of visitors. All beaches are still relatively quiet. Its location away from other popular spots means no tour groups come over for day trips. Doesn't suffer from jet skis and other noise pollution.

Accommodation is not that flash and is downright expensive for what you get. It's a long way from Bangkok, and most of the other "popular" places in Thailand. There are a lot of mosquitoes, some apparently malarial. The beaches are nice, but not fantastic, especially compared to some of the other beaches in Thailand.

Often described as an unspoiled Thai beach, what they fail to tell you is that it lacks a lot of basic infrastructure. I strongly believe that Ko Chang is a bit of a love it or hate it type of place – you really need to know what you want from a beach holiday and think about whether Ko Chang fits.