Just two hours by bus from Bangkok, Kanchanaburi is another of the provinces close to the capital that receives a lot of tourists. There are quite a few things to see and do though apart from the Erawan waterfalls, none of them are that impressive on their own. With all of these attractions combined together however, Kanchanaburi makes a nice break away from Bangkok for a day or two.

The Erawan waterfalls are a series of seven tiered waterfalls set about an hour and a half by bus away from the main town. The waterfalls are all in a national park which means that foreigners get ripped off to the tune of 200 baht while the locals only pay 20 baht. This park has the usual collection of park rangers on duty whose job it is to stop the Thais from littering within the park. Yep, I say the Thais as foreigners do not really have the culture of littering in quite the same way that Thais do.

From the main park entrance, the walk from the start to the top waterfall takes about an hour or more and towards the last couple of waterfalls, the track is actually pretty bad and for older trekkers, there are some points that may prove impassable. At the time of year when I was there, there were parts were you actually had to wade through water ankle deep – though I am not sure if it is like this all year round. Still, most of it is fairly easy. It must be said that the further along the track you walk, the more impressive the waterfalls get and there are many opportunities to take some nice photos. Buses go to and from the national park once an hour or so.

There is a nice river running through the city and you can go for a ride on these sort of Thai style speed boats that is a bit of a thrill for a few minutes though fairly expensive. When I was last there, we paid about 200 baht for what can't have been more than a few minute dash down the river. Fun but overpriced.

Kanchanaburi is one of the hottest provinces in Thailand and if you are there during the hot season, with many of the attractions being outdoor type things, it may become unbearably hot. Personally, I don't think I would like to visit during the hot part of the year.

There are several museums, including a war museum. They are worth a nosy if you like that sort of thing and there are some interesting bits and pieces in the war museum. There are the usual collection of Thai temples and they are always worth a nosy though there is nothing as impressive there as the temples along the river in Bangkok. A friend 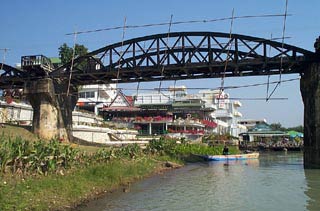 tells me that there are some caves somewhere but I have never been to them so cannot comment. He seemed to think that they were well worthwhile.

The Death Railway is what most people who visit Kanchanaburi see. Historical significance aside, it's just a small bridge. It's amusing to watch all of the Japanese going oooh and aaah at the site of where their forefathers mistreated huge numbers.

In the immediate area of the bridge, Thai vendors fight for the chance to sell the usual Thai food, snacks, cans of Coke etc at tourist prices. Still, this sort of thing happens all over the world so I shouldn't really complain. I don't know exactly what it is but there is something that I find awfully tacky about this particular attraction. You can get for a short ride on the train from the bridge to the main station that lasts all of a few minutes and cannot possibly cost more than a few baht.

The next most over-rated tourist attraction is the cemetery of the dead allied soldiers who died building the bridge. I guess it is fascinating to see how many of your fellow countrymen the evil and sinister Japanese killed and pay our respects, but other than that, visiting a graveyard has never been my idea of fun. There is also a cemetery of some Chinese settlers in Kanchanaburi although the historical significance of that one escapes me.

There is a shopping centre in Kanchanaburi Called "Kan" though you would be best advised to save your shopping for Bangkok. In the area immediately surrounding the shopping area are a number of street vendors serving the usual mix of tasty Thai style street food.

One thing that Kanchanaburi is very good for is accommodation with there being a number of cheap hotels and guesthouses to choose from. Some of them have nice locations set down by the river and they are very reasonably priced. Most of these guesthouses also rent out bicycles and although I have never done it as I prefer to get around by foot, I imagine exploring Kanchanaburi town by boat would be fun. There are also a few restaurants set down against the river.

A previous edition of the Lonely Planet guidebook mentions that the samlors in Kanchanaburi are a rip-off and never was a wiser word been said. Myself and a friend had an issue with a samlor driver where he tried to rip us off and in the end, he started pushing and shoving my friend and we had to get a policeman to sort out the problem, which he did, in our favour.

Close to Bangkok. Lots of attractions. Most things are affordable.

A nice place for a short break away from Bangkok that has a little bit of everything, history, nature and culture. It's a fairly nice sort of a town.