Hua Hin, approximately 200 km southeast of Bangkok, has been a popular weekend getaway for Bangkok Thais for decades and has gained popularity with foreigners over the past 15 or so years. Over this time it has developed with more big hotels, more restaurants and more things to do and today it is a very real beach holiday alternative to Thailand's more popular beach resorts of Phuket, Ko Samui and Pattaya.

Hua Hin is home to Wang Glai-gang-won, the beautifully named palace (it means the palace a long way from worry or 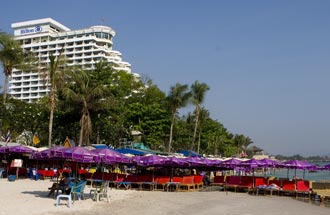 anxiety) where HM The King used to reside. Almost everyone reaches the pleasant seaside town by road, be it private car, minivan, taxi or bus. You could take the train but it is slow, and it is hardly worth flying there as you can get there by road in less than 2.5 hours from Bangkok.

In the downtown area there are a couple of 5 star hotels, namely the Hilton, the large hotel set beside the beach, right in the best location, as well as the beautiful Sofitel Resort, a lovely low rise hotel complex that attempts to preserve some of the old Thai traditions. There are many 4- and 5-star venues a little outside the main downtown area. It would be handy to have a car to drive between them and downtown. While local transport options exist, having the use of your own vehicle would be much more preferable. Hotel shuttle buses operate between resorts and the downtown area but can be rather pricey.

There are a number of mid range hotels in downtown Hua Hin which in this particular beach area means 1,000 – 2,000 baht a night. Prices vary greatly between the different Thai beaches and islands! For this you get the usual air-con room with hot water shower, cable TV and a fridge. The newer the hotel and the closer it is to the beach, the more you will pay.

While Hua Hin might not be on the backpacker trail, there are a number of guesthouses, some of which are set by the bay – some are even on wharves right over the water. There are also inexpensive accommodation options in the heart of the nightlife area, or back up on Phetkasem Road, that is the main road that runs through Hua Hin which is perhaps 400 – 500 metres back from the beach – easily walkable.

Hua Hin is very popular at the weekend when middle and upper class Thais flock there. As such, the rates charged at hotels outside of the traditional December to April high season can be much higher on Friday and Saturday nights, as well as holiday weekends. You can get some very good deals in the low season on weeknights! Also, if you need to get back to Bangkok in a hurry, the roads going back to the capital can be quite suggested on Sundays as Thais and expats return.

The beach is very nice – long and the sand is white and soft. The words hua hin in Thai mean head of rocks and the beach has many, many rocks.

If you like horse riding, then Hua Hin is the beach for you. Small horses are ridden up and down the beach at Hua Hin by their handlers who try to sell you the romance of a beach horse ride. I really do not know how much it costs these 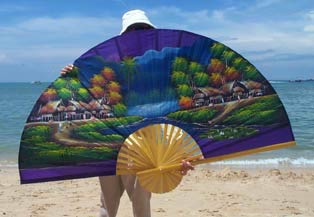 In addition to Thais who flock to Hua Hin at the weekend – who tend to stay at hotels and in large condo buildings outside of the main city centre – Hua Hin seems to be popular with Europeans. It's hardly the place for a party animal and the nightlife couldn't be described as bustling. Frankly, if you are young or at least young at heart, then you may want to consider somewhere else. Still, there are plenty of young people just chilling out in Hua Hin, including many Western couples.

I first visited Hua Hin in 1999 when Soi Bintabaht was only soi of naughty bars for Westerners. The nonsense was contained in this small soi and didn't spill over into areas. That has all changed now. There were perhaps 12 – 15 bars back then but goodness only knows how many there are now? More like 50 I should imagine. The bars are small, each with a handful of girls and in a way they feel a little out of place in Hua Hun. They should really be transplanted over to Pattaya.

With that said, the bars in Hua Hin is more pleasant than their equivalents in the other parts of Thailand. In Bangkok, Pattaya and Phuket, the girls are often hard and silly. In the bars of Hua Hin attitudes of the ladies are cheerful for the most part, and drinks prices remain reasonable. Prices are a fair bit lower than other areas. Still, let me re-iterate that even though there is an increasingly bigger bar area in Hua Hin, if such things interest you then you would likely have a better time in Pattaya or Phuket.

I hear that the Hilton Hotel has a disco but I have never been there myself. I'm not sure about other nightlife opportunities because whenever I go to Hua Hin, it's to relax, not to party. 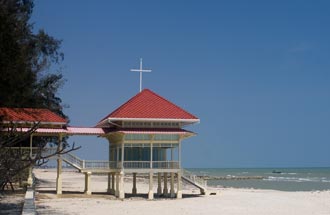 Mountain. On the mountain is a very nice Chinese style Buddhist temple which overrun with monkeys. They're mischievous but fun to watch as they fight each other for bananas and other treats that visitors can buy. It's worth visiting and well worth an hour or two of your time.

Another Hua Hin I never bore of is King Rama 6's Summer Palace, a very small part of which is pictured here, which is located about 15 km outside of the main city area, on the main road between Cha Am and Hua Hun. It's an unusual palace complex, and like Khao DaGiap is very much worth visiting. I've been a number of times and it's disappointing to se few Western tourists there. I think most people who go there would enjoy it. Entry is a paltry 30 baht – although getting there and back will cost you much more.

Eating out in Hua Hin is great! You can get fantastic inexpensive Thai food at the night market. The seafood restaurants that hang out over the bay are for my money the best in a major tourist town in Thailand – great food and fair value for money – not such an easy combination to find these days!

Downtown Hua Hin has many Western food restaurants and even the fast food outlets are represented. There are many Italian restaurants and you can find them next to each other. If you like Italian – and I do – then try Pizza Mia which is directly opposite the City Beach Resort on a road that leads down to the main beach entrance. It's been voted one of the best Italian eateries in Thailand and I love the place!

A lovely beach that stretches for mile and miles, Hua Hin has a very nice holiday atmosphere, and is a great place to relax. Not as over-touristed as Phuket, Pattaya or Samui.

The beach is rocky in parts and getting accommodation can be tricky at the weekend.

A very nice beach resort that is sufficiently close to Bangkok as to be easily reachable for a couple of days away.