The northern centre of Thailand, many Thais feel that any visit to Thailand should include a trip up to the northern capital – and time allowing, I agree.

Tourism is a huge part of the local economy and the city of Chiang Mai is set up very well for visitors. Accommodation is available in all price ranges, though there are not that many flash places in the centre of the city. If you are looking for lots of 5 star options, you won't have anything like the range of properties that are available to you in Bangkok. 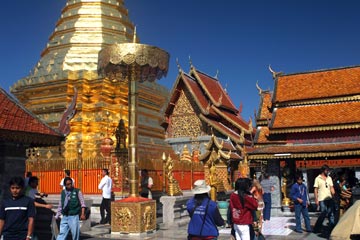 Chiang Mai seems to be home to a zillion guesthouses and a lot of mid-range places, but far fewer really top end places. And prices for a decent place to stay remain reasonable and are not nearly at the same lofty levels as what a room goes for in Bangkok. For less than 1,000 baht you can get a perfectly decent hotel in the city centre, and for half that you can get a perfectly adequate guesthouse, even less if you want to be cheap.

In Chiang Mai there is heaps to see and do. Chiang Mai is different to Bangkok in terms of what to do too. Most of the things to do are outside – temples to see, markets to visit, hills to climb, hill tribes to visit. This is not the place for large glitzy shopping malls but rather, a place to get in touch with the culture of the country.

The city itself is pleasant with a lot of temples and there are a couple of very impressive temples outside the city including Doi Suthep which to me is probably the most impressive temple complex I have ever visited. It is in my mind a MUST visit attraction if you make it up to Chiang Mai. It is up a hill overlooking the city of Chiang Mai and it takes about half an hour to get there from the city centre. The picture on the right here was taken at the temple on Doi Suthep.

Another of the popular trips is to Doi Inthanon, which is the highest point in Thailand. It too is worth a visit but bear in mind that it is quite a hike from Chiang Mai and it is a big trip to go there and come back, not quite a full day, but more than half a day. It's a pleasant spot and well worth venturing too also.

On my first visit to Chiang Mai, which was not until late 2004, 6 and a half long years after first moving to Thailand, I was amazed at the differences between it and Bangkok. First of 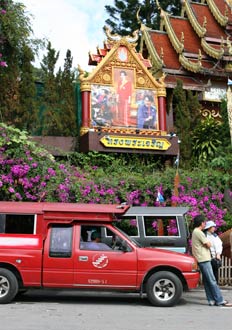 all, the weather is much more pleasant, it is cooler (though this depends on the time of year), has less pollution and at night it was genuinely cool. There was no air-con in our hotel room and not even the fan was used! Secondly, the food up in Chiang Mai is a little different to what is available in Bangkok. They have their own northern food which is a little different to food from other parts of the country. Apart from the khao soi, sort of crispy noodles in a mild curry, I did not really care for food from this part of the country, to be honest, though that is more a personal preference type of thing than anything else. The people in Chiang Mai are noticeably friendlier, more polite and generally a whole lo nicer than people from any other part of the country, or at least the places I have visited, which is most of it. People just seem more gentle, more polite, less harried and seem to have a genuine concern that visitors really do enjoy themselves.

The north of Thailand, of which Chiang Mai is the centre, has done a much better job preserving the culture of the country, and indeed the region, than any other parts of the country and Chiang Mai is THE place to go to celebrate the major Thai festivals like Songkran and Loy Kratong.

It is ironic that it took 7 years living in Thailand before I made it to Chiang Mai for the first time. It is something I want to fix and an extended stay up there is well in order! I have only spent two days up there and thus my report on that part of the country is relatively short.

Very well set up for tourism, affordable, pleasant people, pleasant environment and heaps to see and do! It is much more a cultural visit than is Bangkok.

I can't think of any but some might consider it a bit quiet compared to Bangkok.

Very much worth visiting!