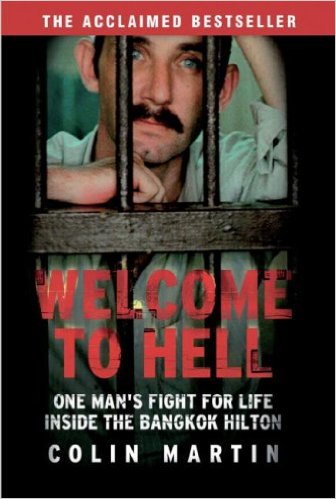 Colin Martin is an Irish national who spent several years in a Thai prison and this is his account of that time.

We learn a little about his upbringing and the scene is set well in the events leading up to his arrest. It is like watching an accident about to happen, wanting to do something to stop it, but being totally unable to.

The part of the book that deals with his arrest and what followed afterwards are quite awful and are enough to make you not just scared, but petrified of ever coming to the attention of the Thai police. What this guy went through then I truly cannot imagine. That sort of treatment should only ever be reserved for the most heinous crimes, when interrogation is being conducted under the most pressing conditions i.e. the suspect has planted a bomb and information needs to be extracted from them urgently in order to save lives.

Once in prison, all of the horrors we've heard about Thai prisons and more come to the fore and the author tells of how he saw first hand the sort of things that no-one should ever have to see. Harrowing doesn't even begin to describe some of it.

Truth be told, the story seemed to be as much about his struggle, the injustice of events and a flawed legal system, as it is about life inside a Thai prison. The author contends that he did not commit the crime that he was accused of, but we are never quite sure if that was the case or not.

I find it awfully surprising that Asia Books published this. Don't get me wrong, I'm glad that they did, but Asia Books as a retailer has been known to be conservative and rather choosey about what Thailand related titles it stocks. Anything that showed Thailand in a negative light, especially when prostitution was concerned did not appear on the shelves at Asia Books, in the past at least. In my opinion, this book paints Thailand in a very bad light, showing up major inadequacies in policing, the justice department, the prison system and suggesting that Thais are always on the take, amongst other things. With the hell that the author went through, you can understand him hitting out at all and sundry. But he paints some aspects of Thailand in such a bad light that if you read this book before visiting Thailand, you might choose to avoid the country altogether!

What I liked: The build up to his arrest takes about the first quarter of the book and is well paced. The author goes into quite a lot of detail of all that happened a long the way. I loved the author's brutal honesty and he told it like it is, slamming certain institutions and showing up what would appear to be some major flaws in the justice system. You could never help but feel the author was a "decent bloke", the sort of person most people would warm to.

What I didn’t like: The author described what happened to him fairly well, and the frustration after frustration he experienced with the Thai "justice" system. But I felt his descriptions of the places he went to and the people he met were lacking. We hardly got to know any of the people he met in prison, at least at an individual level. He often pointed the finger at those who were involved in all sorts of wrong doings, but seldom mentioned those who had done him a good turn, or who he had been at least somewhat close to.

Overall: This is only the second book that I have read to completion the same day I bought it, "The Damage Done" being the other one, funnily enough. Welcome To Hell is far from a literary masterpiece but it is absolutely compulsive reading.

Compare rates for the Aka Hotel Resort & Spa Hua Hin