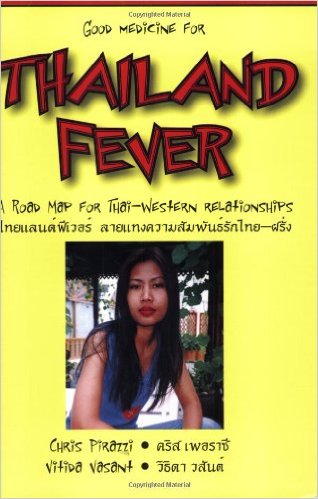 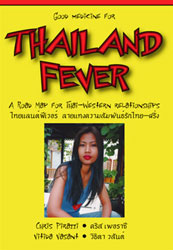 Written by an American man and a Thai woman, this book describes itself as a unique guide to Thai – Farang relationships, and indeed it is. Given the high numbers of Westerner / Thai couples, it is somewhat surprising that someone hasn't come out with such a title before now.

Thailand Fever has been very thoughtfully designed and the entire book is printed in both English and Thai. English text is found on one page and on the facing page the same thing has been translated into Thai meaning that it has been produced for both of you to read. Throughout the book, it is very clearly noted who wrote each section, be it the him or her.

All of the major problems that plague such relationships are covered, from cultural differences, to family, to money and even to the girl’s background, that is, if she was an employee of the naughty nightlife, or otherwise. I was very impressed with the advice given and it answers many of the age old questions that have frustrated those of us in such relationships.

One of the problems in so many Thai / Western relationships is that the Western guy has a much greater understanding of the woman’s culture and what makes her tick, than she does of ours. A generalisation of course, but the fact that a number of the Thai women involved in relationship with a Westerner come from a modest background, educationally speaking, they are not always aware of what is going on. Guys have the luxury of a zillion websites with info on the subject as well as other books which while somewhat different from this one, have touched on various aspects of Thai culture. With this in mind, I think a lot of the advice in the book will really open her eyes as well as hers. Whether either of you choose to act on the excellent advice in this book or not is obviously up to you, but I'd suggest that those who do will give themselves a much better chance of having a successful relationship.

What I liked: A very easy read and I read it cover to cover in a couple of hours. The writing style is light and frankly, fun. The authors have not tried to take themselves too seriously and the tone is light which I feel works really well in a book that is addressing such an issue. All of the important stuff has been very well covered.

What I didn’t like: It's a little on the short side given that each partner will effectively read half of it. While background is given on the various differences between Westerners and Thais, I thought that perhaps a bit more advice could have been given on how to work through some of the common problems. The problems are highlighted, but in many cases it is left up to the individual couples to resolve them themselves. I can see why they chose to do it like that, but I think in some instances, a few more tangible pieces of advice would not have gone amiss. Still, this is a very minor criticism and where advice is given it is sensible.

Overall: This book really is very highly recommended. If ever there was a book that unlocked so much of the mystery that each partner feels in a Thai – Farang relationship, then this is it. I would go as far to say that for anyone who has not lived in Thailand but is considering a long term relationship with a Thai woman, then this is a MUST READ. And even for people who are living in, or who have lived in Thailand, this is highly recommended indeed.