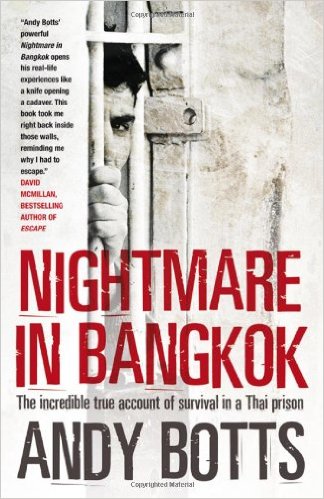 Andy Botts is a career criminal who ends up in a Bangkok prison after one of his scams trafficking heroin from Thailand to the United States goes wrong. Andy gives us a first hand account of his life as a scumbag and how for two decades he scammed, stole and then sold and trafficked drugs to fund an easy life as well as his drug habits.

Almost the entire first half of the book is set in Hawaii. It sets the background for the story with Botts' development from a young punk into a thief and finally a drug dealer.

While it might be titled “Nightmare in Bangkok”, the first half is about Botts’ life in the US and is rather self-indulgent with the career criminal seemingly excitedly regaling readers with his small-time scams.

When Bangkok becomes the focus it is clear that Botts learnt precious little about Thailand and his descriptions of the prison and the many years he spent there are incredibly vague.

The Bangkok prison genre has been done to death and I can't help but feel that this offering is a few years late. It reads more like a diary than an insight into what life was like inside a Bangkok gaol. For a book that describes itself as “a true account of survival in a Thai prison” it contains remarkably little grit or gore. There’s little in the way of character development and the whole book seems to have been written in record time and gives but a quick glance of Bott’s life. No single part of his life is covered in any detail which is all rather unsatisfying.

Unlike Howard Marks (author of the top selling "Mr. Nice") who was involved in running drugs around the world and wrote some incredibly interesting and engaging accounts of his time as a drug dealer and then behind bars, Andy Botts does not come across as anything of a nice guy – or even remotely articulate. His constant craving of an easy life will find even the most open-minded reader struggle to be endeared to him.

My advice is to stick to David Williamson’s “Escape” for an intelligent insight into life in a Bangkok prison or Warren Fellow’s “Damage Done” for the sheer shock value.