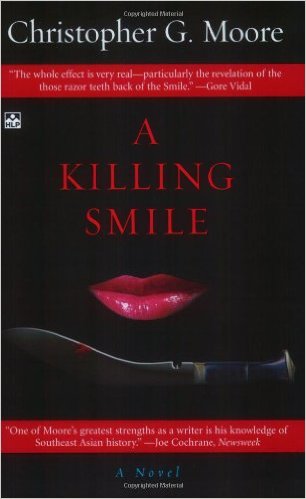 First published way back in 1988, this was the first modern era novel set right amongst Bangkok's naughty nightlife. Much of the book is set in the Thermae which is referred to as "HQ" and is unofficially Chris's second home. His first book set in Thailand & in many people's opinion, this is Moore's best work. It is important to remember that when this book was first published, there was NO Internet as far as 99.9% of the population was concerned, and this book was one of the few pieces of literature that people could read that provided some sort of information about Bangkok at night. Chris obviously learnt very fast, because I gather he had not been here that long when he wrote it. I gather this book is available in Japanese and German too.

What I liked: The story was familiar to all of us and totally believable. Like so many of the books written before the internet, the book was not only entertainment, it also educated us about the whole nightlife industry. I'll never forget some of the brilliant observations that Chris made, such as the upcountry girl who was new to Bangkok who would sit and squat on a conventional farang toilet – and how the owner would see the "paw prints" there the next morning.

What I didn't like: Parts of the book were a little drawn out, and it was in parts very slow. Some of the sentences, and indeed some the paragraphs, while descriptive, are very long, and in a way, reminded me of reading statutes back in my 210 Commercial Law class.

Overall: A timeless classic is how this book was described to me by one Bangkok expat, a devoted Moore fan. I really read to re-read it to see if I agree with those comments. This is one of the books that I read during my formative time in Bangkok's naughty nightlife, and even now, I still quote Chris on several aspects of it all, including the sickness as he refers to it, the way that people really lose the plot over the nightlife.