I was watching a new and eye-opening current day documentary on Netflix about an Israeli guy called Shimon Hayut aka the Tinder Swindler. Then, just about to switch off the PC when an indicator on the Stick Icon flashed. Clicking on it somewhat surprised, though only mildly, to see him online again. Welcome back! Following day, I decided to put together a few lines to celebrate the return of the column.

Sometimes labeled the good old times storyteller in commentaries, feedback or Stick himself, this is definitely not the time to dwell in the glorious old days on the dream beaches of Phuket or any other place in Thailand. It’s now 2022 and a new chapter begins. The Covid / Omicron pandemic is over! Is it really? Well, let’s hope so! 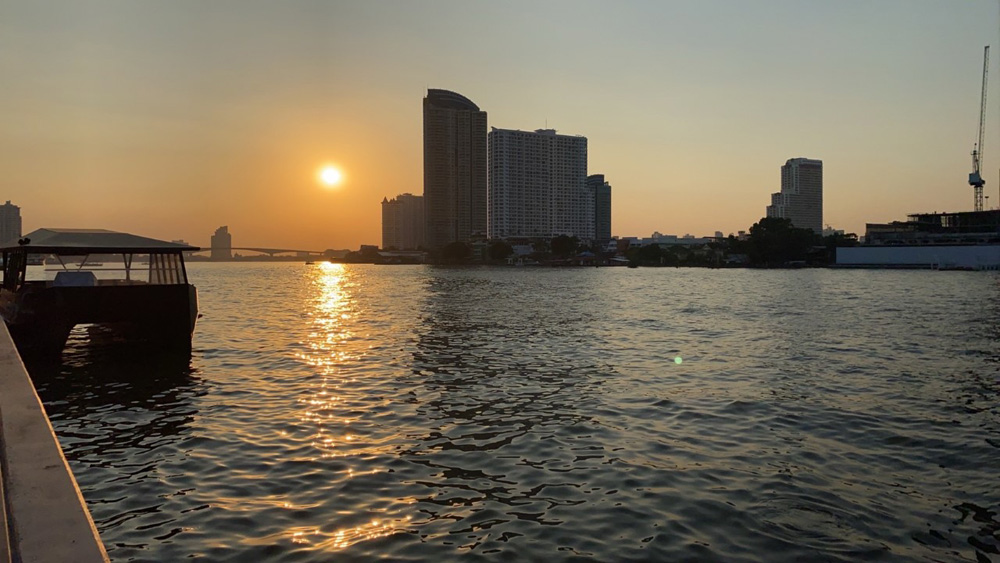 I came to settle in the Big Mango only 3 months before the beginning of the pandemic and no doubt plenty will be heard and written of the hardships, the sad days and tragic tales during these months. So, my narrative begins in November last year when the first quarantine-exempted travelers arrived. Not surprisingly the first visitors were mostly couples or individuals with local family ties eagerly awaiting to reunite with relatives. The Chatrium Riverside Hotel’s front garden by the river on Charoen Krung is an ideal place to meet with people. In good times its mostly full up with tourists or Thais on the large, generous terrasse. Not this day though in November, 2021. No hassle to get the best places right next to the Chao Phraya. Only a handful of other customers were around. The ambiance at first was only slightly subdued. The beauty of the site next to the water remains the same in good and not so good times. And so much to talk about, so many things to tell. Later more former friends and ex customers were to follow. Others would have liked to come but surprisingly many in my cercle of acquaintances refused vaccines and could not. 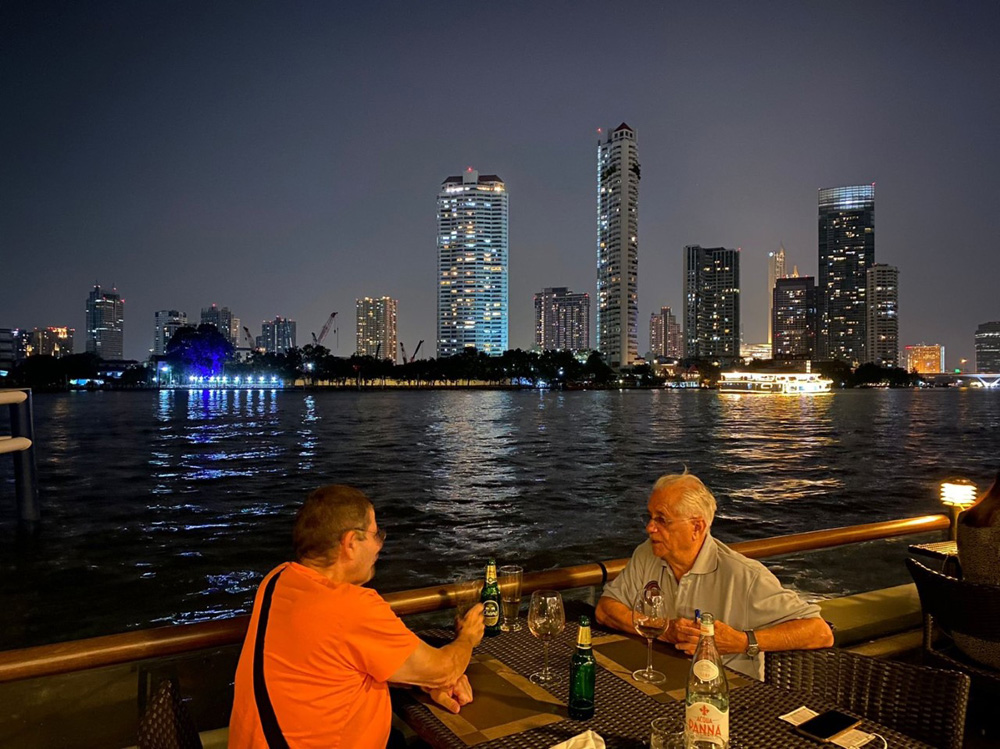 Then Christmas approached. We all have memories from the earliest days of our childhood remembering the holiday, the Christmas tree, the snow, the presents, the smell of the cookies and so much more. But no need to go that far back. It must have been about 7 or perhaps 8 years ago. Alain was a preteenager or perhaps already in his first teenage year. In any case he was still the lovable little daddy’s boy before his rebellious streak started to become more dominant. Without a mother and living in a land where Christmas is not officially celebrated, saying that it was a traditional Xmas week would be a stretch. But it got as close as possible as circumstances would allow. I remember decorating the tree. The two of us together. He insisted on putting on the electrical candlelight as soon as the decorations were up. After he’d gone to bed, I arranged his presents under the tree and rewarded myself with a Cognac for the hard labor! As had been tradition with my first family, he opened presents the next morning surprising me with a few offerings that he had scrambled together with his modest pocket money. Later we sat down to a much-improvised turkey dinner. Neither me nor the maid knew how to make stuffing, so we bought some ready-made and had a good giggle when the maid asked if she was to wrap it around the turkey or in the bird’s belly. Naturally, her being Thai it was her first Christmas and first turkey dinner in her 40 something years. In the end it all turned out well and the roast potatoes, Brussels-sprouts, cranberry sauce and more made for a tasty dinner that we all enjoyed. It was the last Christmas day Alain spent at home full day and the memories of watching DVDs of “Home Alone” and” Mister Bean” later in the afternoon and evening are sweet and unforgettable.

The Christmases that followed did not leave lasting impressions. But much happened over the coming years. Many pleasant and memorable outings to the surrounding Islands, regular journeys to Bangkok, weekends in Krabi and later in Phitsanulok where Alain frequented a boarding school. A two-week journey back to the home country. Meeting old friends and people and places not seen in many years. But also the departure of some of my best friends and my first wife. Another friend that I had idolized for his wisdom and the many precious counsels he gave in younger years had totally changed now growing a long ponytail to adorn his bald head, turning into a kind of Jesus freak. Distributing strange leaflets with even stranger messages. But that’s life and as if it was necessary was soon to be given another lesson of that often-cited mantra; there is no justice in life.

In May 2019 my beloved son Alain died in a tragic Motorcycle accident. 6 months later I sold my home in Trang and relocated to Bangkok. That happed over the last two weeks of that same year and kept me busy. Christmas and New Year became almost a non-event. Weeks later in March 2020 the pandemic hit. Traveling became difficult for periods and then impossible, being prohibited. More important to me was the closure of public establishments and restaurants and the resulting impossibility to become more acquainted to my new environment. Making new friends became beyond the bounds of possibility to a large extent. My existing friends lived mostly in Phuket, Pattaya and Trang. I did travel to Pattaya several times during this period for two or three days to meet with a good friend. Bookings made to travel to Hua Hin and Ayutthaya both had to be cancelled because of Covid-related curfews. Christmas that year 2020 was spent mostly alone in a kind of solitary confinement in my condo. It was a rather sad and morose ending to the year.

In November 2021 travel restrictions began to ease, and I was able to meet again with a several groups of friends and former clients. Then the Omicron variant hit, and restrictive measures were partly reimposed. The pandemic was not over and the outlook gloomy. I did not want to spend another lonely Xmas & New Year again like last year. What to do? 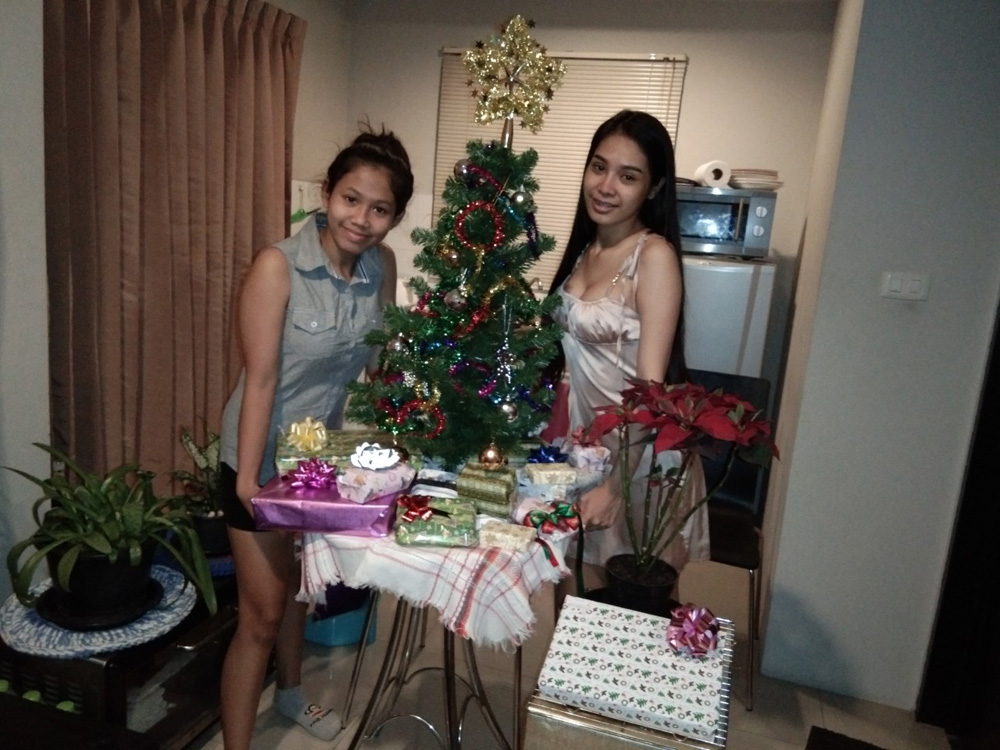 I decided to produce my own Xmas show. But the only talents for the kind of stage I envisioned were cooking as I’m a bit of a hobby cook. I invited 2 appointed and obviously jobless bargirls for a modest party. Both were happy to oblige. I went shopping for some trinkets, chocolates, and some more glittery stuff to put under the tree. Christmas Eve they requested Fondue. That was easy and they actually liked it. Later they produced some freestyle dancing, and we all spent a pleasant and fairly animated evening. Asked later if they had any idea what Christmas celebration was all about; both in unison happily replied; sure, eat, drink, open presents, have fun. Bless them!

Time came to celebrate the arrival of 2022. I did not attempt another turkey dinner but ventured to what seems probably to many readers much more complicated. A fillet-beef Wellington! More precisely a sort of mini filet and somewhat denatured. Most Thai people are not overly keen on beef and the ideal alternative would have been veal filet but that’s not available here. So, I settled for pork. The result was positive, even spectacular by the girls’ reckoning. Smartphones came out to take pictures and immortalize something that they had never seen or eaten before to show family and friends. I am quite proud of it myself as it turned out well and was very tasty. The girls even gave it the attribute excellent and top notch!

January for many of us living here with no permanent resident status is the yearly visa time. For me it comes at the end of January. Another subject nobody wants me to dwell on. But it has to be done. So, like many of us I do it. In my case for several years now, I’ve had an agent handling it for me. The long waiting and the uncertainty having all documents ready & in order is not prone to my vintage any longer!

The author can be contacted at : ILDEDEKLOTH@hotmail.com

Covid Killing The Thailand We Knew