Pornphan cringed when we entered the house through the side door by the kitchen. Not that it was dirty but the room was definitely in some disarray. I live in a two-man household – my 18-year-old son and me. To say that I’m an orderly, organized, neat and tidy person is not overstating things. My son on the other hand is a very clean person. Meaning in his body. Several showers a day is the norm. The neat and tidy moniker however cannot be attributed to him. Just one more thing I apparently omitted to teach him in his younger years!

The maid (Pornphan) had been absent for a long time. After a cursory walk through the house it quickly became apparent that lots of cleaning work lay ahead. And that’s not to mention the garden that needed much attention, especially in this hot and dry season. She settled at the far end of the sitting room, near the sofa, unpacked and it wasn’t long before she equipped herself with cleaning utensils and got to work. 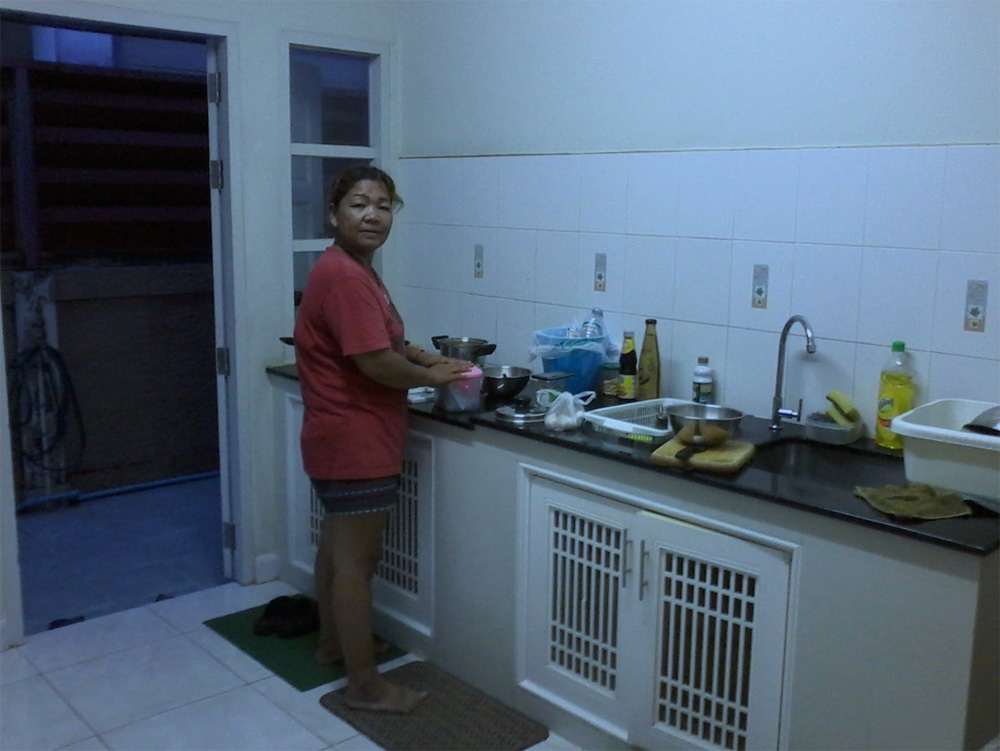 I first employed Pornphan 10 years ago in early 2008 when she came to help me settle in and furnish the new house here in Trang. In no time she made herself indispensable. Tending to the needs of the then 8-year-old boy, taking him to school on the motorbike, breakfast, shopping, cooking, cleaning, washing, ironing, assembling furniture, tending to the garden and more. That all lasted for many weeks.

Then came the time she wanted to return home to her own family. See her own kids again, being currently looked after by her mum. She lives in a small village somewhere between Surat-Thani and Thap-Put not easily accessible (bus, Rot-Tu, Song-Taeo). She’d be back next week, she said.

But time is an abstract notion in Thailand. Next week or tomorrow means mostly sometime in the future. Next week turned out to be 3 months in this case but we welcomed her with open arms, glad to have her back again and her precious help. This scenario repeated itself several times over the following 2 years. Then, in mid-2012 I was run over on my early morning bike ride and suffered a severely fractured leg and shoulder. This time it took her less than a day to join me at the hospital bed after she had been informed of my misfortune. She stayed at my bedside for two weeks and later at home pushing my wheelchair for another month. Another 2 years later she was again at my hospital bedside when all the titanium prostheses were extracted from the leg. Needless to say the house was kept spotless during my absence from home and the many weeks I was immobile.

The “I’ll be back next week” continued for many more years. Even in good times it is fair to say at this point that a Thai maeban (housemaid) does not count working hours or even days. The abstract time notion here is in the expats favor, as he is mostly used to hourly wages paid for this sort of service back home. Once maebaan feels integrated into the community she will happily double as gardener, car wash and most importantly to me as an excellent cook. Give me a choice between Baan Rim Pa in Phuket or one of the renowned Thai eateries in Bangkok and her I will always choose Pornphan. Myself a fairly decent hobby cook of European dishes, I have never ventured into Thai cuisine. Her culinary excellence therefore is doubly appreciated.

Two years ago my son – now well into his teens – an unpleasant incident occurred. To cut a long story short I lost my temper and shouted at him, he shouted back, various thing were thrown and broken. The maid stood by not interfering, of course. But only a few days later she asked to go home. As always I took her to the bus station. This time the customary “see you next week” came from me. Pornphan acquiesced in typical Thai fashion (never say no) waving shyly from the bus window on departure.

For close to 2 years I did not see her. Then late last month a short message on LINE from a Thai acquaintance “Pornphan come Trang, she stay house me, you want she come clean house!” Of course, I replied, happy to see her back. Her own children now grow up, one of them married, the other on a decent job she started to feel redundant and the days endless with little to do. It didn’t take her long to settle in her small corner of our dining room.

To be sure from the beginning she was offered a spare room with a comfortable bed. But that was not attractive to her. Like most Thais she can fall asleep in no time at all and almost anywhere. Thus the fairly narrow settee in the far corner of the sitting room became her domain right from the beginning. No doubt the large flat screen TV where she can watch the beloved soaps once Alain & me have retired to our own rooms or are absent from the home must have contributed to her choice.

Songkran is coming up. Like all, or most Thais, she wants to go home to her now larger family. That’s her mother (father has died years ago), her adult children, grandparents, aunts and aunties, neighbors and more. However it’s my son’s birthday on the 12th and I asked her to stay one more day for the occasion. We, that’s me and Alain’s invitees on this day are happy and eager to taste her culinary delight of the day. Yes of course, big smile. She’ll be happy to oblige. Then on the morning of the first Songkran day I will take her to the bus and await her customary “see you next week” before she boards the bus!

For Newcomers; if you’ve read the above submission attentively you can extract a few valuable lessons.

You were taught long ago in Farangland that time is money. In Thailand, forget it. The notion of time or being in time is just piss and wind. In emergencies or situations of distress you can count on your Thai friends. Choose them carefully. In my 30 years of Thailand I have to admit there are only few and far between, to be counted on one hand. Finally never lose your temper when in presence of Thais (if you can help it!)

And an afterthought to Stick: I hadn’t opened the site for weeks and was surprised to see Stick’s weekly column when I did yesterday. Pity though that you gave away the April fools condom story so easily. Sure many newcomers would have believed it!  With no more weekly news, few readers’ submissions the site has lost much of its incentive. To revive it Stick needs to be active more again, perhaps once or twice a month or so and more subs sent in by the new generation of expats. So here is my signing off with a word from Sylvester Stallone character in one of the old Rocky movies: If You can do it, I can do it, and then everybody can do it!

Nice story on your maid!

As for reviving the site, as I have said more times than I care to, I will now just write the odd article and will publish any readers’ stories that comes in.  This site is no longer a big part of my life.

The author cannot be contacted.