Translates roughly friends come first. A popular song in France around the late 1960s by poet and singer Georges Brassens. One of my generation’s idol. As for me, not a young man any longer, I’ve always loved girls all my life and still do. But I join Georges the poet in this assertion. There are many a times when friendship takes priority over female company. It’s what happened on this day and it made for a memorable evening.

But first with Stick taking his leave (or not), and I well into my retirement years, here’s penning my last submission. A suitable time I think to relate my very first day in Thailand in 1988. Arriving on a chartered flight from Paris at the still quietly peaceful airport in Phuket, I stayed in the cheapest lodging available in town, the On-On hotel (later to be used in the opening scenes of the film “The Beach”). Going for a drink in a nearby venue of somewhat dubious reputation (I found out later), the pretty waitress approached serving my beer then opened her hand. In her palm was clearly written the figure 200 in pink pencil. My confusion lasted only moments until I noticed that beaming and inviting smile on her face. Any doubts that I had just landed in the land of milk and honey vanished in to thin air and within less than 24 hours after my arrival. And best, no negotiating was called for, not at that price. Those were the days!

The Landmark Hotel in Bangkok has always been one of my favorites. The main reason is probably that it first opened around the same time I came to settle in Thailand. At the time in Bangkok I used to stay at a cheap place called Golden Gate on Soi 2, roughly at the location where the JW Marriott stands today. The easiest access from Nana Plaza where I often spent my later evenings on Soi 4, was through the alley by the Rajah Hotel.

For more than 10 years I used to walk past the Landmark, envious of the people who could afford to stay there. Later when my own fortunes improved I used the hotel myself occasionally. To this day, while not always staying there, I still love to sit on the front terrace enjoying the good food and watch the girls pass by on their way to work at the nearby plaza.

These days outside in front of the hotel every evening on an improvised set-up table between 7 – 9 PM all the unsold bakery stuff of the day is offered at discount prices. The son of a baker, growing up in a bakery shop I’m familiar with all the delicious European-style fancy cakes on offer. On my last day in Bangkok, before returning to the south I’m always one of the first to be there to have the largest choice of delicacies, almond fingers, hazelnut twists, and fruit & custard tarts. Even the occasional ham, chicken or pork pie to be heated up in the microwave is always appreciated.

Alain, being his father’s son, quite naturally has similar tastes and always awaits eagerly my return from Bangkok to compose the day’s dinner menu, often inviting friends to indulge in the feast. More recently, now in his 18th year a bottle or can of beer is allowed to upgrade the feast. The times when I venture myself into baking homemade tarts and pies these days, the most precious compliment I can get is always “as good or nearly as good as Landmark!”

Earlier this year in April while choosing my assortment of cakes a voice from the back called out my name. Turning around I saw that it belonged to a healthy looking guy in his 50s. Bemused and bewildered for a moment I must have looked pretty stupid. It’s only when he opened his mouth speaking in his typical Bernese dialect that I was able to place him. What do you call the circumstance when you haven’t seen someone in 20 years and then meet him by pure chance in a town of 15 million inhabitants? Coincidence if traced far enough back becomes inevitable. An inscription on an old Hindu temple. A wise man’s words. We embraced and decided to walk up to soi 8 and share a drink and a bite at Monsoon restaurant. 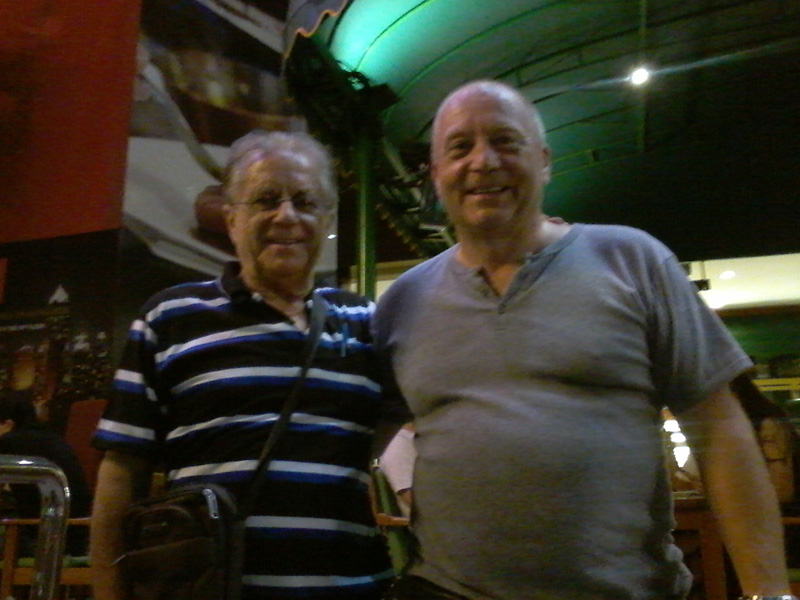 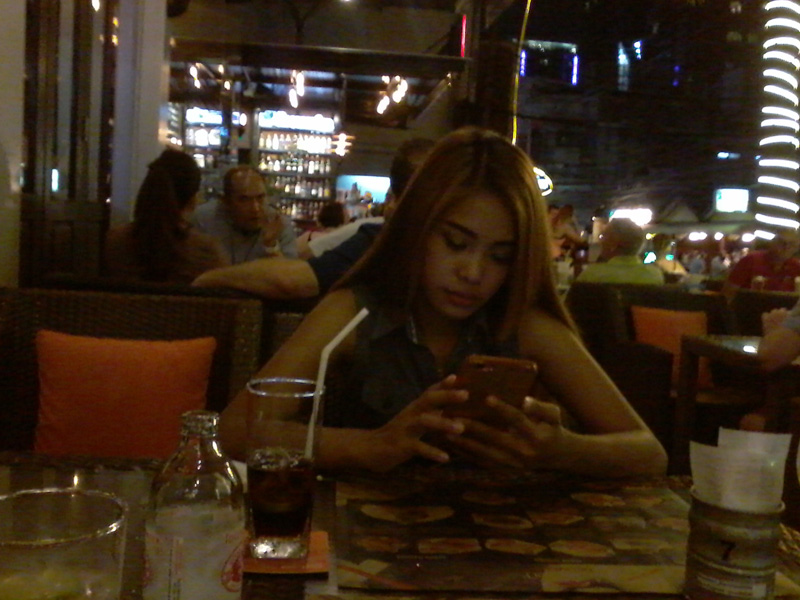 There are times when you curse the girls being buried non-stop in their cell phones especially when sitting around a table enjoying food. My companion that day did exactly that and for once it was pure blessing. It left Urs and me all the time we needed to catch up on 20 past years!

Dozens of stories to remember and tell but one stood out. Urs at the time was running a bar in Patong, Phuket. This incident dates back to around 1991 or 92. Occasionally during high season he helped out with excursions or day trips. One of our hit excursions then was a 2-day trip to Krabi with a boat ride of about an hour or a bit more to Hong Island. This particular small island, today overrun by tourists, was then our insider Geheimtipp. It was accessible only by high tide through a small opening in the rock formation. Once inside it evoked the feeling of another world. These days when reminiscing about it, scenes from the Avatar movie made years later come to mind. Natural beauty at its purest. Often our boat for up to 8 people was the only one of the day. We brought lunch and drinks in ice boxes and people enjoyed swimming, snorkeling and relaxing on the sand.

Due to the lowering tide, time was limited. That day we needed to leave not later than 4:00 PM. That’s when we realized that one man was missing. He had gone rock climbing and proudly waved to us from a lookout point high up. Trouble was he didn’t know how to get down. One of the two boatmen climbed up to help. That took time and when they finally came down a violent thunderstorm came up on the horizon and the tide had withdrawn far enough to make it impossible for the boat the leave. I tried as gently as possible to prepare the guests for a possible 10 – 12 hour wait before we could leave the island. Little shelter was available and food & drink had been prepared for a day’s excursion only.

From playful exuberance, the mood turned to gloominess. Urs at that point was a big help telling jokes in his inimitable Bernese German. My heavy first-generation Nokia cellphone was of no use, no signal available naturally. Apart from one elderly lady who feared for her life, people remained reasonably calm sheltering on the few potential points. It was past midnight when we spotted a faint light rocking lightly from left to right. It came closer. No doubt it was a boat. It got closer and stopped. With my emergency torch I could make out the name on the hull. PhraNang Inn. The hotel we stayed for the night. Wisely I had informed them where our day excursion would take us before leaving. We all waddled through the swamp to where the water was high enough to climb up the boat’s stepladder and launch back to the mainland. Our troubles however were not quite over as due to low tide we had to moor far off the hotel’s pier. A 45-minute walk awaited us to reach the hotel and the comfort of our beds.

Further reminiscing took us on a bus journey on our way back from Bangkok to Phuket. Unlike Thai people who seem to be able to sleep any place any time, to me sleeping on buses or planes often proves elusive. On a pee & food supply stop I think it was in Surat Thani off we went to the restrooms and Urs handed me what he called some minor tranquilizers to help me sleep. I washed it down with a can of beer. Next thing I knew I was being woken up in Phuket several hours later. Apparently I just collapsed while urinating and was helped back in the bus by two fellow travelers. I’d learned my lesson then with no serious harm done. Others were not so lucky.

An agitated woman called the office one morning some weeks later saying her husband had disappeared. He’d just gone out for a beer early evening and was going to be back in an hour she said. I called Urs who lived in Patong and he went looking for the guy primarily checking out Soi Bangla were the bulk of the action was then. But no luck. By late afternoon the lady was desperate and wanted to inform police. Eventually the guy turned up at the hotel still in a semi-comatose state. Less his wallet of course that contained his money, driver’s license and other documents but luckily not his passport wisely kept in the hotel safe.

There was no escaping the facts. The wife being present the guy came clean right there. A classic case of the “have a drink with me (spiked with barbiturics) and let’s go for a walk” saga. Some ugly explaining to the wife was to follow and Urs discretely took his leave. A tale I was to hear a few more times over the years to come.

Around the mid ’90s Urs started to feel uncomfortable in Phuket for several reasons.  It’s something that happens to many of us after the first few years in Thailand. Coming from a country where regulations, rules and laws are generally observed, officialdom efficient and courteous, he started to resent all those unpleasant and ugly extras one has to put up with here as farang. Payments to police to be left running his bar in a sort of pseudo peace as he called it. The uncertainty and forever changing visa situation, even the growing excesses of the Phuket tuk-tuk mafia.

The time came when he decided to sell out his profitable and well-placed bar and move his family, wife and two children back to the homeland.

Back home he had found a job as a caretaker of a large building, his wife taking the position of his assistant. We met once about a year into his new life in a motel on the AutoRoute outside Bern. He seemed happy enough. But the Thailand bug, again like so many of us, had not left him entirely. Reluctantly at first but more enthusiastically as our conversation intensified and another glass of wine loosened his tongue, he told me about his plans for the future. The piece of land he had purchased up northeast near his wife’s hometown and where he proudly showed the plans of the house to be built. The place he intended to enjoy his retirement to come and only a few years away now.

Thanks, Kloth, for all of your nice stories.  You have a very nice storytelling style and as I have said to you in emails before, I have always enjoyed your tales.  I particularly like stories like this where one talks about the relationships they have had and the people they have known over the years in Thailand.

The author can be contacted at : ILDEDEKLOTH@hotmail.com

Why Thailand Became A No-Brainer For Me…