Sunday morning is often internet reading time for me. It usually starts with Dawson’s political contributions or analsis and Crutchley’s humorous afterthoughts in the Bangkok Post. Later a few of my home countries newspapers in German or French. Some time in between I have my breakfast or rather a mid-morning brunch. The balance of the Sunday is then often somewhat of a void with nothing much to do these days. In earlier years when Alain was a kindly if at times somewhat cheeky kid I would have proposed a drive to the beach or one of the many sightseeing spots in the region. But he has turned 16 last year and the charming toddler of the past and the industrious schoolboy in the years that followed has turned into a bit of a rebel. These days he spends most of his free days (and often nights) on a PC, notebook or handy. I considered going for a bike ride on the less crowded roads on Sunday mornings or perhaps a swim in the town’s Olympic size swimming-pool. But a clouded sky and almost certain rainfall looming during the unusually rainy January this year ruled that out too. Telephoning my sister or one of my daughters in Europe was another option. But it was too early with the 6-hour time difference they would still be asleep. Put in an old Columbo movie on the DVD or watch porn on the internet. Neither was appealing. So I started to browse old pictures on my notebook and landed on a 17-year-old file with several hundred photos. I decided to write a short essay on those events that also began on a Sunday. An extraordinary Sunday.

The Wangtai Hotel in Surat-Thani was,and I believe still is, an unpretentious mid-sized hotel near the TaPi river at your left when arriving into town from Pang-Nga. Built some time ago it nevertheless had comfortable rooms. A large swimming-pool near the river and an adjoining sauna. Together with my sister and my then year-old son it was a place we sometimes spent a weekend. On that Sunday afternoon we were lying leisurely around the pool trying to relax after those busy weeks leading up to what in travel jargon is referred to as the “peak-season”. Then my cell rang. Ning, one of my office girls, was on the phone. She had been in the process of checking–in a group of people at a beachside hotel in Patong when an extraordinary large wave hit and swapped them all away. In a remarkably calm manner she continued to explain that a coworker had taken charge trying to relocate clients to another hotel and she herself was on the way to hospital suffering from a broken ankle.

Yes, it was the afternoon of 26 December, 2004. Ning implored me to stay away from Phuket or at least not come back before we had more news and information of what was happening. I called my neighbor in the Chalong – Rawai area where we lived. Unlike Ning, he was very agitated and when he first mentioned the word Tsunami all I could think of was a woman’s perfume or some sort of beauty product of that name. He said they were in the process of packing bags, food and living necessities then would move up to Promthep Hill to spend the night as another wave may yet hit our region situated close to the sea. (It never did). It took another 2 or 3 phone calls to make sure my neighbor had not taken leave of his senses. The real magnitude of the event only became known in the days that followed. 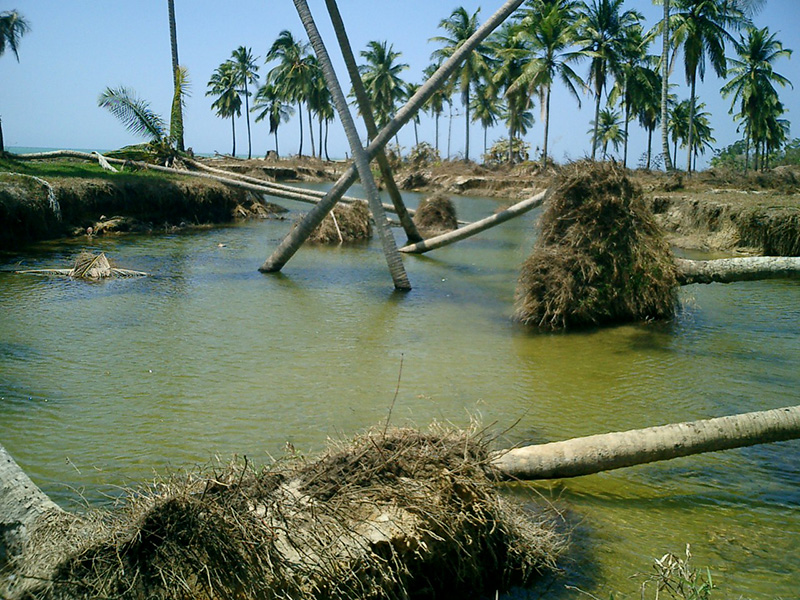 George had been a regular client for many years. I don’t know much about his professional situation but it was no doubt a comfortable leading position that allowed him to travel regularly at the most expensive period of the year over Xmas and New Year. Unlike other years when he was accompanied by his wife and a teenage son, this year he came with a young woman he introduced as his new fiancée. They spent a few days in Phuket then traveled on to Phee-Phee Island. On the fatal morning they went for a stroll on the beach and intrigued by the suddenly receding waters he wanted to walk out further. His friend went back to the room to have a late lie-in bed. It saved her life. Later we learned of another guest missing that day. He was staying at Similana Resort. At the top end of the Kao-Lak stretch not far of the town of Takua-Pa. It’s close to where the Tsunami memorial stands today. At the time a romantic boutique hotel bungalow style built on a rather steep slope and years before the fad on the Kao-Lak region started.

It took some days to adjust to the new situation after my return to Phuket. Then we underwent a search for the two missing men. Takuapa and Pang-Nga hospitals yielded no results but we put up notices and pictures anyway. The same in Krabi Hospital that seemed the most likely place we would find George had he survived. His accompanying fiancée had flown back home almost immediately after the event and I needed to inform the wife. I called from Krabi to inform her that unfortunately so far we had not found any trace of her ex-husband. Her response was curt and to the point, “He is still my husband”. I apologized for my blunder and assured her we would do all that was possible to find him, dead or alive. The fate of the other missing visitor at Similana Resort may well have been similar. He had gone for a stroll along the beach when the wave hit while his wife sat at reception at street level far above. Almost certainly he was swept away by the furious water elements in the same manner as George. None of the two were ever found. A sad ending but in the wake was followed by an impressive manifestation of solidarity toward the many casualties and also brought me lasting friends, some to this day.

One of them was Rolf. He would probably not under different circumstances have become a close acquaintance let alone a friend of mine. I had only met him once before about a year ago at some sort of gathering of Phuket farang. Don’t remember the exact occasion. Although a compatriot of mine and close in age in his late fifties, he had the typical look of a 1960s Hippie. Hair down to his shoulders and the unmistakable, down-turned horseshoe mustache. I remember recalling the old Scott McKenzie song “If you’re going to San Francisco” when I met him that time. Now again the meeting was much due to chance along Kamala Beach. His cheap, rented bungalow was mostly destroyed when the Tsunami hit. Somehow he had managed to climb on to what remained of the where he was rescued hours later by a Thai fisherman on his boat. When we met 2 days after the Tsunami we overlooked what was probably an initial and mutual dislike but immediately agreed that we had one important thing in common. We had both been lucky to survive the Tsunami. My own survival was totally uneventful and due simply to my absence from Phuket. His was more dramatic and even made a few headlines in a local newspaper. We decided it was time to pay back some of our good fortune to the suffering population of the region. I had the opportunities and the means to generate cash while Rolf came up with excellent ideas. Phuket’s beachfronts in Patong, Kamala, Surin etc., as well as the newly developed stretch along Kao-Lak got immediate attention and help from many local and international sources. We decided to concentrate our efforts to the then mostly undeveloped region further up the Phet Kasem Road closer to the small town of Takua Pa.

Surprisingly, not much more than a handful of people cancelled their upcoming Phuket holiday. I’d decided to inform all long-standing clients of the company by letter or e-mail. We made note of the most immediate needs for the victims. A Tsunami account was opened and we suggested everybody who could spare a few Euros to participate. Phuket and the Kao-Lak beach stretch of course got the most publicity on TV and other news outlets. The decision to concentrate our efforts on the small town of Takua-Pa and the nearby village of Ban Nam Khem turned out to be spot on. At the top end of Phet Kasem road and the location of the formerly tranquil beach of Thap Tawan. Not a developed tourist area yet but nevertheless hard hit. The response to my request had been overwhelming and immediate. Together with one of my staff and Rolf we travelled up weekly. At first distributing mobile shelters, rice cookers, blankets, food and many other immediate necessities. In a few of the hardest hit cases cash. 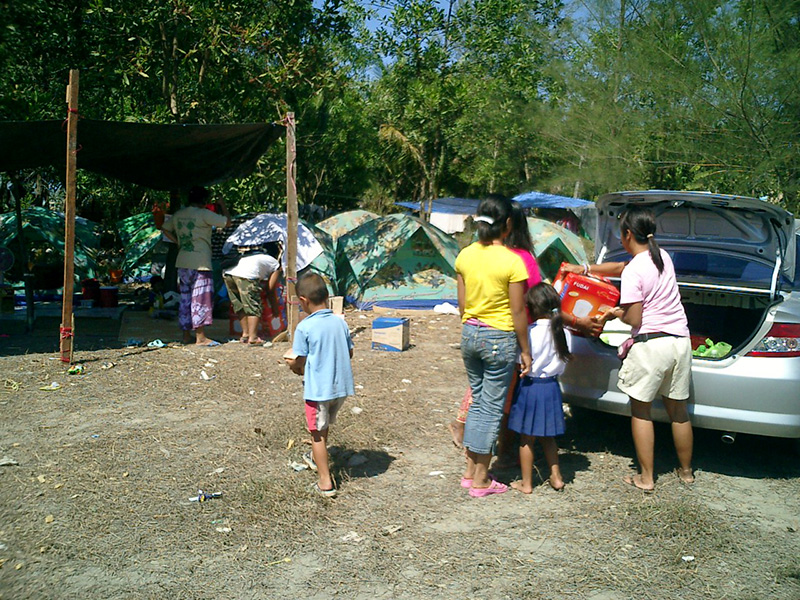 In a second phase we helped build, install and furnish the Taptawan nursery and finally during the rainy season we undertook opening bank accounts at the Takua-Pa K-bank in favor of the children in most need, some of them orphaned by the Tsunami.

Thai people are known for their ability to deal with adversity. Be it the often months long drought in northeastern regions destroying entire rice fields. Somehow the farmers always rise up again and survive the hardship often of course with the burden of heavy debts to the banks who had to bail them out. Same thing in Bangkok when large parts of the town was flooded in 2011 and once again thousands of people lost their livelihood. A similar determination was seen in the wake of the Tsunami. 6 months after the tragic event the rebuilding infrastructure was in full swing in Phuket and along the Andaman coast. Thais are the masters of improvising. When a former fishing boat proved too large to be taken of the site in the middle of the village they simply planted flowers around and turned it into a tourist attraction. 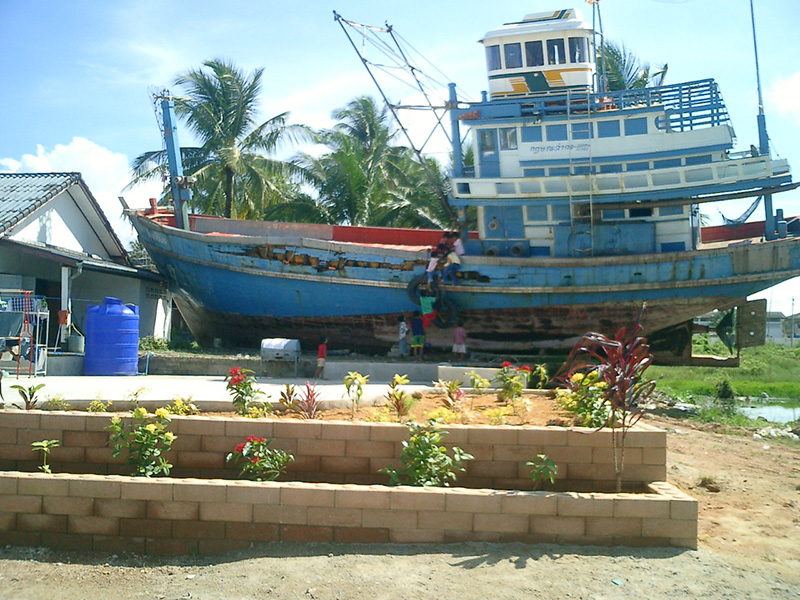 It had been an eventful year and when the first Tsunami anniversary approached a year later we invited all helpers and participants in the Tsunami effort for a 2 day outing in Phuket. Surprisingly some of the participants had never even come as far as Phuket before. Visiting the well-known spots of the island and followed by dinner and show at Phuket FantaSea.

As for the oversea sponsors, we kept meeting at January gatherings in or around Phuket for many years to come under the banner “l’amicale du Tsunami”. On several occasions trips to the formerly devastated regions were organized. A handful of them still keep in touch to this day, others send remembrance messages on the 24 December each year. 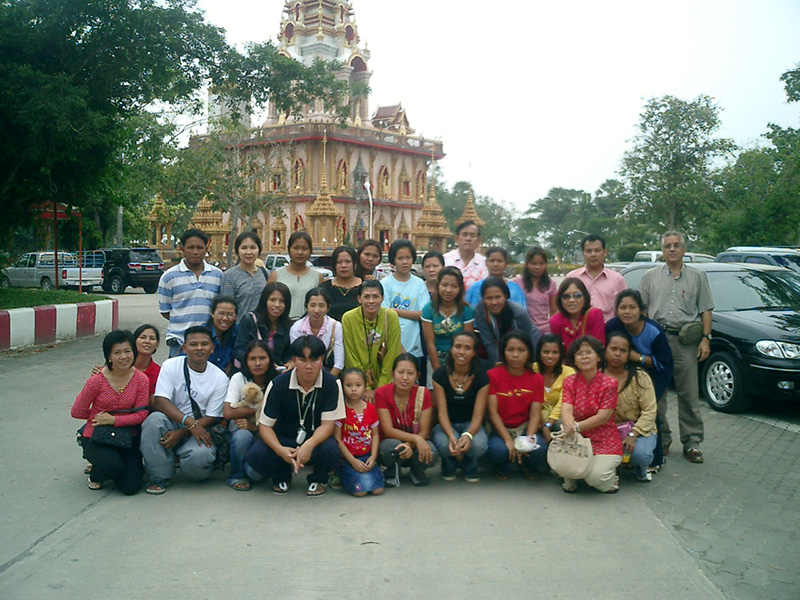 Calvino And Moore Are Better Than Ever!