As Time Goes By

Humphrey Bogart and Ingrid Bergman are long dead and Casablanca may not mean much to the younger readers of this blog. But it seems a fitting title to the much talked and written about changes supposedly taking place in the country. Some for the better, most for the worse or so I deduct by consensus of the majority of contributors. I recently (re)discovered or rather revisited a place that has not changed all that much over the years or more to the point has cleverly adapted to the changing times in more than a quarter of century. 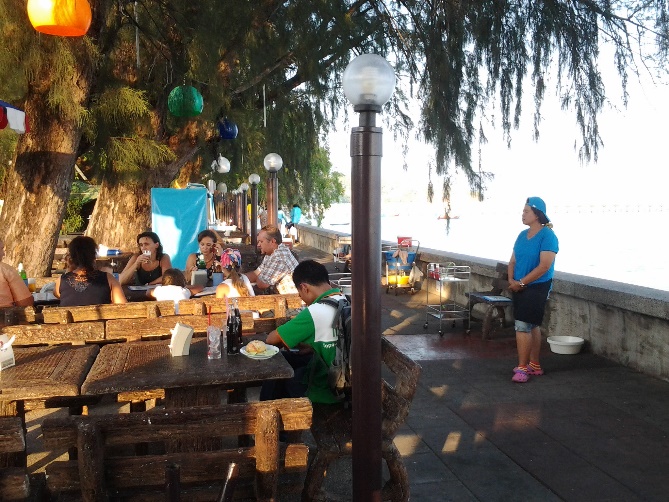 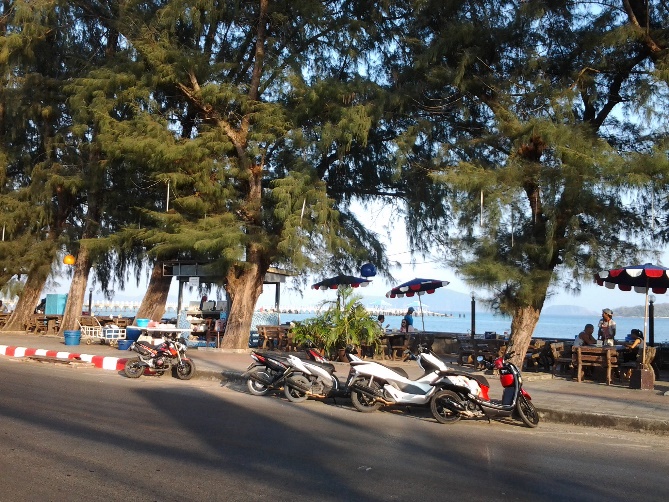 I arrived in Phuket in 1988 and settled a few months later in the southern part of the island in a house in Rawai situated halfway between the Shell museum (that was not yet built then) and the top of the gentle Rawai Hill where Tristan Jones built his house a year or so later. It was an easy 1-km drive by motorbike down to the beach shore. At the time it was a quiet, almost secluded stretch of beach front. For just over a year it was our daily meeting point for the small group of Swiss friends from the nearby Soi Swiss or Soi Titi Mokapun if you were Thai.

Early evening or nightfall would see us drink beer or in John’s case, Mekong diluted with his beloved M-150. We did not go to the beach itself, in fact Rawai Beach is not at all ideal for bathing or swimming. But on our way home from nearby Nai-Harn Beach, Salaloy restaurant was the place we met. A beautifully situated terrace restaurant on the seashore under Casuarina trees. Great and cheap food which was important then lured us there over and over again. Pad Thai, noodle soup was upgraded over the years to more elaborate dishes. Being served was always somewhat hazardous as the waitresses had to cross the busy beach road to get to the outside tables situated along the shore. Often, and to end up our evening, we would cross over and have a roti (southern Thai style pancake), plain with condensed milk / sugar or egg & bananas made tastily by the (then) young Muslim couple (they are still here now, great!). After I left Phuket in 2008 for the more remote and less tourist over-run town of Trang, I opted for a twice or so yearly drive back to meet with old friends & acquaintances. 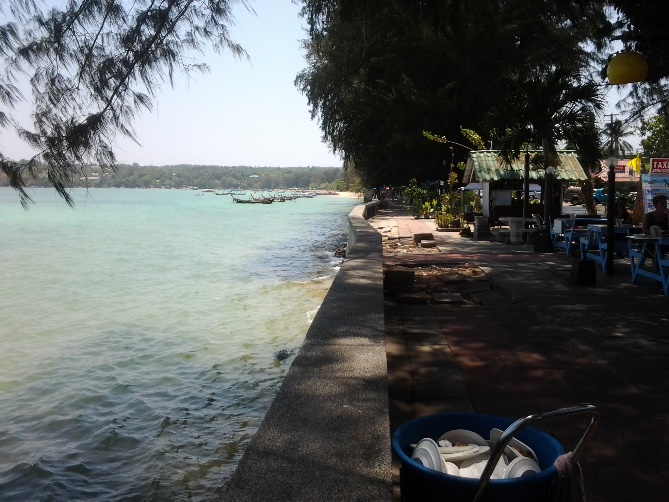 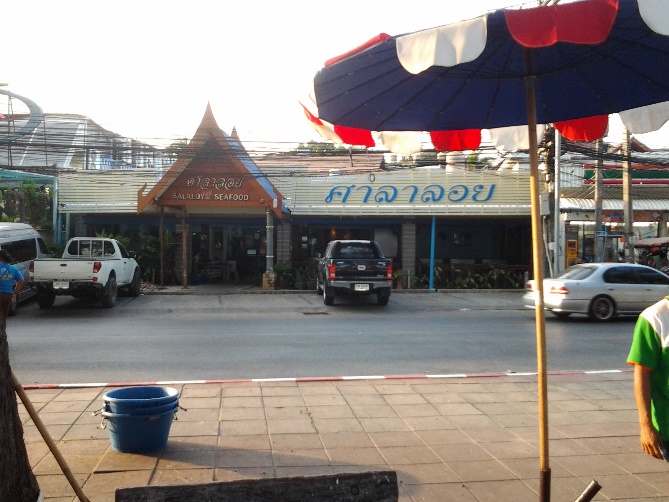 My last journey to Phuket was two weeks ago, introducing my son (16) to the Kamala Hotel where he is to spend a 2 or 3 month stint as a chef trainee. It’s quit a way from Kamala to Rawai but I would not miss what now has become an almost compulsory visit to Salaloy. To say everything was identical to the restaurant of long past years would not be accurate, of course. Serious upgrading has taken place. A new and more extensive menu, improved seating around the concrete cast tables, modest lighting along the shore. Prices of course are higher too but not more than the actual living expenses or current earning power of the Thai population. To prove that point you will at any given time find as many or probably more Thai customers patronizing the venue than farang. That, in my view, is the best testimony to the authenticity of a restaurant in Thailand. Best of all the food is as good as ever. While the kitchen brigade certainly isn’t the same as in the early '90s, the transition or passing on of recipes or know-how has been achieved to a high degree. I spent three enjoyable early evenings savoring their specialties; shrimp vermicelli กุ้งอบวุ้นเส้น Salaloy tiparot and the famed homok talee ห่อหมกทะเล & other delicacies. The sun setting over the sea and the thankfully cooler evening air during the current heatwave period was a well appreciated extra. It also made up for the nearby accommodation in Phuket Sea Resort that was at best average or rather mediocre. The next day and before undertaking the long (300 km) drive back home I would not deprive myself of a last & simple dish that even Thailand first timers will recognize as the famed pad Thai.


The following narration is on a totally different subject.

When John Smith had a serious accident some time ago in Thailand and the ensuing police “investigation” could not determine clear responsibility as to the culprit or the responsible guilty party, the case went to court. The judge ruled in favor of Somsak justification being the famed “had the farang not come to Thailand the accident would not have occurred”. Whether this actually happened or is simply an urban legend I have no way of knowing. But I believe all urban legend have a truthful event at its core. Hence here’s my contribution of a less serious event.

On 14 January, 2016, on an intersection 2 km outside Trang on the road leading to Hui-Yot, a Thai motorbike driver ignoring the red light crashed into the left side of my car. His bike was a write-off, the damage to my car extensive. The motorbike guy was taken to hospital but to my great relief had no serious injuries and was released to go home the same evening or possibly the next morning. The only person who saw what happened just called the police and then left the scene before I could ask him to remain on the scene until police arrived. It left me with no witness to the accident.

It turned out later that it would not have mattered anyway. As is customary when road accidents occur, I was taken to the nearest police station in Klong-Teng sub-district. Three policemen conducted a quite friendly interrogation. Strange though, none of them seemed to be interested in my description of the accident. Here’s what I was asked; Where you come from? How long you stay Thailand? Why you live in Trang? Why you can speak Thai? You have farang wife or Thai girlfriend? How old is she? And so on. Again, all in a very friendly and conversational tone and as I learned later mostly conducted to fill in the time until the meanwhile summoned insurance guy arrived at the station. Once my policy was authenticated and confirmed that it was paid up, and the driving license in order, I was free to leave but asked to come back at 10 AM the next day. Having grown up in a country where being on time is of essence I arrived well ahead of time. As a young man I once had a boss tell me “to be on time is coming 10 minutes before time”. Not something to retain for Thailand residency where on time interprets as “at least half an hour late!” The insurance guy arrived an hour later and we waited till 12:00 only to be told that it was lunch time and we should come back the next day. We did and this time the motorbike driver was there too, accompanied by what must have been his entire extended family, probably about 8 or 10 people. The same scenario as a day earlier took place and by lunchtime I left leaving address & handy # to contact me. I never was contacted but learned later from the insurance guy that it was of no importance to establish accountability of the faulted person. Important was to have one of the guys in possession of a first class insurance that would pay for all damages on car & motorbike who’s driver not surprisingly did not have insurance. 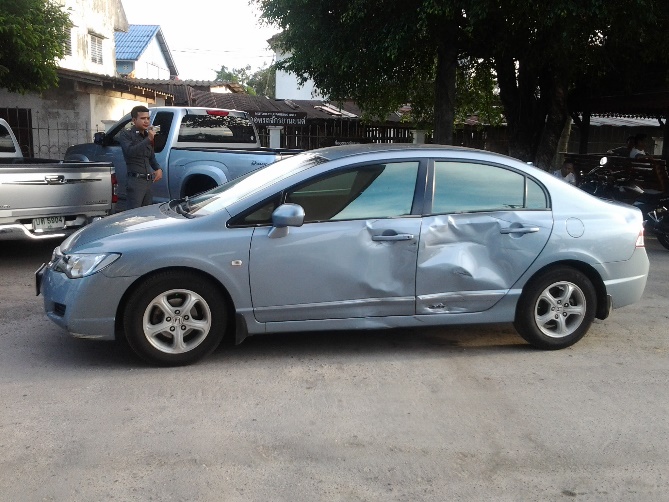 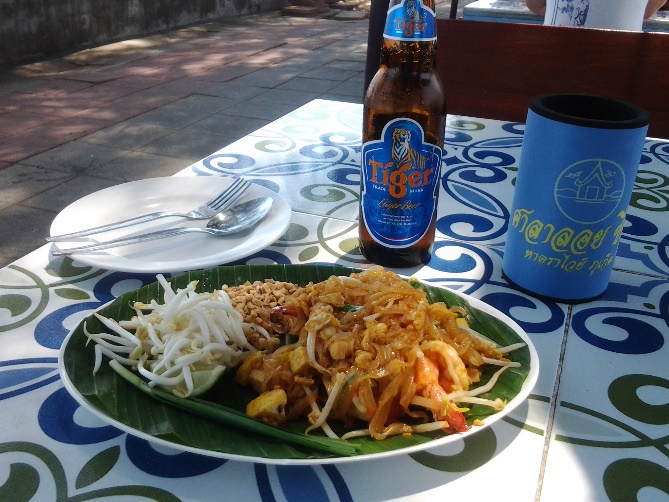 Repairs to the car took longer than expected (3 weeks) and the insurance declined to pay for the rental car during this period. Fortunately however my own car was ready again for the Phuket excursion related to above.

It's great to hear that that restaurant you so like has remained good over all this time. One of the sad things in Thailand is that deterioration seems to be the norm and few venues remain good for a long period of time and even fewer actually get better with time. One of the few that has improved over time is Bourbon Street, but off the top of my head I cannot think of any others.