Something Special Happened On The Way To The Farm…

Why doth virtue prevail so often? Well, temptation has not really got its act together…

Almost 3 years ago now. Absolutely true story. I may narrate some words of dialogues not 100% as they were. Being German, doing nearly all the referred speaking in Thai and transposing it in to hopefully decent English now, well, I had the rare chance to spend 30 days in Thailand alone, 'on the farm'. Wifey had to work, kids in the final throes of high school, and I found out there were 5 weeks of holidays for me that would just evaporate if not taken until the end of March.

Therefore, the 18th of March, 2013, saw me setting off for Thailand – giving me a special 'farewell' with a snowstorm which deposited about 8 inches of snow, what else, all over North Germany. 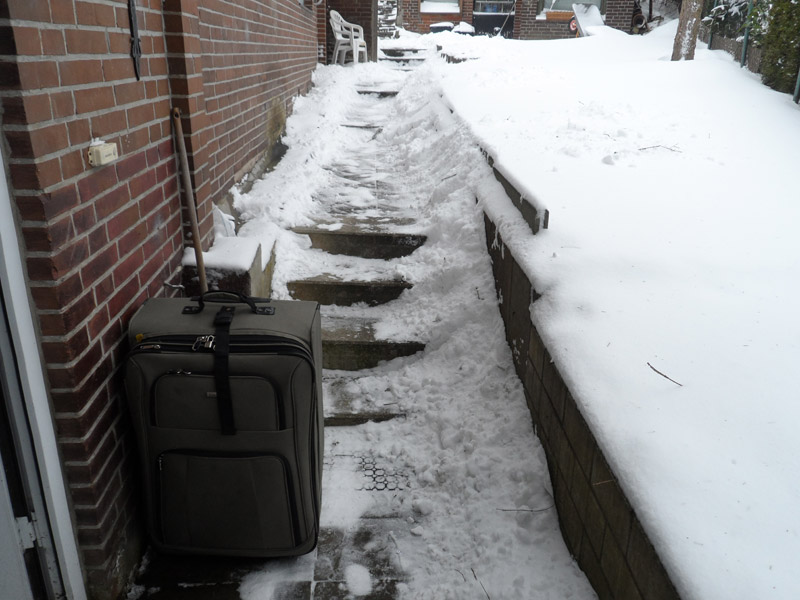 My wife had agreed to take me to the station for the Airport Bus to Hamburg at 4 PM. But she did not turn up in time, so we lugged the suitcase (27 kg) to my small red car and I wanted my son to take me to the terminal. THEN my wife arrived and insisted that I checked her Merc A-class oil and water. 'Fxxx…' and if she had already unlocked the hood then I would not have managed to tear a nasty gash in my hand. 'Fxxx'… again. Added some oil (was ok, only a notch under mid-level) and from the oil-wipe-tissue I improvised a bandage not to drip blood all over the place.

So back in my car, off to the station, but when we arrived there, the Airport Bus was just pulling out of the other end of the terminal. 'Fxxx'… and a quick (yet not quick enough) driver change, “Follow that Bus” to catch it at the next scheduled stop, Neumunster, 20 miles further…

10 miles out on the Autobahn, in front of us – is that the Airport Bus? 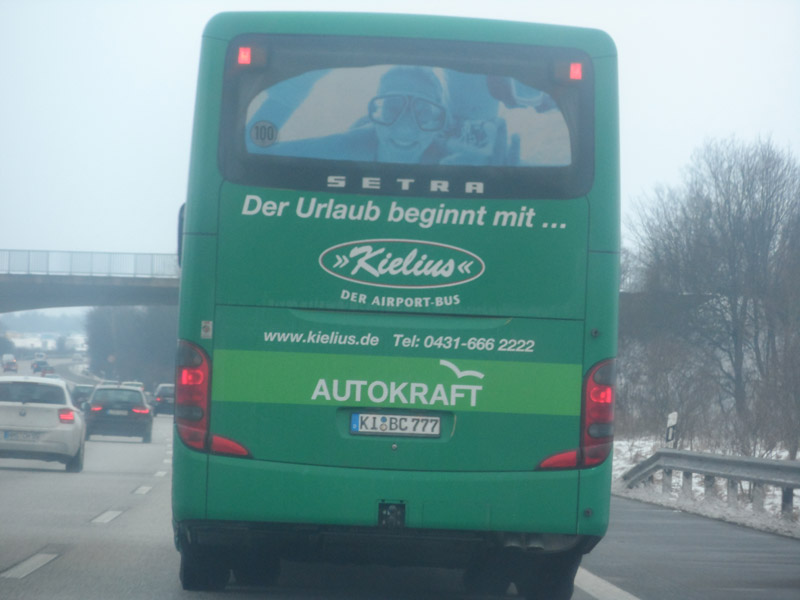 Finally caught the bus in Neumunster, I boarded and my son drove the 'red crackerbox' back home. Uneventful flights from Hamburg to Dubai and on to Bangkok. Arrived at the trusty Miami Hotel on Sukhumvit Soi 13 around 6:40 PM Bangkok time. Online train reservation seemed not to function for the next day as it was after 6 PM so I booked a Nok Air flight from ole Don Meuang at noon the next day.

Meanwhile, around 8-something PM, I headed for a look out along Suk, possibly in to Nana Plaza. That I usually do even when 'with family', but my wife knows it is for me in the style of 'Schalke and the soccer Championship Bowl – Just Look, No Touch!' German 'Bundesliga' insider joke that because Schalke from Gelsenkirchen has come mighty close to the top a couple of times, but the last time they actually carried the trophy home I was still soiling my diapers! That was quite a long time ago. Schalke is an impressive tradition-rich team see http://www.schalke04.de/en/

At the Soi 4 corner, all kinds of tasty Thai food… 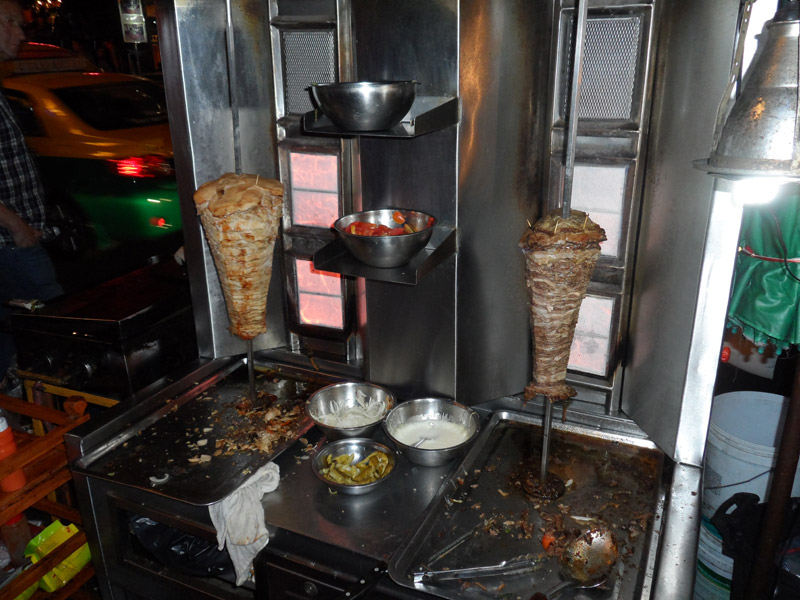 Now they even have 'Döner' there which is originally a Turkish specialty, however, with meats often of questionable origin and state, yet the saying goes 'Döner macht schöner', Döner makes you more beautiful! Wow, if that really worked THAT sure is in real need here at the Suk/Soi 4 corner… 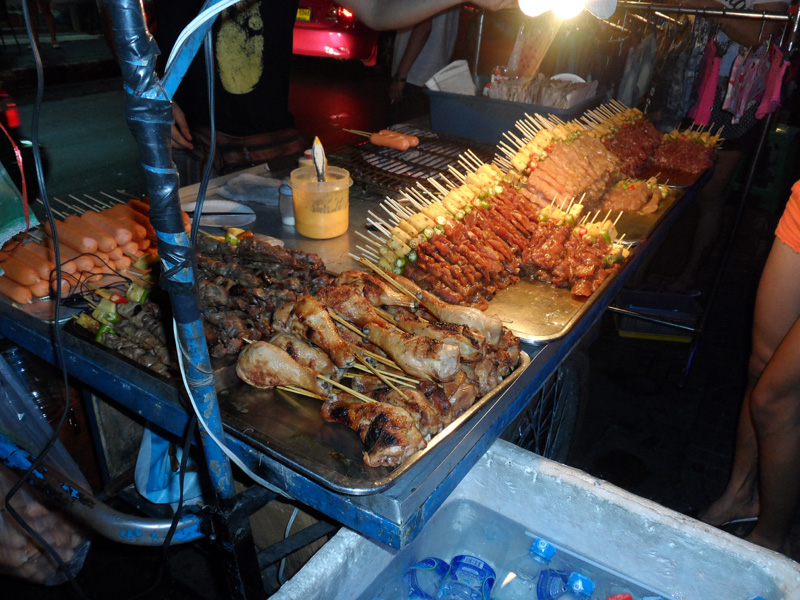 Strolled in to Nana Plaza, past sheer legions of touts, to the third floor, maybe it was Spanky's. Consented to be pulled in there because they did not seem to be as desperate as others to get me inside. Ordered a 'nice cold beer Singha' and had a look around. Novelty for me, the girls were moving / dancing on top of a mirror! And well, because they all had sort of skimped on underwear, quite a revealing surprise there. As the good old pointy-eared Spock might have commented, “Fascinating” it was. I sampled my beer, stayed rather cool as an interested observer.

Now I speak pretty workable Thai now after 25 years in and out of the kingdom, and I understand more than 80% of what is said. My utterly relaxed attitude must have surprised the girls, and soon they tried to find out what was going on with this apparently non-standard farang tourist. They relaxed visibly when they found out I could communicate easily in Thai, told them 'cha-cha gadai' take it easy. I know well how it all looks, I am old enough to have known quite a lot of them.

They accepted with a smile that 'I have a Thai wife and therefore no money for a mia noi! And they really enjoyed my nickname 'Lukchang', the elephant child! When I rendered the Thai kid's song of 'Chang, chang, chang,… nong kai hen chang…' they got the biggest kick out of that, I would not call it 'singing' but it was sure something they would not have expected from a farang. The one girl with the – ahem – sweetest lower parts smiled, seemed to think and said she remembered her mother singing that for her. I nodded, knowingly: “Well I did that for my son just when he was born, and he calmed down immediately, he sure knew it well from hearing 'Chang, chang' for some months already!” Another deep smile, there.

Unusual conversation for a Nana girlie bar, sure. One more thing that gave us all some shared belly laughs – I remembered some old jokes about elephants, probably 40 years old from Germany, but as you know, “Elephants never forget”, like the one with two elephants seeing a naked man for the first time and feeling sorry, “How on earth can he manage to ever grab enough food with such a tiny trunk!” and the jokes sure did not lose their pachyderm charm when I translated them to Thai.

I even tried, partly successfully, to get another concept across – that I thought these 5 girls to be really beautiful, each in their own way, but that beauty extended to the parts I could only see in the mirror. And I told them that whereas one can openly admire beauty of a flower, a face or a landscape, THAT special also very natural beauty down there is always hidden, ignored, shunned – yet any notion of 'dirty' or 'evil' does in reality only exist in the mind of the ignorant observer. “You are works of art, by Buddha, God or the Kamis, be proud of that, proud of yourselves, ladies!”

Beautiful “Miss Sweet Lips” looked into my eyes, mine sort of locked into hers, I concentrated and yes, lightly teasingly touched my upper lip with my tongue. Bet you I was not thinking of MY lips nor of any facial lips at that moment. To her and my utter astonishment she reacted with a distinct joy / surprise gasp, a twitch I could clearly see in the mirror and a reflection of that total surprise in her eyes, really!

No, I am not truly psychic though I do sometimes come close. My tongue did not really make any contact with her, anywhere. But I knew what I was imagining when my tongue delicately touched my lips – she knew what I thought, my eyes reflected that I saw she knew, she saw that – wham! Like an accidental screeching feedback from a microphone and an amp / speaker, but on the pleasant side. It was her imagination that did most of it but wow, what a moment of unexpected contact, closeness of the mind and yes, body!

My thoughts: “Old man. Look but no touch. Think of Schalke! Married man. Bit older than my son.” So far the voices of reason flashing through my mind. To be countered by her eyes, her smile, turning from almost bewilderment, surprise to wonder, touching on enjoyment.

This is special. 'A Miracle of Rare Device' – decision, YES: “Lady, would you enjoy to spend the night with me, long time? I am old but experienced, gentle and never dull. I will make you fly all night and you can take me up a few times on your Angel wings!” More surprise in her eyes, in her smile, turning into an expression of joy and anticipation. A deep smile that sure showed on ALL her lips…

Wow, is that really happening? Yes. But alas, dull old virtue sure has strange and unlikely defenders. Enter the mamasan. She had just accompanied two Japanese men and two girls to the door. Now she struck at me and 'Miss Sweet Lips' probably unwilling to relinquish one of her 'stunners' for the rest of the night. Started to chatter, then almost yell at the little miss, machine-gun like, obviously unaware that I would normally understand 80% of a Thai conversation, yet in my present state of a very aware mind that rate almost peaked. “How can you go long time now – with that OLD man! He will (well I leave that out here, feel free to insert some abuse to the worst of your imagination and beyond) … Much better to go short time now. Can do that some more times. More money and more sanuk than with an old codger…” A faint 'He will make me fly all night' was brushed away mercilessly with more abuse.

The magic was broken. A hurried short-time in a sleazy short-time room here would have been almost like a desecration. Would have paid for NOT having to do it. 'Miss sweet lips' was forced back a few steps by the Gatling-gun mouth of the mamasan. Gave me the chance to turn to one of the waitresses. 'Check bin, khrap'. Paid the bill. Interrupted the harridan and told her, in well-understandable Thai, that I would relate her kind and explicit insights about older expats to an internet forum with more than 50,000 readers. That sure stopped her 'Pak hi'*. Leaving, I got a sad smile from the little miss but she had the decency and understanding not to ask me about the offered short-time.

Left Nana Plaza, finished the evening with a pitcher of Chang in the Game sports bar, looking at a rather dull victory of ManU against Everton. But well, I will never forget that magic moment when my 'in-the-mind-tongue' seemed to actually connect!

Strange that virtue often prevails because temptation has not gotten its act together!

*Pak is mouth, slightly derogatory (beak) and 'hi' you should know, the orifice just below the 'lips'…

The Brokenman is Repaired Part 16-1