Bottom of the Barrel

Stick’s commentary piece last Sunday, together with Hua Hin Harry’s epic, repetitive but always entertaining series of submissions on trying to find someone to weed his garden, has prompted me to launch myself at the keyboard once again.

There is something of a common denominator throughout both ‘submissions’, and that is the low standard that can be expected from the Thais – wherever they might be. That is the very same thing which has long attracted the same low standard visitors and expats to Thailand. I’m generalising of course, but a considerable number of expats, especially, just wouldn’t cut it in the more sophisticated worlds of, say, Singapore or Hong Kong, and certainly not in Japan. Standards in Thailand are low and you can get by without trying too hard. You can get away with things in Thailand that would soon get you cold-shouldered or in trouble in more civilised societies. In Thailand you can ignore the rules, because everyone else does.

That, of course, is well documented in the forums and is often brought forward as a positive reason for living in Thailand, away from the over-protecting governments elsewhere, the nanny state. In Thailand you can often do what you want, where you want, how you want, and unless you really overstep the mark by a considerable margin whatever you do will be accepted, or at the very least ignored. Nothing wrong with that up to a point, but it does reflect the lack of self-discipline that exists in the country. There is an unwillingness to live by normal codes of behaviour that exist elsewhere for the common good.

Someone on a forum this past week questioned my declaration that riding in the back of pick-ups is illegal in Thailand. I’m pretty sure it is, for obvious safety reasons, but I stand to be corrected. But since when has something being illegal made any difference in Thailand. There is a near total lack of law enforcement and a near total lack of self-discipline. Of course, one has led to the other. But hey, the police know they get paid anyway, so why do any work. Easier to ignore what goes on around them, even if it means that, ultimately, people die. The kids who ride motorcycles with no helmet, the three on a bike, the wild driving habits that go unpunished, dangerous working habits. Rules in the nanny states might sometimes appear to be over-protective, but they are there for a reason. All you need to do is look at the death and injury statistics, whether from road accidents or electrocutions due to unqualified and unsupervised workers to …. I could go on and on, but you know what I’m talking about.

My own wife could have been killed when, as a kid on the way home from school, the converted pick-up she was in crashed. Some of her school friends did die, and one lost both his legs. Years later, her friend’s brother was hanging on the back of a similar vehicle in Bangkok when a motorcyclist with none of that self-discipline we all need pulled out in front, the so-called bus braked sharply and the brother fell off and cracked his head on the curb. The resulting funeral was the first I had attended in Thailand, and while there I was surprised to see so many of the monks had tattoos and were smoking, not quite the image I’d had of them before coming to Thailand. Only later did I discover that many monks are actually criminals spending time in the temple as part of their journey back into society or doing time of a different sort as a means of gaining forgiveness.

The lack of self-discipline I’ve referred to was also reflected in Hua Hin Harry’s tales of frustration in trying to find someone, anyone, to commit to anything. We all know of the phrase ‘Men Are From Mars, Women Are From Venus’. HHH’s thwarted efforts were a similar reflection of the differences between westerners and Thais. Time and time again he was let down by the job applicants failing to show up on time or even at all, or their inability to arrive at the agreed location, or their total failure to grasp what was asked of them. They were totally and completely absorbed in their own world, what they wanted or were doing to the exclusion of all else. Truly, most of them lived on a different planet. They thought only of themselves to varying degrees, and some were clearly looking for a chance to manipulate and exploit.

Someone on this site, either in a quote of the week or in a submission, not so long ago described Thais as the hillbillies of South East Asia, and I cannot think of a better description. Well-meaning, but simple-minded and ultimately doomed to live life in happy ignorance due to a lack of ambition or interest in anything or anyone outside of their little bubble. And the biggest irony of all is that they are so protected by their global insularity, their lack of desire to mix with others which Stick documented from his observations in New Zealand, that they have no idea how low their standards are on the world stage. Brought up from birth to believe they can do no wrong, and emotionally and socially crippled by their childish fear of losing face and unable to ever admit they are at fault in any circumstance, they really cannot acknowledge that Thailand and the Thai way is anything other than perfect, when exactly the opposite is true.

Look at the photo below. You’ll see something like this every day, in every town and city. It is difficult to fathom the utter stupidity of everyone involved. The school for sending kids out in a manner that could easily get them killed, the driver for also being oblivious to the danger, and the total lack of awareness of the kids themselves. All totally, totally stupid. Morons, with a complete and utter lack of any common sense whatsoever. Actually, I have long wondered how it is possible for a nation to develop without any common sense at all. It’s staggering, but it simply doesn’t exist in Thailand. 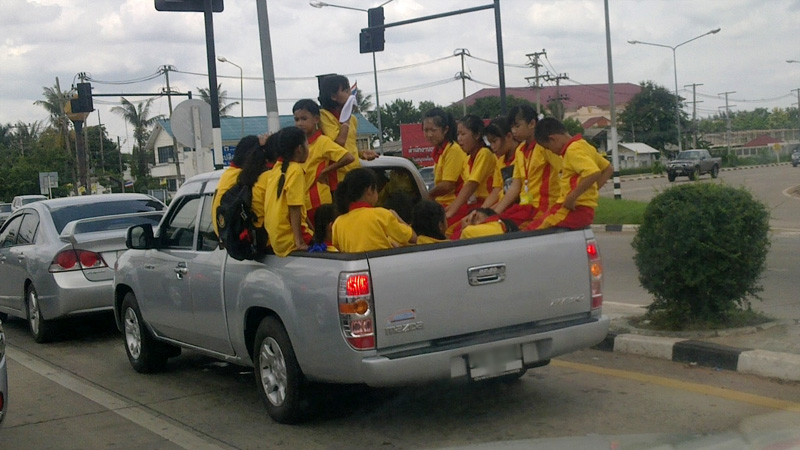 Not only common sense, but the realisation that if they treat someone in business fairly then they are in all likelihood going to be treated fairly in return. Pay a decent wage, maybe even add a few side benefits, and you gain loyalty instead of resentment in the workplace. They will work for you instead of against you. Staff in restaurants might even care about making sure they get your order right, and be concerned if the food is not up to the required standard. I nearly wrote expected standard, but in Thailand you expect nothing as there is always a good chance you will be disappointed.

Instead, staff are exploited in a manner that largely vanished in the west decades or more ago. (I accept that Thailand is far from alone in worker exploitation). Or realising just how unnecessarily unpleasant life can be due to the ‘me first’ attitude, where someone is always striving pointlessly to gain the upper hand, be it racing for the free seat on the Skytrain or selfishly blocking someone’s path with their car just to be bloody-minded. Why don’t they realise that a smile received in return for an act of politeness will make their day a little more pleasant.