Wednesday: Back home after a prolonged weekend holiday with Alain at the comfortable Vogue-Resort in Krabi Ao-Nang.

Thursday: Domestic morning flight to BKK with my son. It’s the end of mid-term holidays. Come Saturday he’ll fly on to his Phitsanulok boarding school for what will be the last term of his 9-year schooling. It’s a long wait at Trang Airport as the flight is delayed due to smog or haze originating from forest fires in Kalimantan + Sumatra (Indonesia). The tuktuk driver on the way to the AP informed us that Hat Yai Airport is temporarily closed & passengers transferred by bus to Surat Thani for the BKK flight. But thankfully our flight can finally land and we are able to depart after a 1½ hour delay.

Alain will turn 16 in April next year. I would have liked him to continue studying but he has other ideas and has repeatedly shown on various occasions his determination to want to go through with it. 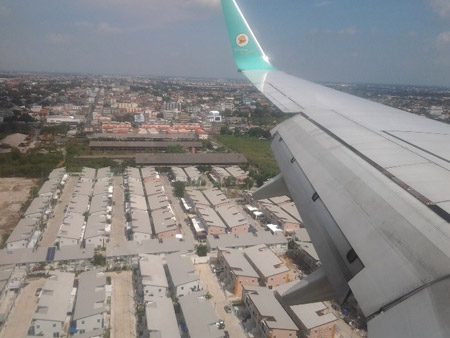 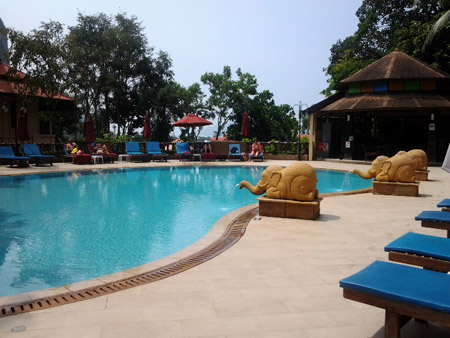 Smooth landing in the metropolis on my preferred domestic airline. Check-in at the hotel then it’s time for lunch at Central Chidlom’s excellent Food Loft restaurant. As always, we both have a tasty meal chosen at variously themed outlets then indulge in the favourite dessert which is a must when in Alain’s company, namely; apple crumble topped with vanilla-sauce and ice-cream. The mood is set for what’s to come next. The short BTS ride takes us to Sala Daeng followed by a 5-minute walk to the Dusit Thani. But our destination is next to the hotel, the campus of the famed culinary school Le Cordon Bleu. Yes, Alain has chosen to become a chef!

Reception by khun Praew, an elegant young lady. She shows us the campus; kitchen, bakery, classrooms and informs about enrolling conditions, fees and more. The culinary school does not come cheap. When I point out that my son has dual Thai / Swiss citizenship and should be entitled to a discount, Khun Praew informs that she has already cited the Thai price and lets me see the difference to the price on the international level. Even so, it’s expensive. On the other hand I’m impressed by the professionalism of the enterprise but will need some time to decide what’s best for my son, other options being available.

Friday: Like most 15-year olds, Alain spends the majority of his free time online on a notebook or his tablet. Only the magic word shopping gets him free for a time in the afternoon. Basketball shoes is the main item on the list and only the best will do. Kobe Bryant is the favourite brand and I let him have his way knowing that I won’t see him again before the short New Year break in over two month.

Saturday: it’s a leisurely morning at the hotel then it’s time to take Alain to Don Meuang Airport for a lunch-time flight to Phitsanulok & back to boarding school for him. For me it’s time to relax. Something I deserved and needed after 3 weeks with Alain. I am what Dr. Ian Corness calls a “second-time dad”, having two grown-up daughters back home with their own families. Taking care of an adolescent without a mother's help has definite pitfalls at my advanced age. A good rest is needed this afternoon and it’s a quiet stroll in one of my favourite parks, namely Santiphap Park in the Ratchatewi or Phyathai district only a short walk from the Victory Monument BTS station where the adjacent small shopping mall also comes in handy. I sat on a bench reading a book until sundown & the park closed its doors. 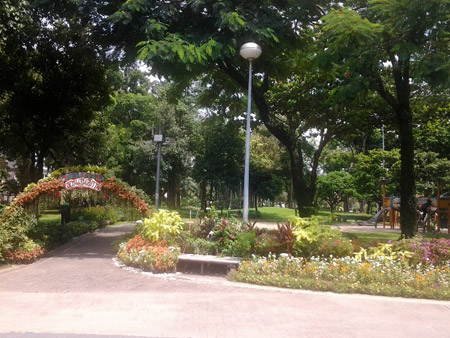 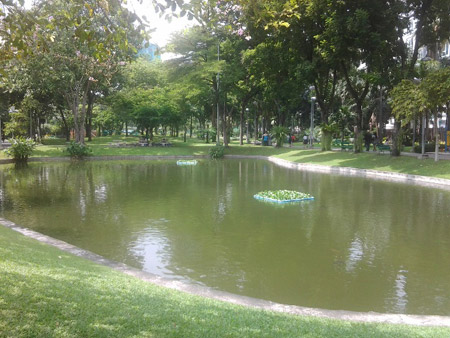 Sunday: Rest and recreation or R and R is I believe mostly a military term to describe respite from military combat. But it seemed the appropriate words for this day. After a full day's rest mostly at the hotel pool I needed some action tonight. I started off at another favourite of mine, the Little Italy restaurant near the Asoke intersection. An authentic Napolitano Pizza and good Italian wine that only a true European (who has travelled extensively in Italy) can appreciate. The anchovies, olives and capers just don’t taste the same anywhere else.

Could I avoid strolling through Soi Cowboy afterwards when I was so close? Of course not. And I didn’t get very far. Past Baccara, the girls outside Shark enticed me to enter. Almost immediately I caught the eyes of a sexy dancer or more likely she caught my eyes as a possibly easy target to offer a few lady drinks. And she was right so I did and later also to her “best friend” who miraculously showed up after a while. I know the girls' abuse these days when it comes to lady drinks but I hate being called a keeneow and did have fun with the girls after all. I never intended to barfine and they were disappointed or so they said when I left. But after the wine and Grappa earlier on I needed to sober up a bit and switched over to soda water the whole time I was there. When leaving it was just about midnight and I decided to check out Soi 4. In recent years I’ve only rarely been there at a late hour and I was surprised how busy the soi was. Absolutely packed with people especially around the plaza entrance. I decided to walk up to the 7-Eleven close to the Davin Hotel and then turn around and back down on the other side of the street. A young freelancer wearing bright red sneakers and lips painted almost the same colour stood out. I had to admit that finally I was in the mood and took her to a nearby short-time hotel. A very quiet girl she was at first but for a reason. I don’t normally advertise my Thai language knowledge but the girl was only able to say a few words in English. When she realized I understood her lingo she easily opened up with her life's tale. It’s hardly worth repeating here, just a slight variation of the usual got pregnant at 15, the father of the child, maybe her husband left, has a new woman and so on. A sad story we’ve heard dozens of times over the years. I need to make money for my mother & my child.

But why do you walk the street, I asked.

I don’t normally, but need to send money tomorrow to mother in Buriram (why do so many of the girls come from Buriram?) and cannot make enough in my sister's cell telephone shop in Big C near Samrong where I work during the day. Whether it was bullshit or not, the tale earned her an extra tip. She provided an address, telephone # and implored me “You come see me, na!” She then started to do her make up again & apply that horrible red lipstick. I will come see you, I said, but only if you promise not to paint your face that way. No, she said I never do it like that in the daytime. That’s only for the street to make me look more attractive!

I had a last beer and feeling hungry again, a hamburger from the mobile vendor at the entrance to the plaza. Later, lying in bed I could not help but ponder over the fate of these young people today. The difference between the relatively sheltered and privileged future my own son can look forward to and the life of a young girl only 7 years his senior with a future largely compromised already at 22 and not a word of complaint over her fate during the short time we were together. What will their future be? It made me think of crazy Doc Brown in the last installment of the "Back To The Future Film" trilogy, when towards the end, telling Marty McFly that the future has not been written yet but it is your hands, make the best of it!

Monday: Visit to Villa Market in Soi 11 with my usual food shopping list before heading to the airport and taking the flight back home. This time at the scheduled hour and in good weather conditions.

It's (Almost) Always About The Money