There is a peaceful part of Chiang Mai that I love so much – a tree-lined walkway along the western side of the moat, that forms the pedestrian access along the edge of Thanon Moon Muang. The trees are beautiful and shady, with the leaves hanging low so that they almost touch the head as you walk underneath. On a summer day it is nice to sit on one of the benches, holding hands for a while, to reflect and look at the calm waters of the moat – and across to the other side of the moat to Thanon Kotchasarn, where the traffic never seems to end as it spills up from Thanon Thapae to join the chaos that is coming down from Thanon Chaiyaphum. 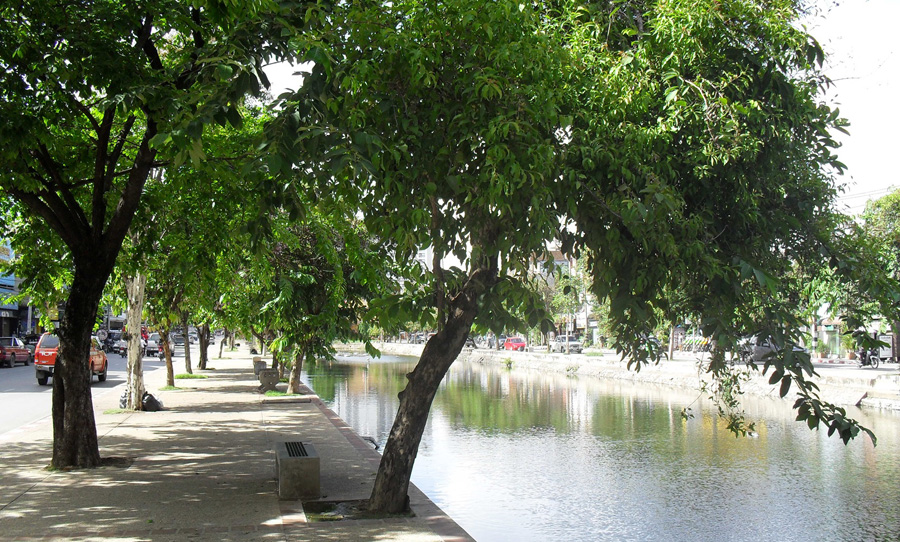 Sometimes in late afternoon, we would walk along this walkway past Pratu Thapae for a few hundred metres, before crossing the busy roadway to the western side of Moon Muang where there is a good take-away food market (Somphet Market) where you can buy chicken, pork, fish or Chiang Mai sausage, sticky rice and a good selection of nam prik. We would often take the food back to the hotel room to eat while we watched the news on ITV. We always came back by a different route across an iron bridge over the moat before turning right into Chaiyaphum and then left down Thapae to the hotel. After the news was over, we would often be bad and go around to the Rotee Vendor's stand, outside Wat Mahawan, on Thapae and then go back to the room to consume those calories. There were days when I really craved a hot dog and I would wait until we came back from the food market, before stopping at Mike's Diner on the corner of Chaiyaphum and Chang Moi, and waiting while the girls made two hot dogs for me with barbecue sauce. They were pretty good too (the girls and the hot dogs).

Visits to Wats were big on our agenda with Wat U-Mong being one of those I regard as favourite. Built circa 1297, it is unique in that it is built largely underground on a system of tunnels. On first appearances it seems to be run-down and lacking in maintenance – but it feels right to be as it is. What I love about it is that it is far enough away from the hustle and bustle of the city to allow one to experience a feeling of true peace. A lovely spot in the grounds is down at the bottom of a walking track where there is a pond containing fish and other wildlife. It is very peaceful to sit there for a while to reflect on life and the good fortune to be able to enjoy pleasures such as this. There have been times when we have gone to three different wats in the same day – always seeking out a meeting with one of the monks and paying our respects.

Peace is something I am grateful for having – yet it seems as though a large part of my time in Chiang Mai has been intruded upon by events that brought conditions that were anything but peaceful. It seemed as if things were sometimes stable and the peace of stability was truly something to be grateful for – yet the dark reality of having, once more, to leave was never far away. To live with never knowing when the next crisis would come was very stressful and was very likely part of an inevitable acceptance that merely served to destroy what peace could be found in the time shared that we valued so strongly. Looking back to that period, there is a wistful longing in me to be back there again in that time frame. Even with peace being a fragile commodity at times, back then, I would rather have that than nothing at all.

When we felt like being a bit posh, we would walk down to the Chinatown and Talat Warorot areas where there is a pedestrian bridge that crosses Nam Mae Ping to near where Le Brasserie restaurant is located. Music is a feature of this venue – mainly in the street-level section – but we would always go down to the lower area that borders Nam Mae Ping. The Maître d' there was a tall, immaculately-dressed ladyboy who would always show us to the same table with that wonderful view across the river to the lights on the other side. The food and the service were always first class under her watch – and just being there with the one I love gave me the feeling that I never wanted to leave that place.

Sunday evenings were always special as we would drive, with our sawngthaew driver, out to Mama and Papa's house, near Saraphi and take the family to dinner at a nice nearby restaurant. The driver would have the meal with us as well and would take us back into town after dinner. I always remember looking at the sunset behind the hills near Hang Dong, to the west, and thinking how beautiful the colors were, reflected in the whispy clouds.

Peace can be found anywhere – it is most likely to be simple things that bring it on – it doesn't necessarily mean we have to be in Thailand to experience it. Way back in the dim, dark past I remember living beside the main standard-gauge rail line that connected Brisbane to Sydney. My wife at the time and I built a lovely cavity brick house on a small acreage – a really lovely house with exposed cathedral ceilings of large dressed cypress pine rafters on laminated beams, supporting cypress pine tongue-and-grooved linings above and on the dividing-wall coverings. The rest of the internal walls were of exposed face-brick. I had the house designed by an architect, following my rough idea of the floor plan. We personally did most of the construction ourselves – except for the electrical and plumbing work. Building that house and living in it was a very satisfying project of love.

Some of my most peaceful times there were in the late afternoon, sitting with a beer and relaxing, while watching the freight trains thunder past. I would go walking along the rail permanent way, soaking up the aroma of spilt diesel fuel oil and creosote from some of the new sleepers – recently replaced by the fettling crew. At night, the sound of a northbound approaching freight train could be heard long before it reached us – the stutter of the V12 ALCO engines on a lash-up of 3 or 4 locomotives working hard – driven by the one crew in the leading loco – and the unmistakeable whistle/whine of the turbochargers was just music to my ears. I still say hearing that could send me off to sleep.

Night time was always the busiest time on the line with perhaps 4 or 5 trains in each direction on the single track, needing to "cross" at Greenbank or Kagaru, where crossing loops were provided. Even now, I sometimes wish I could be back there again to experience the peace that I knew there.

These days I have a lot of time to reflect on what was – but peace doesn't seem to come to me very often now. My condition is by no means unique as I imagine many guys are now in the same situation – and that probably goes for the ladies who were in each of our lives at any particular time. Never assume that the ladies that we remember have no feelings for what once was. Sure, there will always be the hard-nosed on both sides of the gender line – those who are driven by greed and laziness – but there are some true gems that all of us have known in this wonderful land. It is those ladies whose memory makes us want to reflect back to better times.

But back in Thailand – the most peaceful time of all for me was falling asleep beside the one I love. It wasn't all about the sex – it was more to do with the closeness – the bond that kept us together. I guess peace can come from different things for different people – but peace for me has always been an internal thing that comes from being comfortable with wherever you are or whomever you are with. Perhaps I have been extremely fortunate in finding the partners I have known and loved because I have nothing but good memories of them all – and that gives me a great deal of peace to offset the mundane trivia and trials that modern life throws at us on a daily basis.

I often wish I had stayed in my first job after leaving school – a trainee engineman with the railways – instead of changing to newspaper work and music as sources of income. The dreaded lure of the purse took charge of my sensibilities. Even after leaving the railway job, I would hang around with the drivers, observers and fitters at Yeerongpilly diesel depot, soaking up the smell of diesel fuel and listening to the slow beat of the big diesels idling on one of the "out" roads – waiting for the crew to take charge. I can still remember sitting in one of the 442 class locos after the floor had been mopped out – soaking up that sweet aroma of disinfectant, detergent and diesel oil – and feeling the vibration of the that big V12 engine that would soon come alive to show it's true colours on the main line. Even at the late stage of my life in Thailand, I would watch the movements at Makkasan railway yards – so I guess I really should never have left that first job back home.

Where would I be today if I had stayed in that first job?

When I was young, all I could see was the future, stretching away into what seemed like infinity. How attitudes can change as we grow older and into adulthood. Now, in retrospect and to be perfectly honest, the more I see of the present, the more I wish for the past and the simple peace I once knew.

Where Is She Now?