This is the second contribution to this saga of a grave miscarriage of “Justice” in favor of political and economic interests as well as another example of blatant discrimination against Ladyboys. The author still prefers to remain anonymous at this stage, but may disclose his identity at the appropriate time – probably after criminal counter-charges have been filed against Mr. “Tour Guide”, the intoxicated and revengeful accuser who’s account is full of lies and distortions while omitting essential facts which compromise any credibility to his “side of the story”.

Let’s take a step back. Do you remember a previously reported confrontation between a ladyboy bar worker and an Irish expat on Walking Street (in early May, 2014) – published under “juicy” news headlines like “Ladyboy Bitch Slaps Irish Expat” ?… Hey, why should a local reporter bother to think beyond the widely publicized stereotypes about those vicious “men in a skirt” scumbags destroying Pattaya’s tourism image? – A more intelligent and critical reader commented the distributed photo of the “poor Irish Victim’s bandaged head” – surrounded by about half a dozen sympathetic police officers – with an interesting observation: “An eye-witness claimed the Irishman was pissed and feeling the ladyboy’s boobs before he got assaulted. His side of the story appears to be a face-saving exercise! There’s two sides to every story!” – EXACTLY! (Too bad that some reporters never heard about “fact-checking”.)

Back to my long-time personal friend Ann’s case, who’s real name Phatthaya, which has been proudly presented to a wide audience through a second high-visibility media conference by the local Police Department: What an ironic twist that Phatthaya is the newest poster-child (or scapegoat?) in Pattaya’s heroic fight against the ugly image of “Sin City” – eagerly assisted by unreflected and defamatory media publicity bare of any supporting evidence. The opposite story is not only much more plausible but actually true – based on multiple eye-witnesses, who have come forward and are willing to testify in defence of Ann’s innocence. 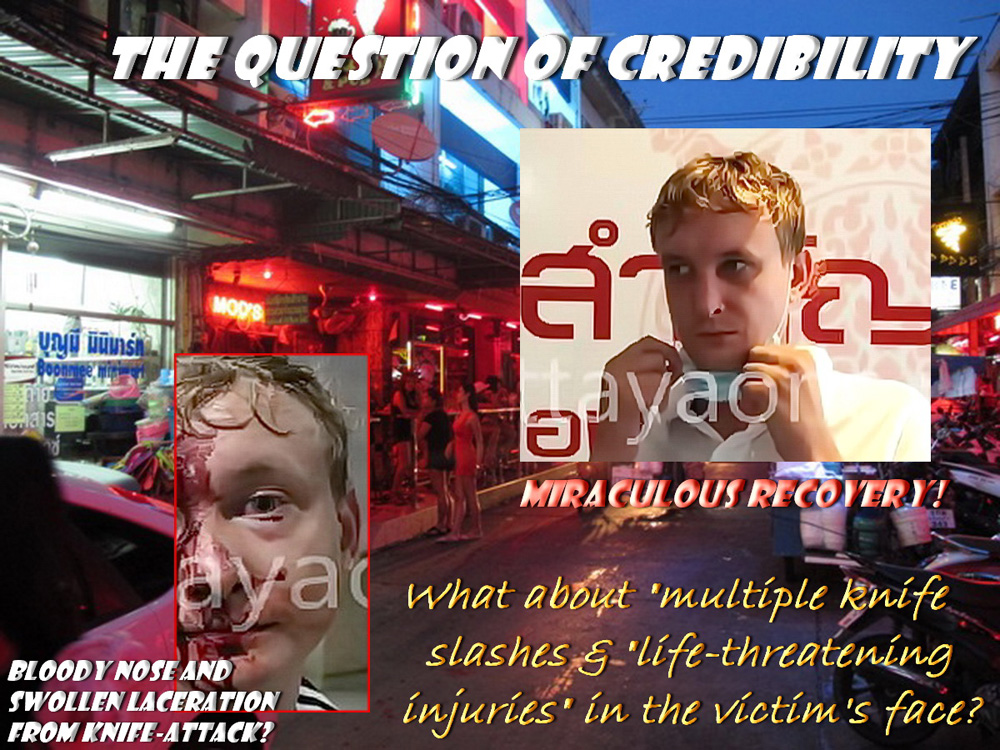 Who cares about a vilified ladyboy’s personal rights and dignity, when media outlets focus only on selling more papers or gain more website visitors? Who gives a damn, while ambitious leaders of “Thailand’s leading sea-side resort” are in the middle of a war desperately trying to prove that they got the message about more “Thainess” from the military government. – Oh well, doesn’t any war unfortunately cause some “collateral damage”? No big deal?

Sorry folks, but I disagree – even if I have to put my relatively comfortable retirement life on the line! What are true friends for, if not during a time of need… not just for sunny days on the beach? Aren’t farang guests – treated as “second class”, but appreciated as convenient ATM machines – in the “Land of Smiles” supposed to keep quiet and avoid meddling in domestic affairs… or else? – Question: Have you ever been in a situation, where you had no other moral choice but to stand up for something that you really believe in, even if political power pressure, personal harassment or physical threats may be a likely consequence? – So, here are some facts to think about:

The original version of Mr. Tour Guide’s” story was that he…just strolled around in the neighbourhood of Soi 6/1 at 02.30 AM, when two ladyboys solicited him for sex (and he couldn’t resist the temptation). Facts: He was observed arriving in a taxi cab, exiting at the Soi 6 entrance on Second Road with an open beer can in his face (an intoxicated man with a plan), following “Ann” to an all-night minimart, where she was intending to buy a pack of cigarettes… approaching her with the proposition to pay for a sexual service “between 2 consenting adults”… as they say in many other countries where it is not only tolerated, but actually legal. 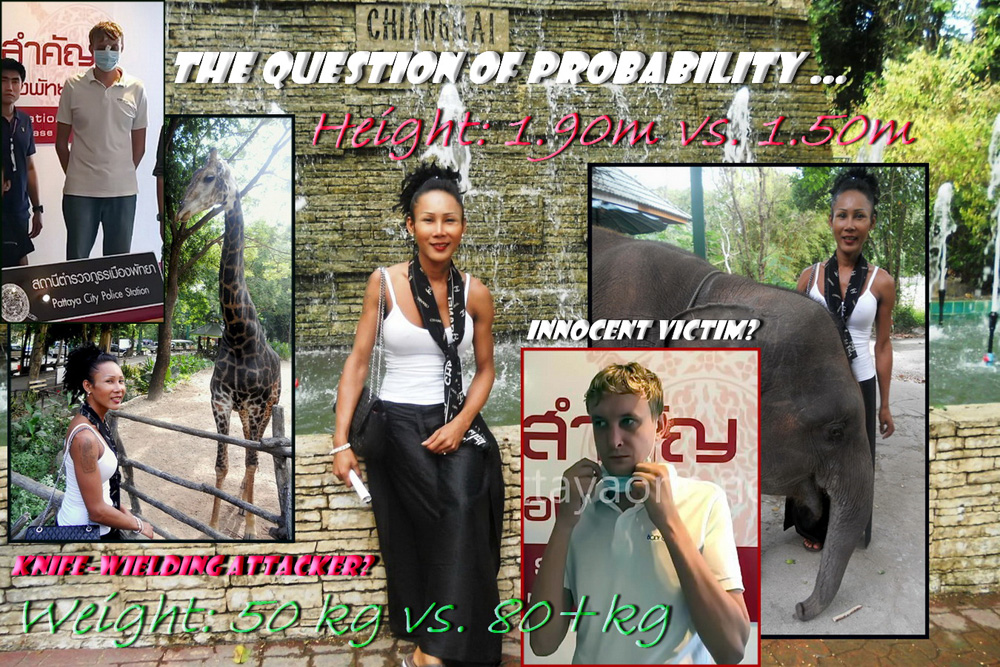 According to media reports, he had sex with two ladyboys and – after about half an hour – got involved in an argument about missing I-phone and 10,000 baht, followed by a physical confrontation ending in an assault with multiple knife-slashes. Facts: According to the 2nd ladyboy accused of illegal prostitution and theft as well, there was never any argument about any missing items – only about his refusal to pay the agreed amount. This witness confirms that he committed the initial physical assault and that her friend Ann acted only in self-defence after grabbing her eye-brow pencil sharpener out of her make-up kit – now identified by the police as the “weapon” used during the “robbery” (available at any 7-Eleven for 20 baht).

Multiple (identified) eye and ear witnesses – including a night security guard of the new luxury Discovery Beach hotel directly across from Ann’s apartment building and a motor-bike taxi driver stationed in the immediate vicinity of the building entrance – have observed the guy’s heavy fall down the exterior metal staircase, causing serious self-inflicted injuries. Facts: If you take a closer look at the Russian’s bloody face picture, you can see the damaged bridge of his bleeding nose and a swollen laceration below his left eye – easily identified as impact by a blunt object – not a knife or a blade. That object was identified as “metal staircase” and the bloody nose was caused by him “attacking” the concrete floor head-on…

How about the basic concept called “CREDIBILITY”? Maybe we need to consider a closer look at it, if neither local news journalists nor police investigators seem to have a second thought about it. Facts: Security guard and motor bike taxi driver not only observed the Russian “victim’s” accident, they also tried to assist him. One of them testifies that – once he got off the ground, he “stumbled” away but returned to the bottom of the stair case, where he picked up his I-phone he dropped during the fall – claimed as “stolen” in Ann’s studio apartment on the 3rd floor! So much about his credibility regarding an alleged “theft” – later upgraded to “robbery with a weapon at night”. There are even reports circulating in Soi 6 & 6/1 about him taking photos of the entrance before wandering off towards Beach Road and the Police Station…

Some thoughts about another simple idea called “PLAUSIBILITY”? Multiple news reports during the past few months talk about the problem of “illegal Russian Tour Guides” and some – including the Thai Tour Guides Association during a recent DEMO – suggest that the economically important Russian tourism is being protected – in contrast to the DSI (Department of Special Investigations), the Banglamung District Office and the Thai Army, who have cracked down on “Russian Tour Guides without working permits” and raided several Russian tour companies (even the one mentioned as “Mr. Tour Guides” employer – the 7 Tour Company). Some reports even talk about claims of links to organized crime… and also about the “low wages” paid to these illegal tour guides, responsible for high-pressure sales tactics. Any alarm bells ringing? Any questions about the source (salary stub, ATM receipt, bank book records) of the missing 10,000 baht? Any plausible reasoning, why an experienced tour expert would venture alone into a dark alley – after all bars were already closed – with a large wad of bills in his bag or pockets? Neither at the Police Station nor with the so-called “news reporters”!

Assuming you’re an investigator with an open mind, wouldn’t you at least have a few doubts about a guy entering a Police Station visibly intoxicated and confused at 03.45 in the morning and with difficulties to explain himself in Thai or English? Wouldn’t it make sense to at least check his backpack for his I-phone or ask him about the phone number to try calling it? Besides logical first-aid assistance, wouldn’t you wonder about the swelling and the bleeding nose caused by a “knife-attack”

What about the fact, that two plain-clothes “investigators” broke through the door of Ann’s studio apartment within 10-15 minutes after receiving the report? Any chance, you would wonder why a ladyboy, living 10 years in the same home with a sewing machine and her own fashion creations on the table, would all of a sudden turn into a “vicious robbing knife-slasher”, attacking a very muscular 1.90 m tall Russian with a body weight of 80 plus kilos (versus some 1.50m and maximum 50 kilos)? Would a ladyboy with a history as a Tiffany show performer, multi-lingual international traveler (3 years in Europe) and well-known all around the neighbourhood for her creative fashion designs be so (damn) stupid to leave the eye-brow pencil sharpener on the floor of her apartment, while fleeing from the pursuing police force? – Give me a break! My friend Ann simply doesn’t fit the “profile”… Sorry, guys – you picked the wrong “show case”! 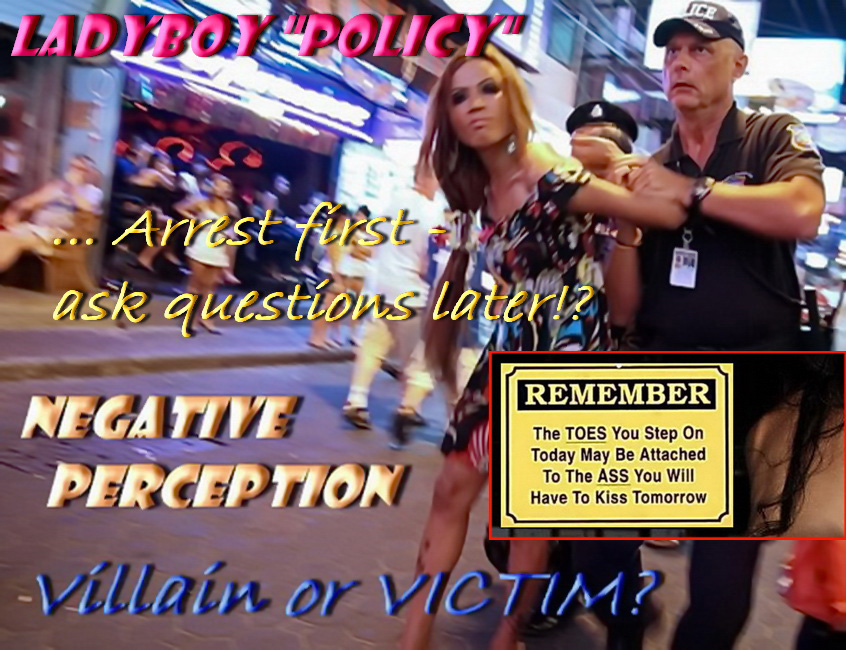 Then again: Why ask questions – for example among the eye-witnesses still assembled on the bottom below the “crime scene” – if you have a different agenda of overriding political ambitions, economic interests and/or specific priorities in your task to “Serve and Protect”? Why bother to even consider the other side of the story – as I learned as an essential rule to be “fair and balanced” during my own past as a journalist – if you already got another “great example” you can promote as a high-profile case of “being on the ball in the name of tourist safety”? So what, if another “man in a skirt”, another “criminal drag-queen” or another “transvestite scumbag” gets dragged through the mud of a public “show trial” – not only as an “accused suspect”, but immediately prosecuted, tried and convicted in the court of public opinion – her personal dignity and her human rights already executed? – What a stunning “success” for local law enforcement!

Where is my friend Ann now? She is waiting in prison with a shaved head in a cell with a large group of male offenders and ladyboy “sisters”. – What about the 2nd accused ladyboy to be part of the sexual tryst and the “theft”? She is a timid “new-comer” in the Soi 6 bar scene, got scared by the incident and voluntarily reported to the Police Station. Surprise: She isn’t sharing the prison cell with Ann, but was sent back home without filing any charges or demands for bail money… Did they tell her about a subpoena or an arrest warrant for her “co-conspirator”? – Of course not – otherwise the “trap” wouldn’t work and they couldn’t report the “big capture” of a fugitive criminal”. – Anything wrong with this picture?

The saga continues as soon as Ann’s bail is posted – with the prosecution of the real offender.

Thai Girlfriend, I Don’t Know What To Think

The Temple Of Truth Is Under Construction