Up front: Sorry that this writer prefers to remain anonymous. Not that he is afraid of some lady-boys, but of the revengeful hatred of a heinous Russian liar. I am referring to the two articles published in the Bangkok Post and online at ThaiVisa on July 22, 2015 and I couldn’t believe that I was reading the naïve story of an innocent Russian angel-face – let’s call him “Mr. Tour Guide” – and two “vicious devils in skirts” of the sort Pattaya’s elite seems to lay all the blame on for the deteriorating “image”? What image?

Here are the two published stories and – please note – the text parts in bold italic should be questioned by any critical reader and reasonable Pattaya expats with some nightlife expertise: 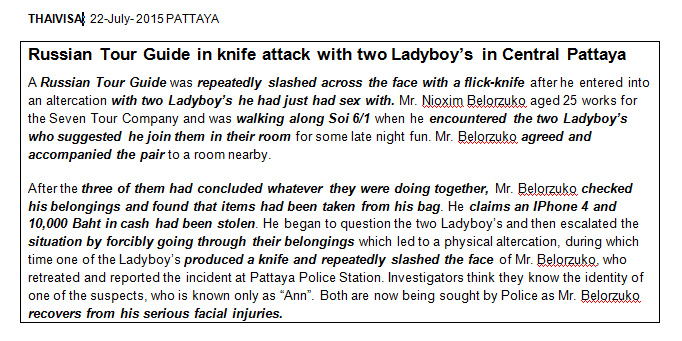 What a surprise: There is a totally different side to this “bloody” story and it took me only a couple of phone calls and a bit of communication with the ones who witnessed, what really happened – or learned about it within a few hours of this “incident” through the insider grapevine, maybe to be labeled the “sisterhood of Pattaya’s preferred villains”.

This is what really happened according to my reliable and honest sources: Mr. Tour Guide entered Soi 6 (not 6/A) from Second Road around 2.30 AM, when – as any experienced night crawler can tell you – this alley is basically dead. He was observed by 2 lady-boys at the corner of Second Road and Soi Six with a can of beer in one hand and a backpack hanging from one shoulder. It is safe to assume that this can of beer was not his first drink at this late hour and his alcohol level probably on the upside. It is a fact that he approached only ONE (not two) lady-boy and it is uncertain who did the soliciting. Does it start with the “Hello” by a prostitute or with the “How much?” by the horny customer? … Nevertheless, it came to a negotiated “settlement” of THB 800 for the service he wanted and he followed this one lady-boy to her single-occupancy room in Soi 6/A – past several other lady-boys along that rather dark – if not scary – “Soi Katoey”, where no reliable tour guide would ever venture into in a sober state … nor recommend it to his guided tourists! One wonders if the hospital checked his blood for alcohol and drugs as well …

Until about 3 AM, only 2 people know exactly what went on in the room, where they conducted the joint “business venture”, but once the excitement subsided, Mr. Tour Guide allegedly (that’s the word writers use to be on the safe side!) pulled a single 100 THB note out of his pocket and drew it onto the refrigerator, claiming that the lady-boy’s service was disappointing and therefore not worth the agreed amount. Yes, that’s the same guy who claimed that he was carrying about 10,000 baht in his backpack… I wonder if he ever took that bag off his back; at least it wouldn’t be necessary for the BJ he got, but refused to pay for! Wouldn’t you get upset, if a “business partner” reneged on a financial settlement as per prior agreement? According to verifiable telephone records, that’s when that “other” lady-boy entered the scene, because she got a phone call from her lady-boy sister to assist and came ONLY to help fending off an increasingly threatening “customer”, who had his mobile phone on his ear, claiming to call another Russian guy to “take care” of the situation… Oh, wasn’t his phone stolen, together with the large wad of cash? Don’t you wonder how a tour guide runs around dark alleys with such a large amount? If you were his employer, would you trust such a “generously” paid employee?

And what about the fight, when he claimed that he had to go “forcibly” through their belongings? The other side of the story says that he started to hit one of the lady-boys with his bag and used his fists on his way to the door blocked by the “cashier”… Oh no, Mr. innocent (but not so sober) Tour Guide, who tried to buy a BJ with a 100 baht bill would never do that, or would he? Is it more likely that these two, oh so vicious lady-boy “monsters” in high-heels, tight dresses and make-up would attack first? Oh well, you decide! And what about these life-threatening knife slashes? Let’s be honest, if you would have to defend yourself against an obnoxious attacker, wouldn’t you grab the next best thing nearby to DEFEND yourself … even if it’s only a high-heeled shoe or an eyebrow pencil sharpener? – Exactly, that’s what this dangerous weapon was, not a knife or anything even close!

You may wonder, why there was so much blood all over the face (oh, what a feast for an eager crime photographer) of this poor lad, who just happened to do a little night stroll with a backpack full of money… According to eye and ear witnesses, he only suffered a relatively minor cut on this forehead and I seriously wonder, if he even needed a stitch or two from “those multiple knife slashes” … as reported by the two featured articles. On the other hand: It was also reported by witnesses in the immediate neighborhood, that he rushed out the door of the 3rd floor apartment, down the steep exterior metal staircase … and – what a shame – he actually didn’t catch all the steps and made a heavy fall down into the pitch-dark alley. Maybe his phone is still in the weeds underneath that dangerous metal “trap” – who knows.

One thing I know for certain: In this case, Mr. Tour guide is the real villain and not the other way around, especially with his totally uncorroborated and absolutely false accusations about a theft that never happened (unless one counts the 700 baht he refused to pay) and a fight that he caused and initiated – not by some “men in skirts” as some totally misguided media propagated. By the way: Did you know that one of the lady-boys even offered him a wet towel to stop the bleeding from the single cut on his forehead? Of course, he had to refuse it too, because the running trail of blood down his “ruined” face makes for a more dramatic background to his side of the story … and much better horror pictures to support his fake claims. – Last question: Who is really ruining the image of Pattaya?

P.S.: Yes, I freely admit that I am familiar with the lady-boy identified as “Ann”, because I have been a long-time friend of hers – not a customer – and had the honour of also meeting her entire very decent and hard-working family as well. This “fugitive criminal” has been living a quiet live in Pattaya for 15 years (!) without any complaints of any such nature, enjoyed years of success as a stage performer at Tiffany’s and made her quiet living mainly as a creative designer and producer of sexy clothing for other lady-boys in the neighborhood. She is the real victim in this horrid saga, because the need to earn a few extra hundred baht during the current economic slump (let’s call it what it is!), combined with the outrageous lies and fabrications by a crazed, drunken sex-maniac with a one hundred baht bill in his pocket, may have ruined her entire life … while the other one is probably on the hunt for his next 100 baht BJ – unless the boss of the tour company is smart enough to send him to Siberia. Cooling off there wouldn’t hurt in his sad case … less than a cut from an eyebrow-pencil sharpener to his forehead.

What Do You Smell Of?