In the 70’s when there were only two bar areas, Patpong and Soi Cowboy, the same questions were asked by bar owners as to how to keep the customers rolling in especially during the week and when tourists as were in the minority.

Bar owners realising that their customers did not want to be entertained by gogo girls every day had to innovate and so came about a meeting that took place in a bar in a small soi off Soi 20 Sukhumvit Road. This was the start of the Bangkok Darts League. What surprised everyone was the fact that there were bars scattered all over Bangkok that I and others had never heard of let alone been to. The meeting was so successful that two divisions had to be formed to cater for the number of teams that wanted to be involved. Bars were sure of a full house at least two times a month by having to play two home matches and two away matches in that time. There were also teams from many embassies and other organisations like Joint United Services Military Advisory Group and from large companies and various banks. In fact the first chairman of the darts organization worked for the Bangkok Bank which also had a team. Some of these teams didn’t have a home venue, however at the second meeting there were some bar owners who turned up to learn more about the plans that didn’t have a team. So a team and a bar were able to join up to everyone’s satisfaction. Bars vied with each other for putting on a good spread which would be free of charge. All that culminated in a first Thailand Open Darts Championship in 1982 held in Pattaya which was such a great success that the second was held a year later in the Windsor Hotel in Bangkok. The league was sponsored by Johnnie Walker and although most players drank beer Johnnie Walker enjoyed free publicity when the results were published in the newspapers each week as did the various bars which were often revisited on non playing nights.

Some world class players attended these Thailand Open tournaments and resulted in some of them touring various bars where customers got a chance to play against them and to join in lucky draw doubles. One such player was sponsored by an Australian beer company and every bar he went to laid on some free beer. Some of the bars in Washington square still displayed pictures of the events on their walls up until the demolition of the square.

One of the largest bars, Loretta’s in Soi Cowboy used to open Saturday and Sunday afternoons from 2pm. Although gogo didn’t start until 4 PM, one could still get a drink and chat to the girls as most used to live upstairs in the bar. The only beers available were Kloster 45 baht or Singha at 40. The girls were mainly from the North Chiang Mai, or Chiang Rai. Some would occasionally offer to pay their own bar fine (100 baht) if only to have a hot shower in your room. Especially if they were feeling tired and it was that time of the month. Before anyone asks short time was unknown and it was 300 baht all night. One time Loretta’s had all their girls dressed in white wedding dresses and customers could buy roses to present to the girls of their choice. It soon became apparent that some customers were determined to buy all the roses for their loved ones regardless of cost and more roses had to be sent for to keep to the spirit of the party. Extra seating had to be scrounged from adjoining bars, as it became standing room only. In the end the roses had to be recycled, so as soon as a girl had 20 these were handed back to the bar and a note made of the number she had collected which was displayed on the girls dance board against her number.

One Soi Cowboy bar turned his bar into a cinema in the afternoon. The idea caught on and another opened in the downstairs part of a bar on the corner of Sukhumvit Soi 19 where the Robinsons department store now stands. The upstairs of the bar had a couple of dart boards and the hostesses dressed in Chinese cheongsams would play a game of darts with the loser buying the drinks. The sight of the girls standing by the score board was enough to put even a seasoned dart player off which resulted more often or not with the farang loosing and having to fork out. The Tavern in Patpong is still there today with two dartboards one at each end of the bar. One of the girls there became Thailand’s number one woman player and any unsuspecting farang who fell for her request to play for a drink was sure to lose. 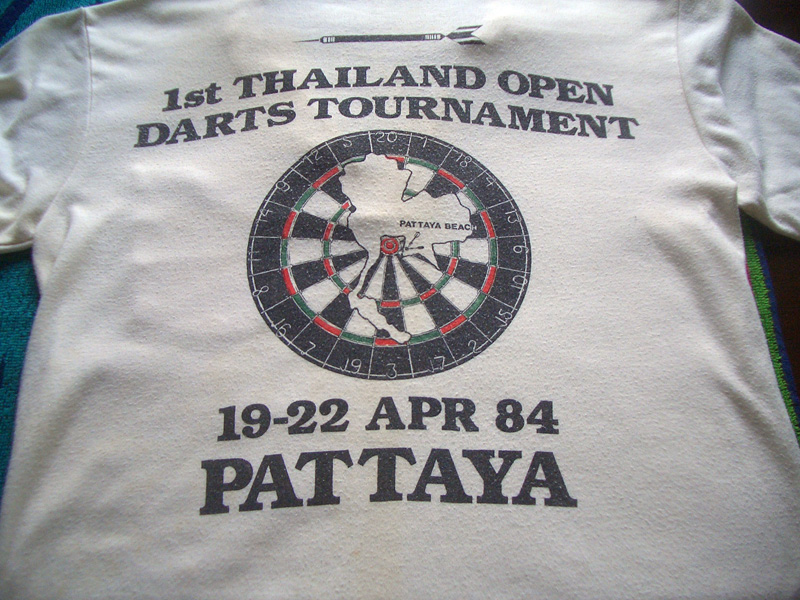 A Little Essay On Filipinas