The City in the Middle of Nowhere

WARNING: No bargirls are involved in the telling of this story.

The great cities in the world usually have origins near the water. London, Paris and Rome all began and thrived since they were near a major river or port. Water brings food, ease of transportation, washing and drinking supplies.

In Asia, Sydney, Tokyo, Jakarta…every major city has an origin on the water. When the Thais wished to move their capital away from Ayuthaya to stop attacks from the Burmese, they chose a C shaped bend in the Chao Praya River to build the first Bangkok settlements. 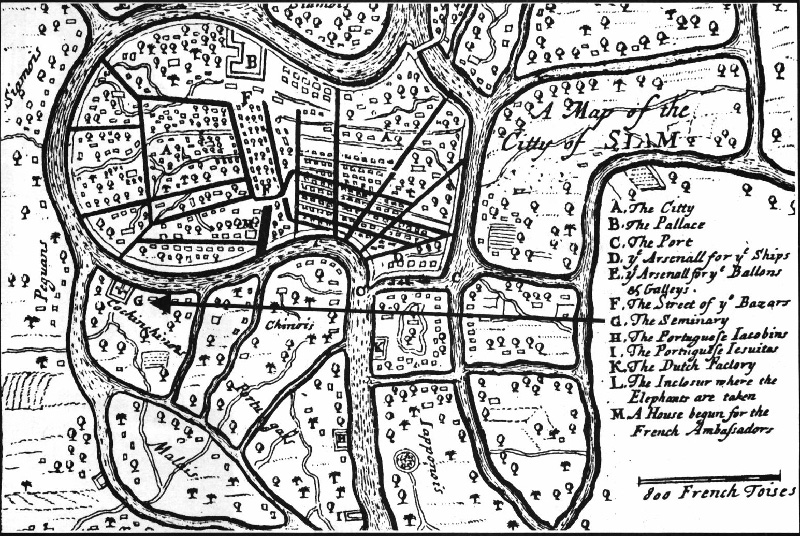 12 years ago the generals who rule Myanmar decided that their capital in Yangon was too close to the water, and could be easily attacked by a battleship. For their own safety and security, they built in secret a new capital in the middle of nowhere, named NayPyiTaw. They officially opened it in 2005, and that day forced all government employees to uproot themselves and move 320 kilometers to a city literally built in the middle of nowhere.

I went there last week.

You might have read in the papers or seen on TV that the ASEAN summit was held there recently. Obama went, as did the heads of most Asian countries. I was invited to speak at one of the business oriented sessions, and accepted only because I wanted to see what this place was like.

Until recently, the only way to get to NayPyiTaw was by driving; a torturous 4-5 hour drive where the main activity was avoiding the dogs that darted across the jungle road. Halfway through the trip, the van would stop and passengers would be invited to get out and take a pee wherever they liked.

I flew. Now Bangkok Air has daily flights from Bangkok direct to NayPyiTaw. Visa on arrival was a 3-minute affair. Arranged in advance by the Conference organizer, all I had to do was show my passport and a photo and pay $50 and the visa was in my passport before I knew it. The airport is brand new and sparkling clean, one of the nicest airports I have ever been in.

Flying in at night I saw huge swathes of light, but the airport was completely surrounded in darkness. The drive to my hotel was interminable, close to an hour. What I saw the next day in the light was that NayPyiTAw was essentially one 8-lane highway that stretched from the airport thru a hotel district to the government offices. Hotels were built every 500 meters or so, with nothing in between. 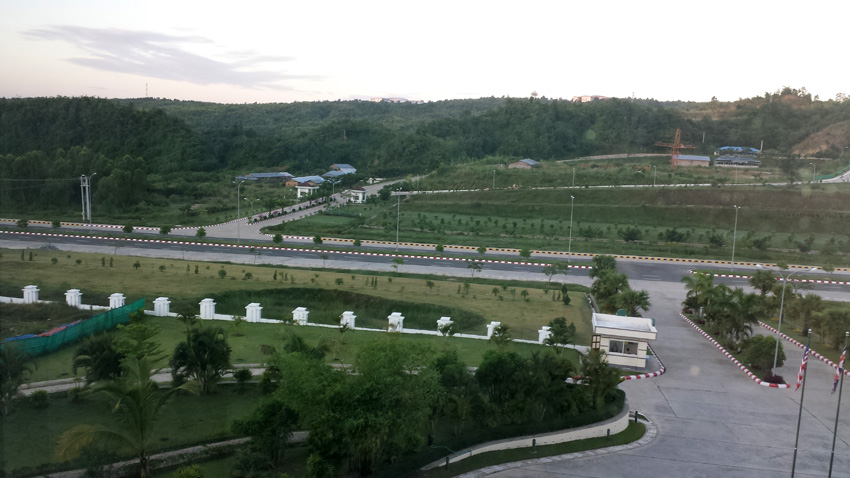 There are no cars, no shops, no restaurants, no bars, no people. Officially the government says 1 million people live in NayPyiTaw. In the 3 days I was there I saw a few hundred. If there are 1 million people I don’t know where they are hiding themselves.

Here is one view taken from a high spot. You can see maybe 50 kilometers in the distance. See any houses? The view is identical looking from 360 degrees. 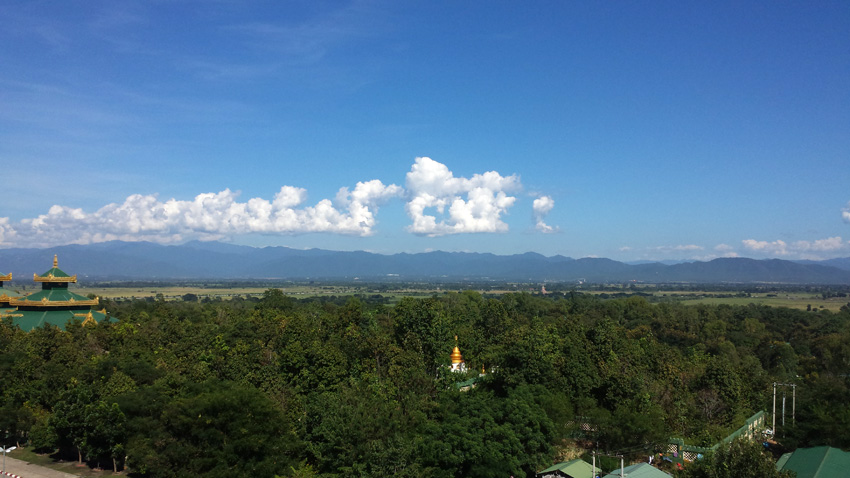 I drove past the National Library and National Museum. Huge buildings. Huge parking lots. Not a single car or tourist bus could be seen.

We were told we had to go see the road that led to the Parliament. Here it is. 20 lanes wide. Not a vehicle on it. 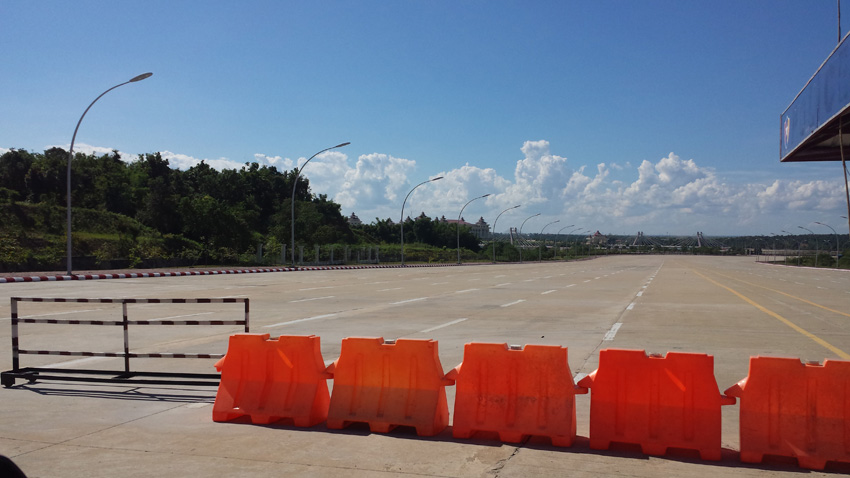 There is no sightseeing in NayPyiTaw. Well, there is one thing. An identical replica of the national monument, the magnificent Shwedagon Pagoda in Yangon. The Uppatasanti Pagoda in NayPyiTaw is an exact copy, although 30 cm shorter. The key difference is that one can go inside which one cannot do in Yangon. 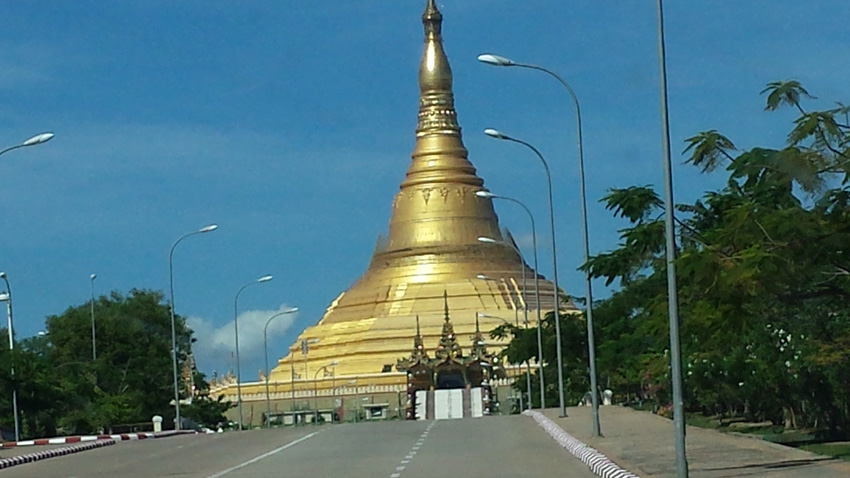 That’s it. I’m all out. I cannot in anyway recommend NayPyiTaw, unless for some reason you have business with the Myanmar government. Otherwise there is no reason at all to go there.

At the ASEAN conference I had the chance to spend some time with Korn Chatikavanij, the Finance Minister for Thailand under Abhisit’s government and the current Deputy Prime Minister of Thailand under the shadow cabinet of the Democratic Party. Although I don’t agree with his politics he is clearly an intelligent and educated man with a keen sense of humor. After our chat I wished him luck in the next election, whenever it might be. He laughed and said “I will need a great deal of luck to win.”

I wish anyone going to NayPyiTaw a great deal of luck.

The Stories They Tell