Many think that to live life in Nakon Nowhere, deep in the Thai countryside, would be like a slow crawl towards death from boredom (Stick included, I might add). Nothing happens except the planting and harvesting of rice and tending a couple of cows by the roadside. No pubs, no decent places to go out to eat, no nightlife at all as the farmers go to bed soon after it gets dark and are slumbering under their fan by eight, before rising again at first light.

Well, it’s not quite like that. In these days of universal communication there is no such thing as isolation – unless one really wants it. There is the internet that can be accessed even from the rice paddy, and satellite TV can bring you Chelsea playing Man U live and in HD, or news of the latest conflict involving people doing their best to kill people they’ve never met, live from anywhere in the world on the News. In English, too.

True, a phone line would be nice, 140 years after the telephone was invented, so I could have unlimited high-speed downloads. Thais do not understand the meaning of the word unlimited when it relates to mobile phones. They blatantly promote unlimited 3G, but then the small print limits you to 1 or 3 or 5 GBs a month. Once I reach that, within a few days, my speed is deliberately reduced by the company by 90 percent. E-mail is okay, watching videos is not. It can take me an entire day to download a one-hour video.

However, none of the above is really relevant to what I wanted to present to you today – my most recent Saturday night and Sunday morning. I admit it isn’t entirely a typical weekend, but it is a picture of life around where I live.

Saturday night, and at around 8.30 I hear a thump outside and say to spouse that it sounds as if there’s been an accident up the road. We don’t bother to investigate because, frankly, if people want to drive the way they do and rely on amulets hanging on the rear-view mirror and patterns painted on the inside roof to ward off accidents, that’s up to them. The road outside my house is long and straight with no hidden dangers, but we quite frequently see accidents as, somehow, drivers find it beyond their ability to stay on the road. Not long ago a lorry found its way into the ditch outside our house for no discernible reason and it had to be dragged out. And not by water buffalo. It needed something a bit more robust than that. 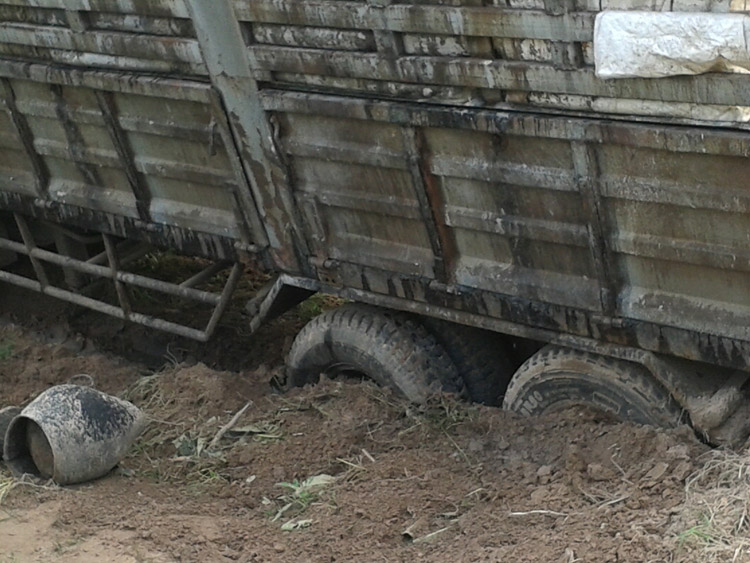 Anyway, nearly a couple of hours later spouse has been peeking through the net curtains and reports to me that she can see flashing lights up the road, 100 metres or so from us, and a lorry appears to be in a ditch. So, nothing unusual then. But we watch from our balcony, and soon traffic is stopped on both sides as a pickup that had picked a fight with two lorries and come third is loaded onto a trailer and towed away. There wasn’t much left of the cab. Next morning we are told the two people inside it were injured, not dead, but given the state of their pickup I wouldn’t give much for their chance of surviving.

The report from someone living in a house beside the incident is that the pickup driver was drunk. Again, nothing unusual there. Drunk driving is very common in Thailand, and is just one of the reasons I absolutely refuse to drive here. I took a look next morning, and glass and debris was still all over one side of the road, and one huge lorry was buried deep in the mud in someone’s garden and stopped just short of the house. That’ll take some shifting. Major, major job. Lucky it’s the wet season and the ground is muddy and the lorry sank, or it would have gone into the house for sure.

And so to Sunday morning, and soon after six spouse and I take the risk of encountering more irresponsible driving and transport ourselves a couple of k’s to my wife’s village. The purpose was to line the road with others to present monks with food. Monks walk the area daily for offerings, but this day it was done on a grander scale. Instead of two or three monks plodding the streets the entire brigade turned out, maybe 20 or so of them, and as they went along the narrow village road they were accompanied by helpers who took the offerings from the monks and loaded them into a pickup. As part of the celebration everyone dressed in traditional clothing, including yours truly. 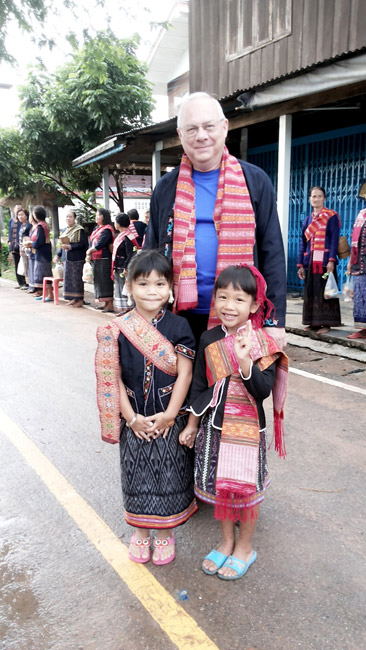 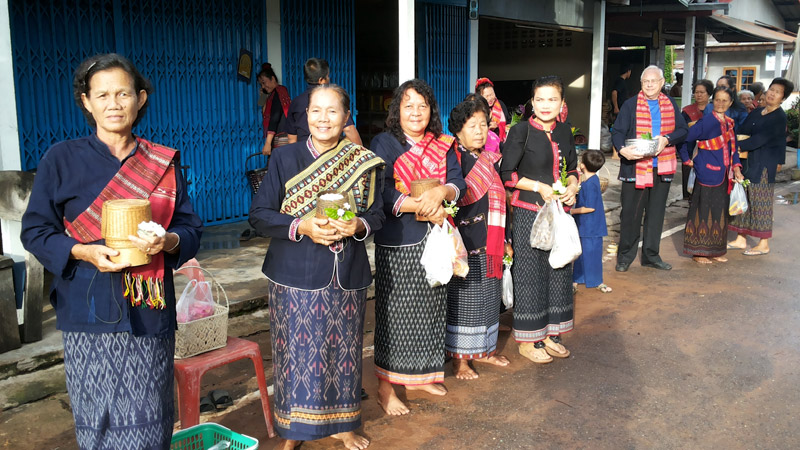 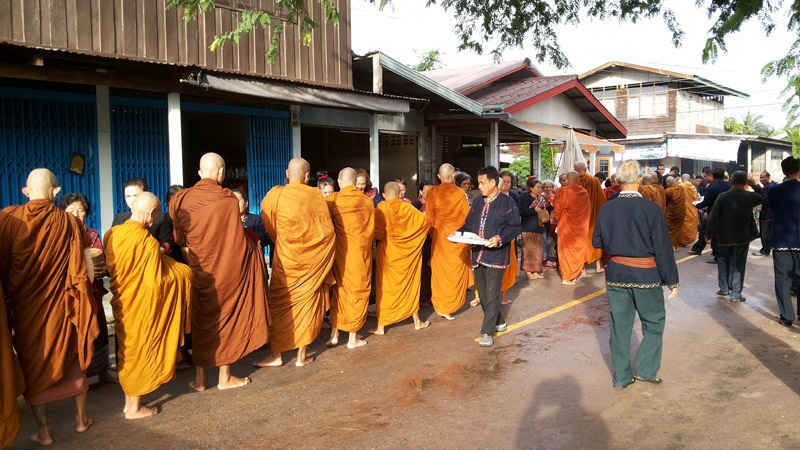 That done, we went to a local market that is held on the 10th, 20th and 30th of each month. No doubt it is held elsewhere on the 9th, 19th and 29th etc. It’s the same stuff every time so we browsed, mostly. There was, though, one extra attraction this time in the form of a young elephant. The price of clothing in particular is ridiculously cheap, with shirts or shorts or even dresses for just two or three dollars, for example. Okay, perhaps they might not be overly smart or well-tailored, but you don’t exactly have to dress up when living in the countryside, do you. Except for meeting the monks or for a wedding or funeral. I have two sections of clothing in my wardrobe, one for local wear and another for when I venture down to Bangkok or to work overseas. 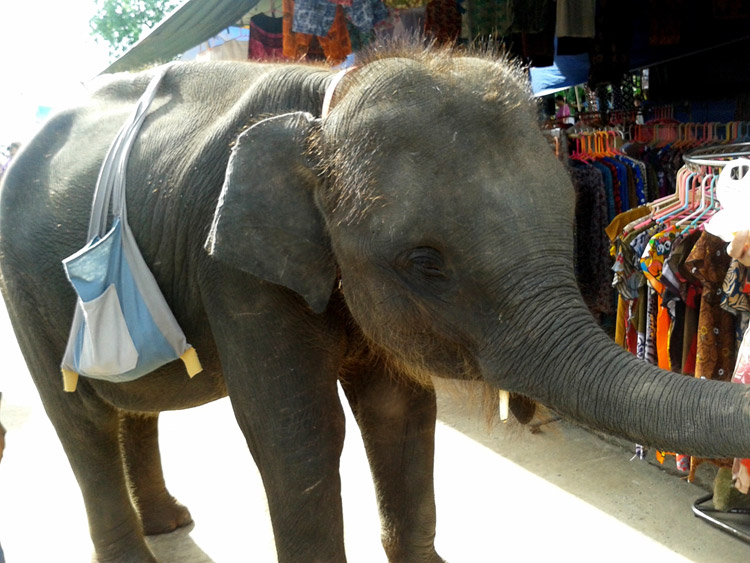 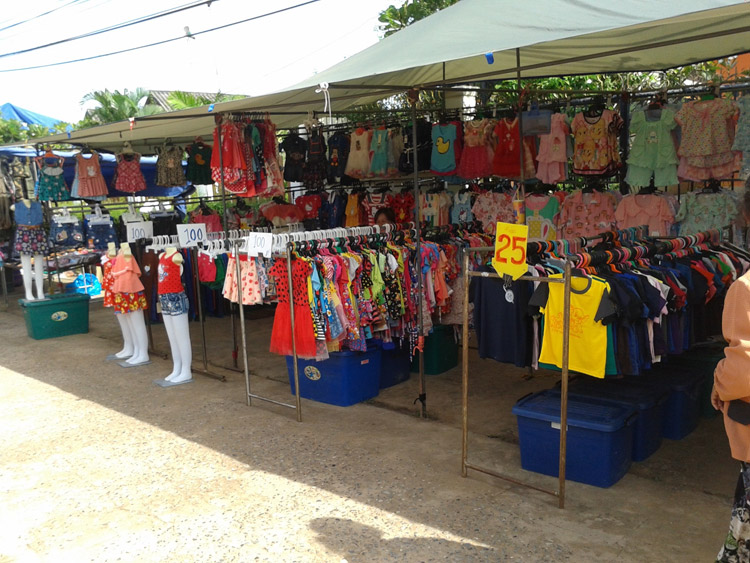 We then moved on to the regular market in which, as well as the usual stuff we’d all recognise, there is typical Isaan food for sale. I was hoping to find some frogs to photograph but they were absent this time, but I found a few other exotica to show you. I leave all that for the locals to consume. There were also turtles for sale, but not for eating. There is a Thai tradition which involves them being released into a pond, representing the giving of life. The morning was then rounded off by us following a lorry transporting a few cows as we returned home, and with my brother-in-law cutting the grass while dressed as a terrorist lookalike. 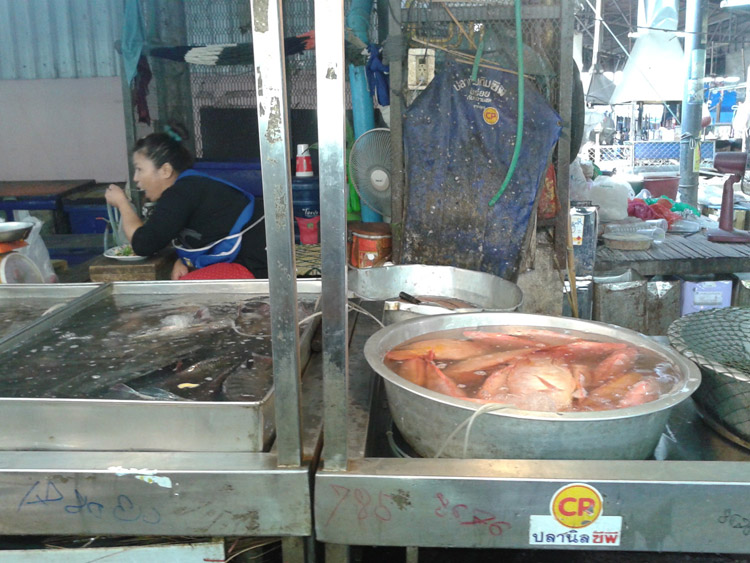 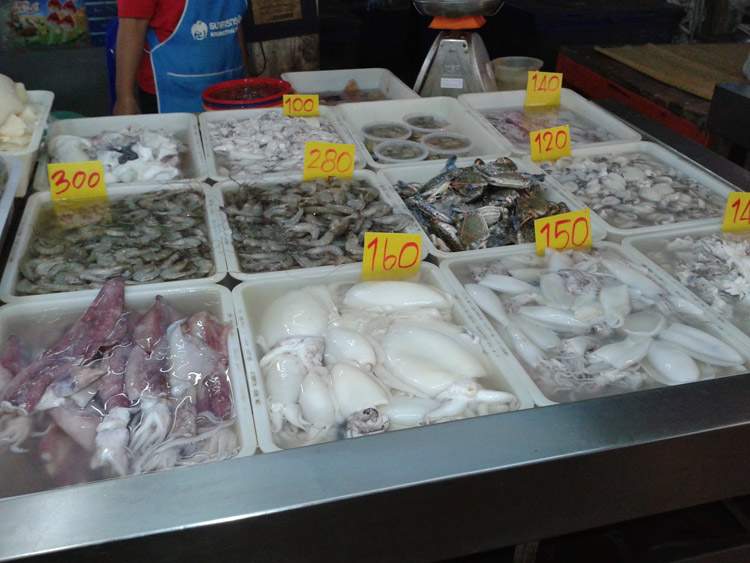 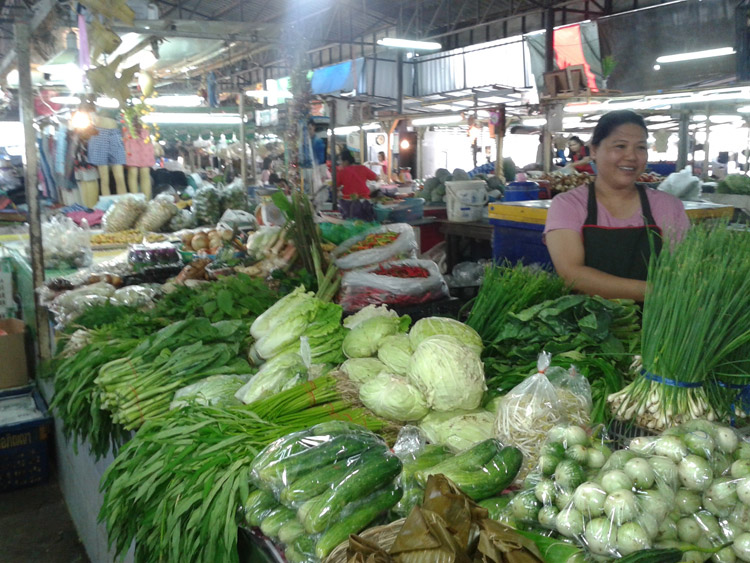 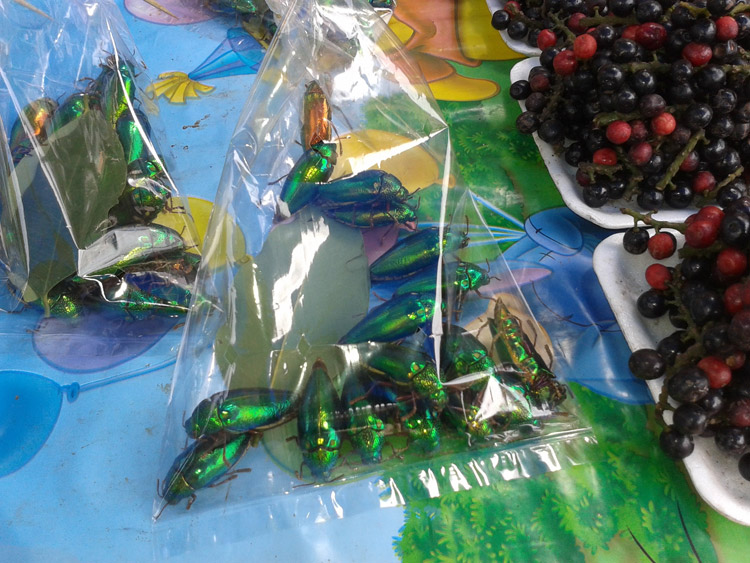 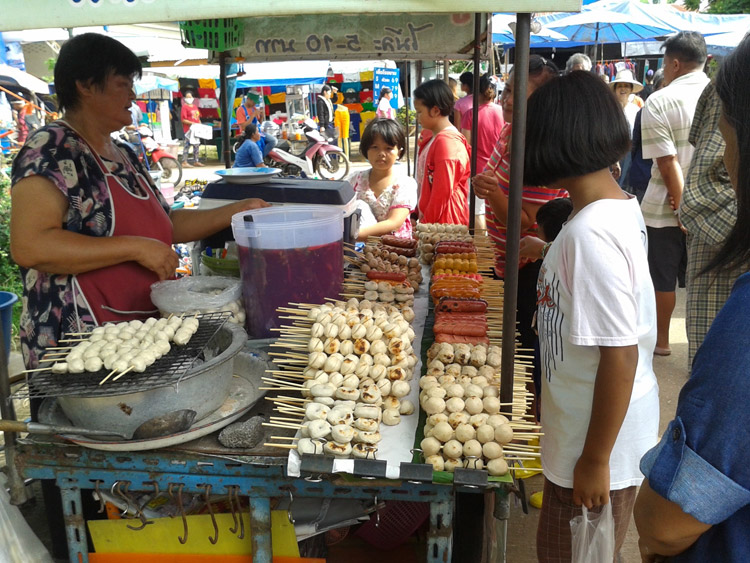 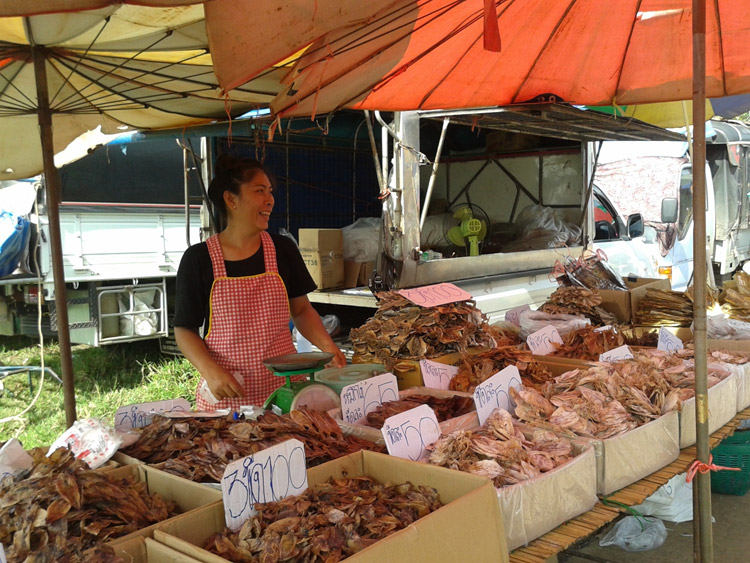 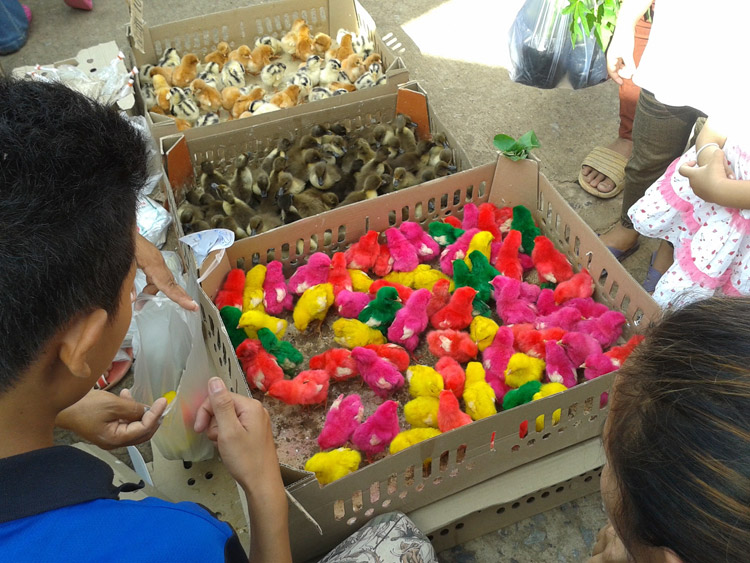 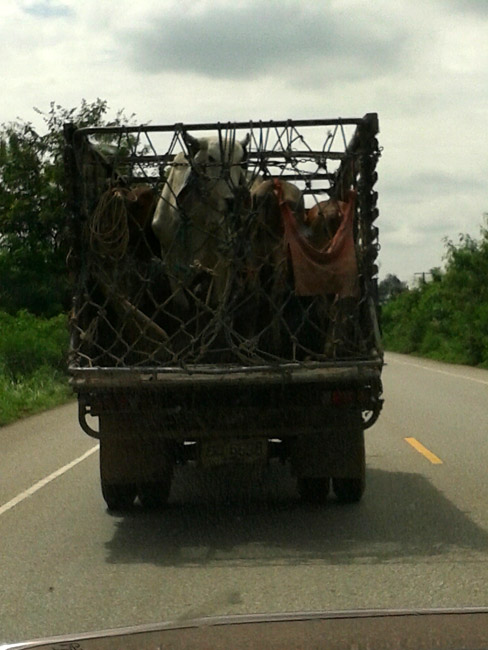 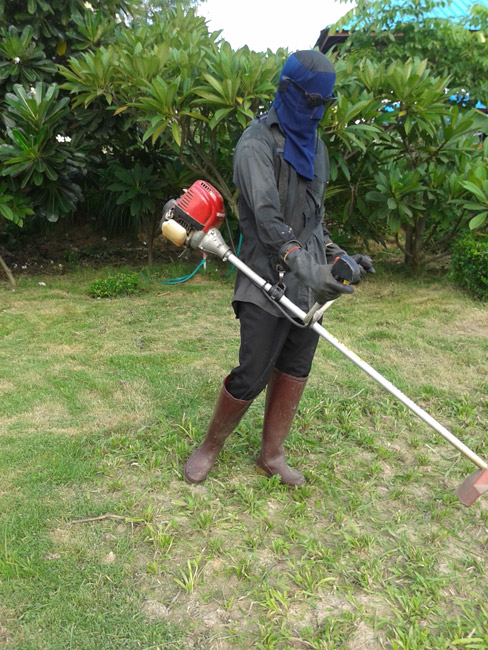 Things are different around here. But not dull.