Bangkok has fundamentally changed, and you are very aware that the change is both structural and irreversible. A couple of months ago you said that you were leaving the city in the near future, you posted a photo of Phnom Penh (a hint?). <A red herring – Stick>

Since that post you have been less passionate in your reporting, more functional in your detailing of the life of the city. I do not mean to be negative in any way – I love your site, and I read your posts every Sunday. I just feel that you have fallen out of love with Bangkok as the city has changed – and that's totally understandable.

I have never seen lower Sukhumvit as quiet as I saw it tonight (14th July 2014), I was here for the 2006 coup, the 2010 red shirt protest, the floods, and 'Shutdown Bangkok' earlier this year. However, I have never seen such clear sidewalks, empty bars and idle taxis as I did tonight. I have never seen the city so bereft of tourists as it is now. I can't believe that any bar from Cowboy to Nana is turning a profit, nor even breaking even. The lower Sukhumvit market is barely setting up before 6 PM, and even then it has only 30% of the stalls that used to set up. There are many bare spots between Asoke & Soi 1. There are no street beer bars anymore around the Soi Cowboy – Asoke junction. The bars in Cowboy were absolute deserts tonight, even Baccara was less than 25% full at 9 PM. 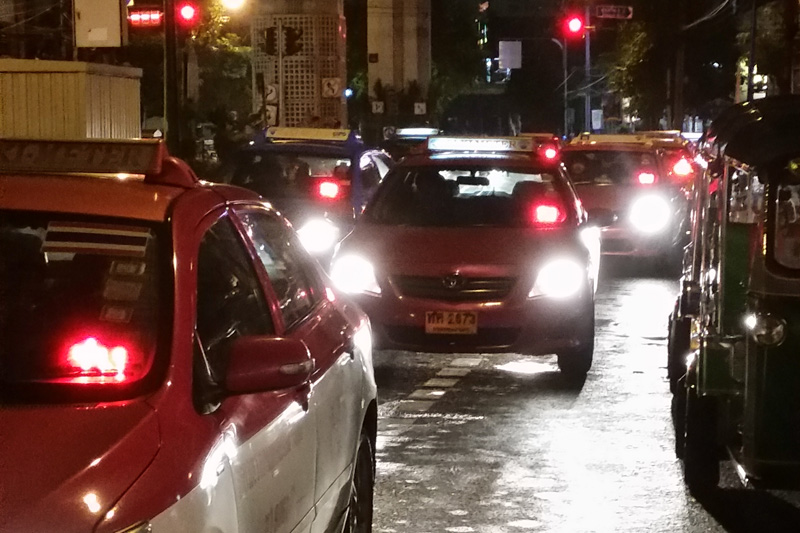 The photo shows only a portion of the many taxis lined up around Soi 7 at midnight, all showing red lights despite the rains! I could go on, but I suspect that you are more than aware of the drought during this rainy season.

However, it's not that there are no tourists, it's just that the tourist base has fundamentally changed, and will continue changing. The increase in the number of Chinese tourists is absolutely remarkable. According to a recent TAT report there was a 69% increase of Chinese tourists in 2013 alone – 4.7 million Chinese visited the country in 2013, and nearly 17 million from East Asia (Japan, South Korea, Malaysia, Indonesia etc) in comparison to only 6 million visitors from the whole of Europe. The tourist scene has fundamentally changed.

So, the sun sets on the western tourist scene in Bangkok. East Asians generally do tourism in a very different way to Westerners – they shop, eat in Chinese restaurants and take selfies, rather than drink and dance the night away (as Westerners do).

There are many gross overgeneralisations here, but anyone who has been around Asia for a few years will get the picture that I'm trying to paint. It's no longer a Western tourist game in Thailand. They just built a huge Central Festival Mall on Chaweng Beach Road in Samui. The bars have been knocked down for shopping malls because Chinese tourists shop when Westerners go to the bars.

I walked by the old grounds of the British Embassy in Ploenchit today which are now a very high end shopping mall. Nothing better represents the power shift from West to East than this branded edifice to nouveau riche Asian consumers.

I know that you know all of this. You're an old Bangkok hand like me. I guess I'm just saying that I recognise a certain resignation in your posts, and I understand where you're coming from. Whether a bar in Nana Plaza etc should offer slightly cheaper drinks for a slightly longer happy hour is neither here nor there, it's all irrelevant. Nana Plaza, Cowboy & Patpong will all be high end shopping malls / offices / condos within 10 years. Those bargirl days are gone. Don't believe me? Look at what happened in Singapore & Hong Kong over the last 30 years. I could detail the change in Hong King as I lived there for 8 years.

So what to do? (as I believe some say in New York). Personally, I like the new Bangkok. It's a place brimming full of possibilities. Despite the political situation this is a young society on the verge of becoming a world city. This place has grown up, just as I have. When I first arrived in 2004 I stayed on Soi 15, surrounded by wooden beer bars. I now stay on Soi Ruamrudee surrounded by Italian restaurants and French delis – Bangkok has become a global city.

I feel that you are on your way out of Bangkok, maybe a little jaded by the life here, maybe fearful of being further drawn into an ever dwindling and internecine western bar world. I thank you for the many wonderful posts that you have given us over the years, your insight has been both illuminating and very funny. I wish you luck in wherever you choose to go. If you do choose Phnom Penh I'm happy to give you some insights on that city. I've spent a lot of time there (Cali 2, The Cavern, The Heart, etc .

Thank you, and keep smiling!

My reasons for leaving Thailand are less about Thailand and more about me. You're right, Bangkok really is a world city nowadays, but with local markets demolished to make way for huge shopping malls it looks and feels more like other major cities everyday and while there are positives in that, there are negatives too. Bangkok feels less and less exotic.

Some people have suggested I might be heading for Cambodia. While I like Phnom Penh for short visits, moving there is not part of the plan.