Ishiro wrote an opinion piece and somewhat touched on the subject of living in isolation, also known as Thai village life. Where his conclusions go wrong is that people choosing to live or build a house in a remote place just sit there doing nothing and have no life whatsoever outside the small circle of family and friends.

I had town life for my first 26 years. The smaller town where I was born was built next to the sea so I miss the sea when I am in rural Thailand. That can be helped by a trip to Pattaya once or twice a year. Pattaya, despite its reputation, has some advantages. Quality food is cheaper than in Bangkok and I enjoy people watching or taking a stroll on beach road. Last time I walked from Mike's Mall to Jomtien and back every day. Up the hill and down. Good exercise since I tend to sit in front of a computer due to my work. A few days of Pattaya is enough for me. Last time I had a few coffees in front of popular bars to see what was going on and it was much the same as I remembered. Had a nice, affordable massage two times without any extras. I drink very seldom nowadays so everything looks a bit more tacky through sober eyes.

I need to travel regularly to Bangkok and next month I need to pay a longer visit to my home country. Probably I will combine it with smaller trips to two neighboring countries to meet some childhood friends that I have seen only in Facebook the last two or so years.

Well, back to the actual subject. Ishiro's preset parameters seem to be that if you are living in a Thai village you are living in isolation, are desperate for friends and suffer silently and finally go barking mad. 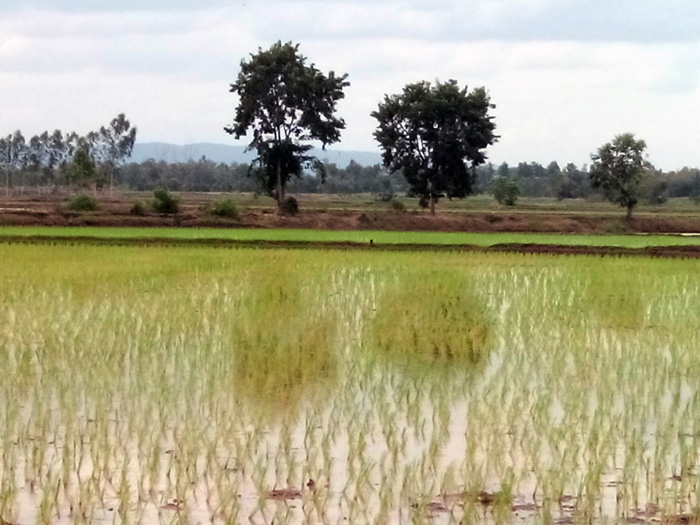 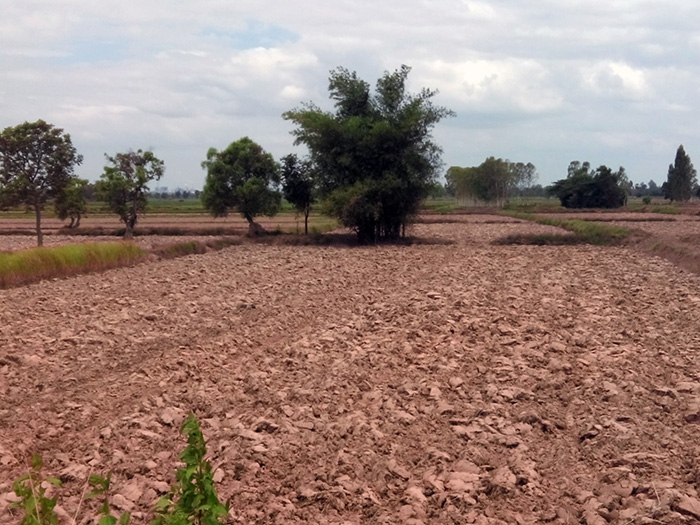 I myself welcome a quiet nice neighborhood and the fact that I have plenty of time to engage in my passion – which also is my work – makes me feel very relieved. My house sits on a large plot of land next to a good road with street lights. Even if occasionally music was played loud, it would not make much of an impact since it only can be heard as sort of background noise. That happens perhaps twice a year. A neighbours like to celebrate New Year and Songkran. He is a retired teacher with a nice English speaking family and I never had any trouble with them. Another neighbor is a couple of very old Thais who must be over 80 and if I wouldn't see them sometimes they might as well be dead, so little noise do they make.

If I could choose, a 600 square meter house in a nice neighborhood on a 5 rai garden in Bangkok would be my choice but I suspect that there are very few who can afford it. I certainly couldn't. So I have it in Isaan. And when it comes to air pollution, I have chronic asthma due to my working history. That has cured itself much during these years living in LOS. I am not sure, though what would happen if I had to inhale Bangkok fumes every day. Sometimes while visiting capital I need to rely on my inhalers – something that I have never needed to do in the sticks. So, in my case being outside the smog and traffic pollution is a health factor.

I also own a country house in my native country and a small condominium in main capital. In Thailand our family business has moved to Bangkok near to National Stadium so if I ever feel the urge there is a bedroom for me. So far my family wants me to come there more often than I oblige. Actually, I don't feel comfortable in Bangkok. While the air pollution issues might have improved somewhat, it still is very tiresome city to go around. Just try walking around Thai capital and you will have an idea what I am talking about. I say walking since I try to keep in shape and don't really enjoy the idea of having lung cancer or falling down a pot hole or being overrun by a lorry. Where I stay now is a wonderful park near a dam lake and it takes only 15 minutes to get there. The benefit is that there are no street dogs taking a bite out of you and they have several clean and functioning toilets if you feel the urge. For those who play golf, the course is next to the dam.

I do understand that there exists an image of Isaan Farang. He has come to this place being like Lord Buddha and expects to be worshipped. He likes his beer from early morning till dusk and maybe a few after the sun has set. He has not much money but what he's got he gives his darling wifey who spends it gambling and so on and so on.

I just say that people who have issue probably had them before coming to Thailand. The phenomena is not exclusive to Isaan. These desperate men are all over Thailand. They suddenly have found out their money is worth more here in the sticks. What they fail to realize is that it might be that someone decades younger doesn't love them, but loves their purchasing power. And when that almighty power has gone, so has everything else. I once got solid advice from an elderly Thai teacher. He said that if you have to pay for it, why involve your feelings with it? That was straight to the point.

While it might be possible that there are people drinking themselves to an early grave, I have seen quite a many that seem perfectly happy with their significant others. They also seem to fill their days with other things than gulping amber liquid for breakfast, lunch and dinner. I have heard them to travel around the globe and do shopping visits to faraway malls. They seem to play golf or engage in other sports or yachting. Myself, I like gardening. I used to do that in my teens during summers saving money for education. Here, unlike in many European countries, it is possible year around. 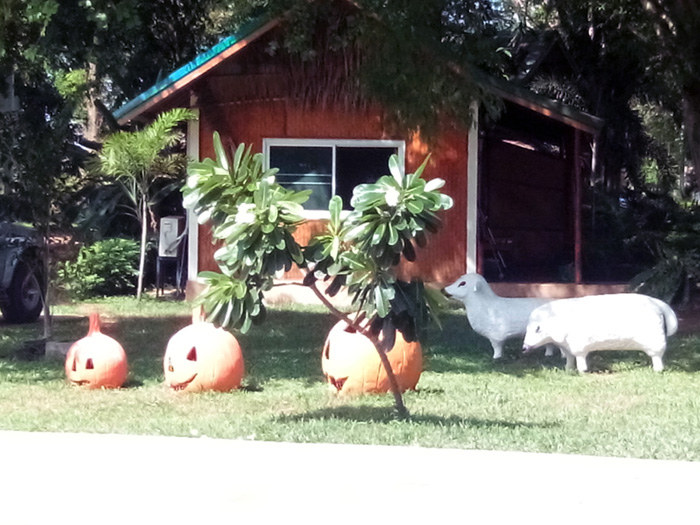 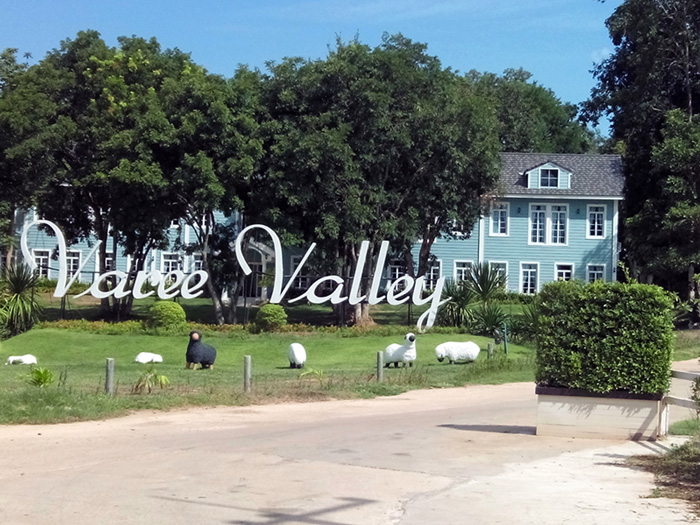 The world has become smaller and smaller due to internet. I have bought shoes, clothes, books and various other items and they have been delivered to my house here in Thailand. I find the service excellent even if a bit slow sometimes. The lady who drives the motorbike to deliver my parcels is not always willing to do it daily but rather waits for stuff to pile up before leaving for her round. Now we have made a deal and she gives me a call if I want to pick up my parcel direct from the post office.

Today I had internet calls to the other side of the globe. The Internet here has improved remarkably. I remember how slow it was and there were regular cut-offs sometimes taking a few days before the service resumed. I wonder if things are that much better in any European country if one is located on the countryside? I mean, I have a house in two countries that is outside the big cities and one needs a car to go around. When we compare the Thai countryside, is it really much different from any other geographical countryside?

When people complain about Isaan people being rude and predatory and unskilled and Buddha knows what…could it be possible that they have had a rough life? They are a bit predatory to be able to survive? That they don't know about mathematics or physics or geography or the latest trends in New York? But they might know a hell of a more about growing rice, taking care of water buffaloes and surviving when there is no money to buy food. All things that I know nothing or very little of myself. If I look my mother in law, she wakes up around 5 AM and starts preparing sticky rice and other Isaan delicacies. Then she proceeds to go somewhere to find and dig up bamboo shoots or some crabs or roots or whatever and after hacking them a bit has made some quite tasty dishes out of them. I actually like some of her food.

She has had a hard life. Her husband left her with small kids and she went to construction sites to carry ceramic tiles to workers. Her oldest son who was 12 at the time took care of the younger ones alone. She went back to village every month to give money and feed her children. Since she was at the bottom of the village pecking order, very little help or support was given. She only remembers two ladies that shared the little they had with her. When her life improved due to changed circumstances, these people who never gave anything when she needed it the most, paid a visit to her new house and asked why she didn't build any guest rooms for her “relatives”. She pointed towards the toilet and said, There's a guest room for you!

Why some people come here and expect people to be something else from what they are is beyond me. People who have had rough lives and have certain views – many times very realistic – about things going on, are in my view much the same as they would be in any other geographical location. Rough life breeds rough people. My Thai family has seen it all and somehow still survived as strong individuals and they are true survivors. If there is a problem, they will come for help. This applies to me too. They have helped me in many ways.

Isaan, as with many other parts of Thailand, is changing rapidly. In my area road construction seems never to stop and many roads are better than in my native country. There are shopping malls to the extent that makes me wonder if they are sustainable. I suppose this change scares some since they are no longer in a third world country where they were valued as walking ATMs but in a country where people soon might be better off than in Europe or USA. After that happens, who believes that we are needed or even wanted here? I don't.

We live the life that we choose to live. Choose wisely.

A Change for the Worse

More In Defence Of Bangkok