Banged Up Abroad, Air Crash Investigation, Relationship With A Bar Girl. Oh And A Massive Piece Of Ear Wax

Subject: Banged up abroad, Air crash investigation, Relationship with a bar girl. Oh and a massive piece of ear wax.

I first stumbled on this website about a year ago whilst researching a holiday to Thailand. I came across the bar girl stitch up stories and was gob smacked as I read one after the other almost identical scripts but with different names (although
not that different). Well I was addicted watching the proverbial train wreck just about to happen. You know you’re on to a good one when they say “she was different”. That’s when I punch the air run to the fridge grab
a beer and no I am going to be in for a classic!

I think it is with the same glum fascination that I watch that show Banged Up Abroad where, you know, the poor soul in the opening scene who is frolicking in the flesh pots of some exotic paradise light years away from his dire working class
town in about 30 minutes will be chained to a slimy wall in some South-Aast Asian hell hole or South American dungeon. Same script, same outcome, but I love it!

Same deal with Air Crash Investigation, but at least in that show sometimes there is a happy ending!

And as for the third subject in my title, relationships with bar girls I think we can tie that in with the Banged Up abroad scenario. It might not be a slimy wall you are chained to but you know what I’m on about.

That is not to say I don’t have empathy for the poor fellows pulled into the vortex of the bar girl relationship. They often seem to be genuine blokes who have lost the plot and know it, but insist on digging themselves deeper into
the mire of uncertainty or worse still going back in the ring for another swing.

This brings me to the last subject matter of my title, the large piece or pieces of ear wax. Armed with the wise teachings from this website I had a pleasant few days in Bangkok avoiding all the pitfalls befallen by many a punter unaware
of Stickman's rules of navigating the seductive bar scene.

So after spending a night in Samui I strolled out confidently to find a place to get a hair cut. I obviously had a special look appealing to the local girls as more than once I was told I was a hansum man. I found a barber off a
side street of Chaweng who gave me a jolly decent haircut, just before he whipped the towel off he peered into my aural cavities, tutted loudly and reached for a leather bag which he slowly unzipped ominously revealing an array of rusty medieval
torture devices! After a few moments of careful consideration he drew an evil looking pincer scissor looking contraption and heads towards me with a demented look on his face. Now most people say why didn’t you run or put up a stink. They
say fight or flight. Well I have a third option which is shit your pants and be too chicken shit to do anything and lie back and cop what’s coming to you. Unfortunately for me and unsurprisingly to those close to me I opted for the latter
course of action and lay in the barber’s chair quivering with fear as my tormentor approached maniacally waving the rusty pincer device and before I knew it he was into my right ear. Then it happened, whoosh bang roar and there was my tormentor
thrusting the pincer tool in my eyes with a blob of wax bigger than a 10 baht coin! Before I knew it he was into the other ear and repeated the procedure. Now my world was a nightmare, everything was too fxxxing loud! I asked my natural ear plugs
be returned to their rightful home but the beaming barber either didn’t understand or didn’t care as he eagerly showed off the waxy trophy to his friends and contemporaries. Well the proof is in the pudding so I have attached the
photos. May be Stick can relax the unwritten rule of not including photos of human excretions on his honourable website. 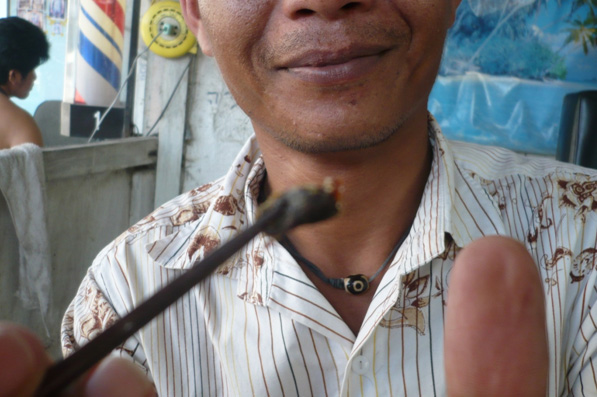