Musing About A Bit Of Everything Thai

I love to travel. It enhances our knowledge base of all things in this world. It brings new prospective to how we see them and broaden our mind in gaining new experiences and understandings.

Our recent two-month holidays were both eventful and quite beneficial. Somehow, I felt compel to share some of my travel experiences in random orders as they come to mind with our Stickman's community.

What will become of this Young Thai monk?

Around midway through our Asian trip, we were invited to a Thai monk initiation ceremony in Nongkhai. This young man is one of my wife's relatives and part of his growing up requires him by Thai culture to undergo a short period
of monkhood as symbol of respect to his parents and his religion. 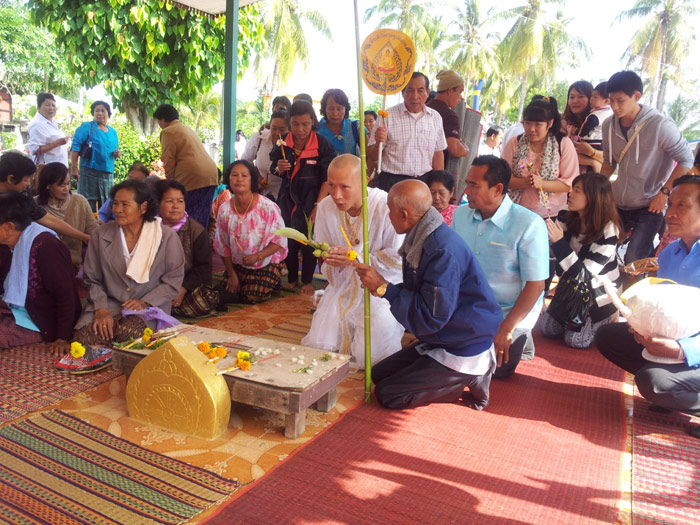 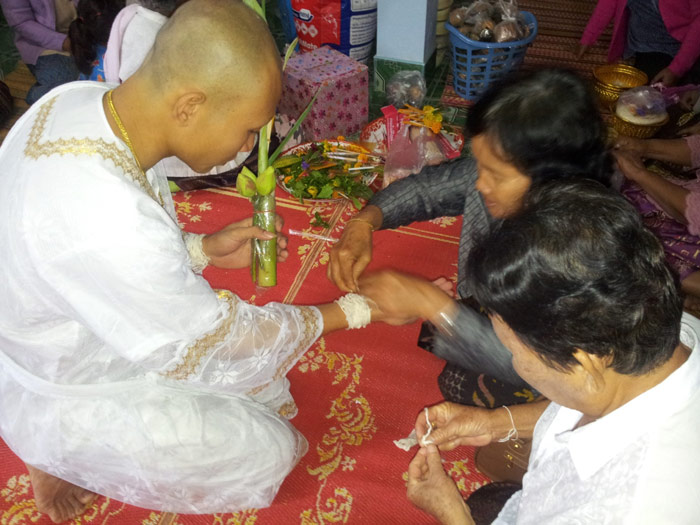 A short term for him to abstain from all things worldly in theory, but do they really?. Young monk will one day become an old monk. My father-in-law is now a very old monk with all the signs of human frailties linked to his old age. Many
years of Isolation and prolong deprivation of normality in life have taken a mental toll on him. He is going slightly "coco" and quite deluded and often made false accusations of certain relatives for things they did not do. No amount
of persuasions from my wife and her brothers can convince him to see a psychiatrist/specialist for test to his mental health.

Prior to this trip, and my visit to Chiang Khan near to Loei province. I was of the belief that monks eat poorly. Their diets are consisted of one meal of basic rice and meagre servings of fish or vegetables. I was totally mistaken and
extremely astounded to see the vast amount of good foods the monks were given in their "Alm" bowls each morning. So much so that they were overflowing and their bowls have to be emptied repeatedly into a separate containers for them
to accept more from the well wishers. 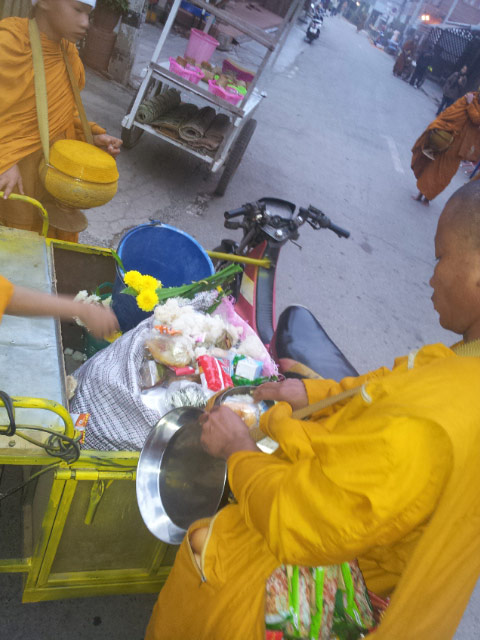 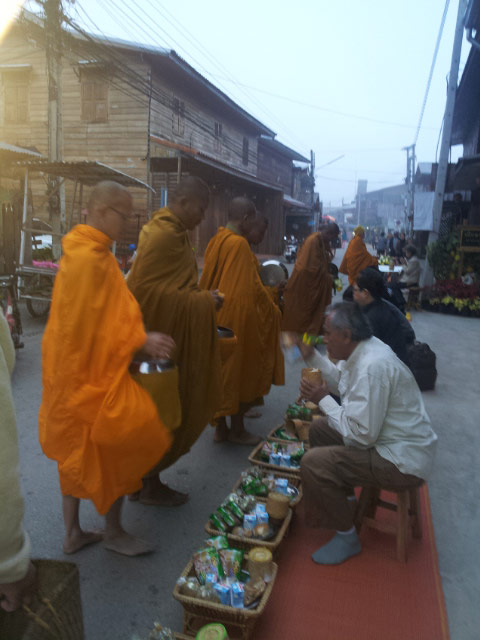 This type of generosity shown to the monks is overwhelming and excessive and down-right wasteful. It makes me thinks why they are so many no- hoper Thai youngsters. The answer is that the Thai society makes them that way. When things
get tough, they take an easy way out and become a monk and enjoy life of indolence with free handouts. Perhaps, I could go as far as reciting that well versed mantra with an add- on. This is often expressed by other Stickman's writers
on this site:" The bar girls take it from Farangs, no-hoper Thai boyfriends squandered it for them, Pa and Ma in the village siphoned the remittances off to give to the ungrateful monks. . . "

My wife is good to her family. With her father's failing health, she took it on herself to look after him as best she could while we were in Thailand. 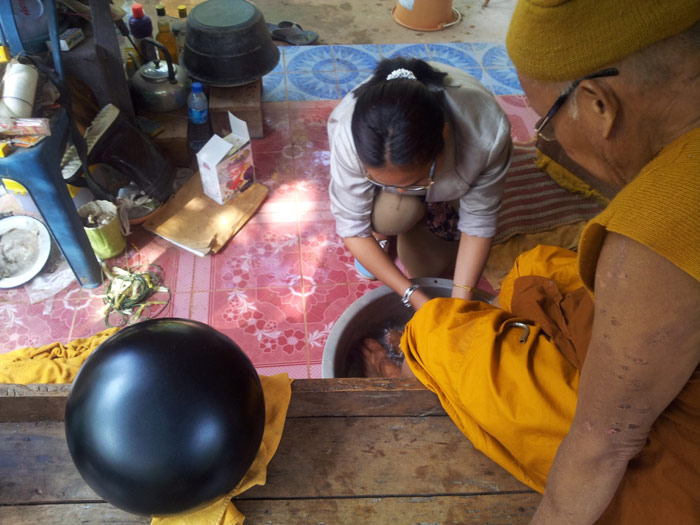 Many regular visits followed and few sitting ins with him at the temple to partake breakfast with him. Those visitations were quite boring for me and my kids refused to go knowing the boredom they needed to endure with grandpa monk. I
did what good son-in-law would do and went along with my wife to support her.

One noteworthy event was to do with my wife, who is a qualified Australian Registered Nurse, giving her father monk a massage and washing and dressing his self-inflicted sores on his feet and injecting liquid medicine for his scab on
his chin. The first time she massaged him, I noticed a glow in his eyes and I was also taken aback for her action. Later, I came to understand that daughter's touch for father who is a monk is an exception to the norm. This was really
quite special for me to witness for the first time an opposite gender touching a monk. It appeared as if the father-daughter bonding that had been broken for so long was then restored by her mere touch. I presume an enormous therapeutic/healing
value for him from his own daughter's touch besides just bonding. Subsequent requests from him to administer the same to him from my wife validated my line of thought.

You go to Japan via Loei, Thailand

Loei is a province in Essarn about two hours drive from Udon. I have been there previously but this time my wife and I went back for her reunion with her old nursing team from Mahidol University.

I enjoyed Loei, Thailand like I have never enjoyed Thailand before. I would rate Loei as one of the most amazing "unseens" Thailand. I really think Stick should make a trip there to journal it for his weekly report.

Firstly, there is this "Fuji" mountain in Loei which resembles the real thing. 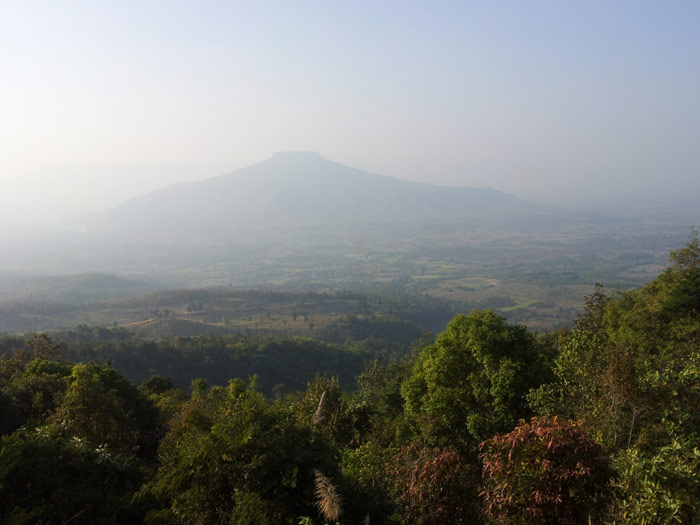 Then, you have an area somewhere inside a national park that is populated with "Sakura" or cherry blossoms to mimic the real Japanese Landscape in Spring. 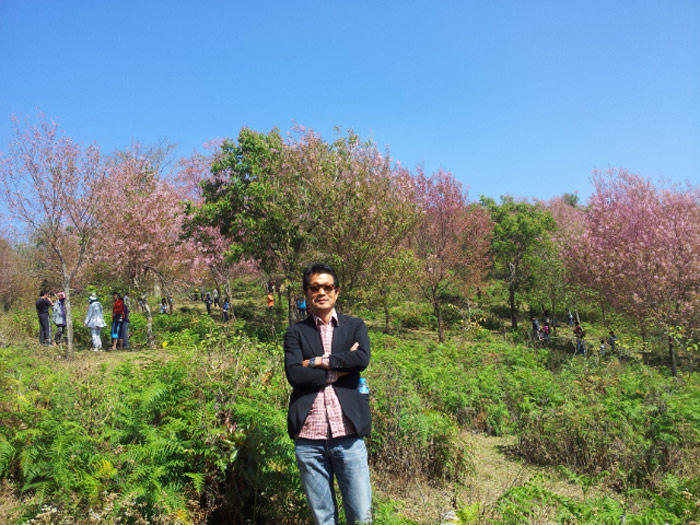 I was the privileged guest and was fully escorted to all these wonderful places. So, please do not blame me for not being able to tell you the where and how exactly you get to those places except to say you really can have a Clayton's
Japan when you are not having one.

So, you decided to be fully Thai-up, do you?

Perhaps, these are the ways to go about it.

First, you marry a Thai. Then, you learn her language and maybe her songs as well and live among her people to really understand the nuance of her cultures and social etiquettes.

If these are not enough, you can retrace her ancestral way of life and go totally "Ruen Thai". If she is really worth it, go ahead and built her a completely authentic "Ruen Thai" house like the one below. 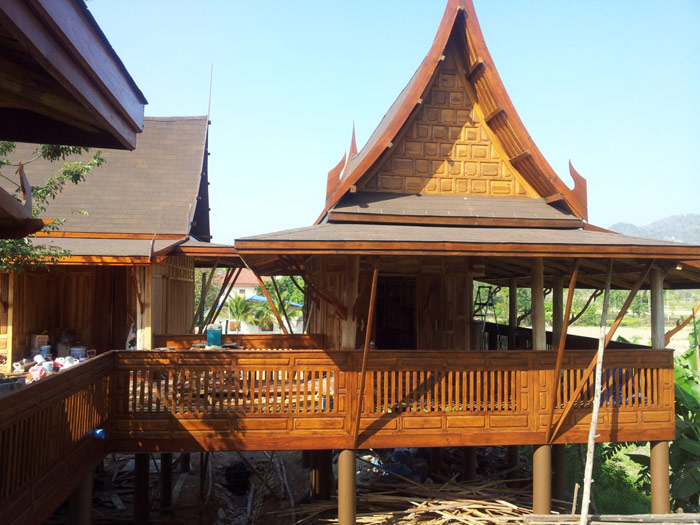 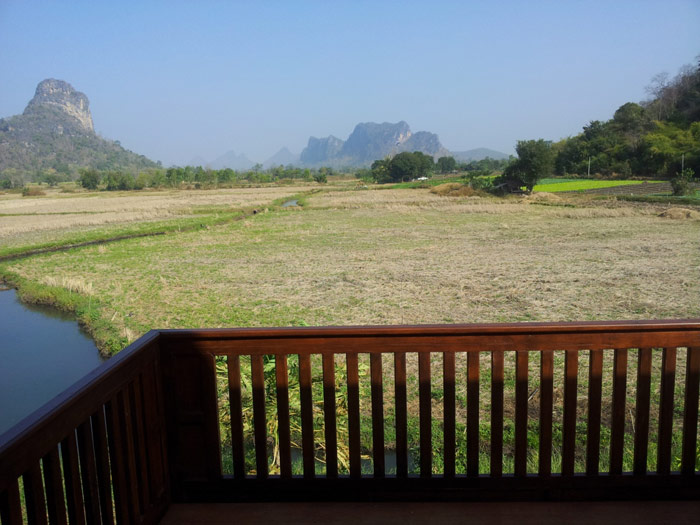 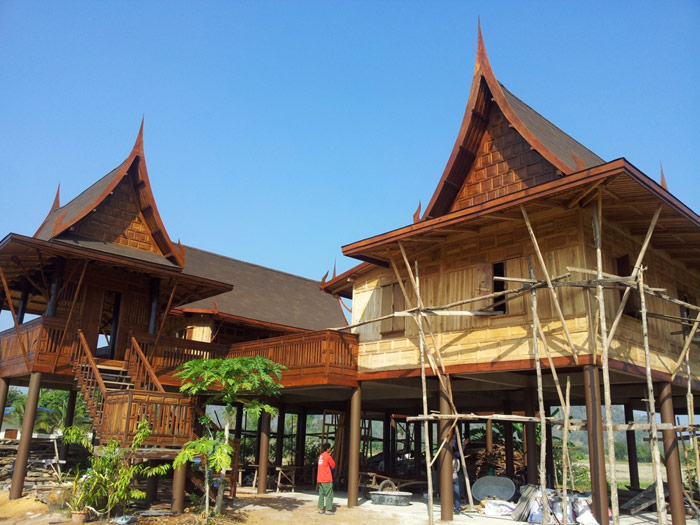 YOU be her KING and SHE your QUEEN and both live happily ever after.

Just a thought – nothing too serious.

Ride a bike in Koh Chang and DIE with a smile?

I prepared myself for our trip to Koh Chang. I watched several you- tube videos to mentally prepare but none could prepare me for the reality and dept of precariousness of riding/cruising the island in a bike. The road on the East side
of the Island is absolutely treacherous on dry days and deadly on raining seasons. 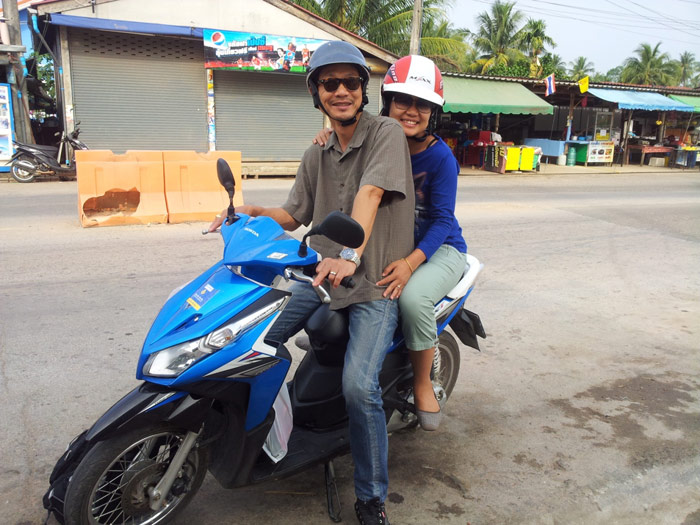 Beware of cheap rental bike. Your life and your passenger's life depend on it. It's BRAKE will save you, test it before you agreed to rent it. WHY?, because of several stretches of steep- narrow-winding-close- to- 70- degrees
-descending road and same gradient ascending. Then you go around several sections of the road at almost 90 degrees turn and numerous dangerous bitumen cracks, pot holes to throw you off balance as well. These dangers are scattered all along
the East coast of the Island.

Road dangers aside, Koh Chang is beautiful with Sandy White beach which really is a jewel for swimming. Snorkelling out in the bay was incredible. 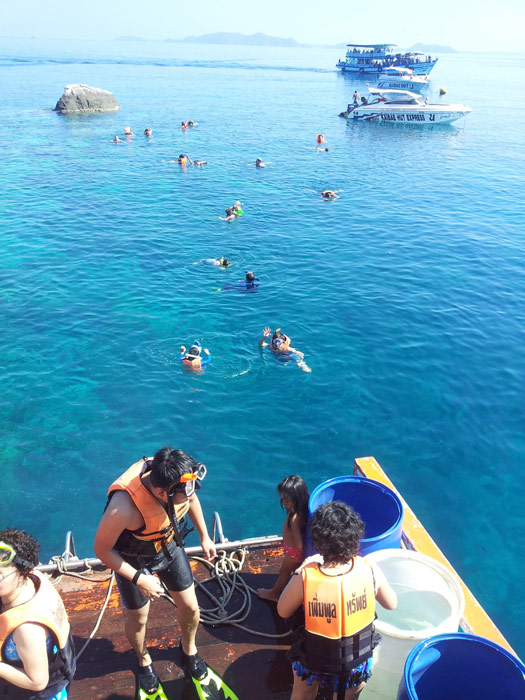 Riding on Chang(elephant) is an unique experience: slow and gracious. Kayaking, now, that is another first invigorating experience for me. Drop by a fishing village to buy live crabs and got them cooked for you and served to you with
condiment called "nam gin" for about 200 baht per kilo: NOW, that is priceless!

Prior to my Koh Chang trip. I really did not understanding what hair-raising feeling mean. I suggest to you, go ahead, live and let live because you are never too old to have an adventure even at my youthful 60 years of age. But if you
must risk living dangerously then try and take a trip to Koh Chang and cruise around the island on bike (PLEASE BE VERY CAREFUL) and survive to tell the tales to your kids and grand kids.

A Korean Perspective: Both Could Be Right