It's a cold mid-October in Germany and a few light snow flakes greet me on the way to the airport. Just a few hours later, I find myself watching the sun set on Sevilla's Rio Guadalquivir – at 24 degrees Celsius outside
temperature. I arrived here without a passport, without changing any money and without any scams and hassles.

And there comes Ana María. We haven't met personally before, but Ana María welcomes me with a charming smile and, Spanish style, with two pecks left and right.

I had clicked Ana María on a travelers' online forum and she had claimed it would be her "pleasure to show you a bit of my city". Right from the riverside, Ana Mariá guides me into several atmospheric Sevillan
barrios, including Triana, El Arenal and Santa Cruz – with ample stops of course for tapas (mini meals), tinto verano ("summer wine", red wine mixed with sweet Spanish tonic water on the rocks) and myriads of local specialties;
Ana María teaches me all about bocadillos, montaditos, serranitos and five kinds of sherries (fino, manzanilla, olorosso, amontillado and Pedro Ximenez).

Ana María seems just as lovely and lively as most other local people I see on the street and with that open, easing smile. All this is certainly addictive. I say I would like to meet her again.

She replies that next week she'll be mighty busy at her bank. But how about next Sunday afternoon?

Fine. But I have a suspicion. What is "afternoon" on a Spanish timetable? These people take lunch at 2.30 p.m. and dinner not before 9.30 in the night. 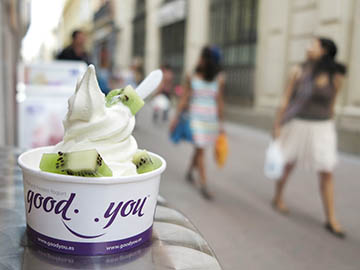 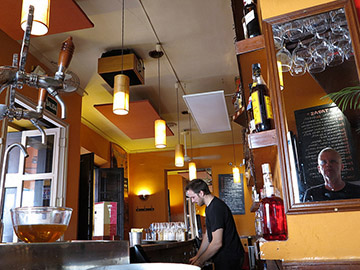 For some days I shift to the port city of Cadíz, roughly 150 kilometers south of Sevilla. I book the bus ticket online and, entering the bus, I see a sign, Wifi a Bordo.

So you have wifi on board, I ask the driver in Spanish?

And is it free?

In Cadiz's neighborhood-style Café Bar Ducal, on the plaza next to impressive Gran Teatro Falla, I take a typical Andalucían breakfast with olive-oil sprinkled toasted bread, tomato sauce, iberico ham carved freshly off
an impressive knuckle that occupies most of the bar counter, fresh orange juice and of course ample café con leche. Then I notice that my wallet is still in the hotel and not with me.

I have eaten everything and hold no money to pay for my meal: that would be a grave mistake in my home country. I check the dictionary and walk to the bar counter.

Sorry, I say in Spanish, I would like to pay, but I forgot my money at home.

The Spanish bar keeper bows, puts his right hand to his heart and says, No problemo, caballero, just come back to pay when you have the money.

A few days later, a hot afternoon on Cadiz's Plaza de las Flores. I discover one of those heladerias with at least 25 tempting ice-cream flavours, all seemingly handmade and decorated like serious artwork – a Prado of helado.
I order a cone with scoops of mango and pomegranate ice-cream. The girl wants to hand me the cone, and I sigh: again I forgot my money. This time I don't have to check the dictionary; I explain that I forgot my cash at home. What to do
now with that ice-cream waiting for me?

The girl shrugs and says: No problemo, caballero, just come back again later when you have the money, why, we're here till late. Unceremoniously, she drops the ice-cream into the trash bin.

In Cadíz, jazz bands play on the pavement, if only because the Musicafé El Pelicano's interior had just been washed away by the Mediterranean Sea. Still this city is less refined and has less alegría than Sevilla.
I certainly miss the Andalucían capital and honestly, I miss charming Sevillana Ana María. I board another wifi-enabled bus back to Andalucía's atmospheric main city. 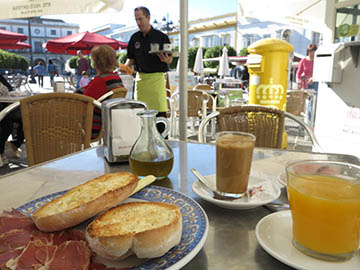 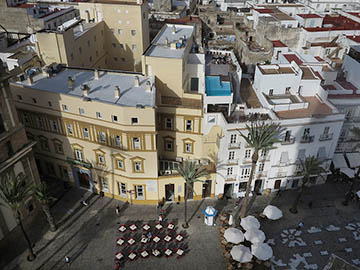 Sevilla: Ana María is there right on time, on our second date, on Sunday "afternoon" at 6 p.m. At a bus station she picks me up with her car and we drive to the edge of town to a nice park. By now, I walked every single
cobbled street of Sevilla's extensive old town, and every single narrow lane in Cadíz as well; but I have never been to either city's outskirts.

After a bit of walking I say: Funny, now we walked for over three minutes and haven't seen a café bar. Is that still Sevilla?

You know, I say, I find Sevilla really difficult: Sometimes I just want to get from the Cathedral to the Alcázar, from the Casa de Pilatos to the Museo de Baile Flamenco, or from the Hotel Alfonso XIII to the Archivo de las Indias
– but I never make it there, because there are so many café bars and tapas bars distracting me, it is impossible to proceed.

But after Sevilla, I continue, Cadìz troubled me just as much: I seriously want to make it to the famous Gaditano sites – the cathedral, the tower, the museums, the city beaches, the old town; but then all these musicafés,
café bars, restaurants, gastrobars, comedors keep getting in my way.

And Ana María cautions us not to snub the local yogurterias, the teterias (also called salon de te), the centros del interpretación del vino and the cervecerias.

Uh, this is one heck of a place, I sigh: Gorgeous food, wine and sherry flow, in perfect Old Europe ambience. How is one to admire a cathedral's interior when you can sit outside in front of it, on a historic Plaza de la Catedral,
shaded by palm trees, with a table full of exquisite tapas and finest local oenological products, at rockbottom prices?

Yes, that's Andalucía for you and me, smiles Ana María. She explains that her career has taken her to the US and to Argentina previously, but by now she is in no hurry to ever leave Sevilla again. And I can see her point.
We get along very well.

It's also such a friendly place, I rave: Even if I eat breakfast somewhere and forget my money, they don't get mad at me.

We Andalucíans are a friendly bunch, opines Ana. I agree whole-heartedly, even though I don't tell her who is the friendliest local in my perception.

Now around 10 p.m. the park gets slightly chilly. But our talk flows effortlessly, at least with the topics on hand.

As we take another well-lit path, I explain that I walk around in Sevilla or in Cadíz maybe just to reach the Baños Árabes; but then it's hot so I sit down for a summer wine on the rocks, I learnt it from you, Ana,
and it's very much local custom –

– but after the summer wine I feel a bit dizzy, so I need to re-focus with a tapa or two, say chicken en salsa or croquetas espinaces –

– you could also take solomillo al roquefort, suggests Ana María. And after that, you certainly want a caffe con leche. Even though if you walk on, the coffee and the sun might make you feel hot –

– exactly, I interrupt her, but there are all the places for handmade ice-cream deserving your attention, and there's the next café bar, so you try their summer wine, which makes you a bit tired again and you recharge
with a coffee cortado –

– oh, you've learnt about café cortado, applauds Ana María with a sweet approval in her voice that goes down nicely; of course the café cortado could make your tummy a bit nervous, so you might want to unwind
with a Sangría –

– I fully agree and mention that in the Sangría bars there is often the typical animated Andalucían bar crowd, spilling onto the street as if it was a living room, actually the pavement is their living room, because all
the narrow cobbled streets don't attract many cars, so I resort to people watching, and the show looks even better through a glass of pale blond fino sherry, or two –

– well I'd prefer a glass of manzanilla sherry, adds Ana, or two –

– whatever, it could even be an amontillado sherry, I concede, but anyway, you might remember from seven paragraphs further up that I had started the afternoon with the plan to visit the Baños Árabes –

– but now after these last sherries, Ana laughs, the place is about to close –

– correcto, I finish, so you can start to think about dinner there and then. 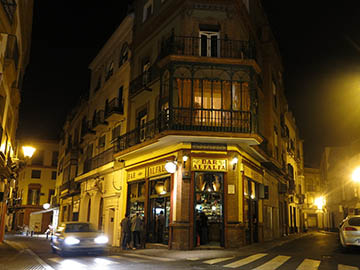 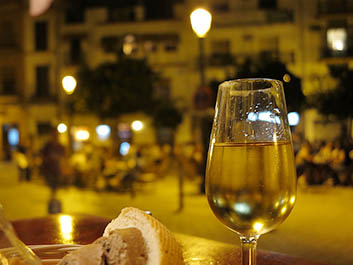 Now, at 10.30 p.m., I also think about Ana María's long working day tomorrow, actually she has her usual busy week ahead. I lead her back to the car park and ask her to drop me somewhere near my hotel.

This might well be our last encounter, because I will fly out on Wednesday.

In the car towards downtown, I want to share another Sevillan impression with Ana María. I relate that I had been quite excited to try various coffees here, in the heart of Al-Andalus, and that so far the coffees had been ok, but
not especially full of character and probably a bit too similar from café bar to café bar. Do they all serve the same coffees?

No, Ana María says: There are many different qualities of coffee around town.

But where is the best, I ask. Don't tell me to go to Starbucks.

No, Ana María protests as she steers us onto the main road towards Sevilla-Macarena: Starbucks coffee is completely bland – it's only for some foreign students who perhaps deem it fashionable.

Then, I ask, where to go for a good coffee? A five star hotel?

Ana María: No, not really. Let me think for a moment.

We pass one or two traffic lights.

Muy bueno, Ana María continues after the break, I know where to get the best coffee.

Well, she says, to be honest I think the best coffee you get in my apartment.

She sets the indicator and leaves the main road towards her residential area. 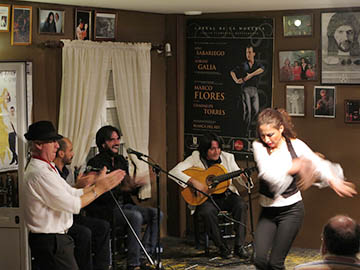 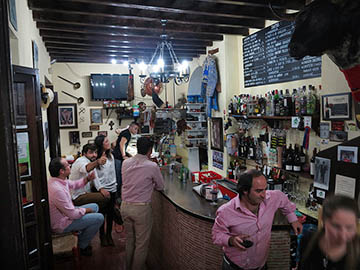 Very nice indeed – you do a great job of making us want to visit!

* To any readers asking what this has to do with Thailand, the answer is nothing! Some contributors, such as Hans, have been contributing submissions for so long that they are given latitude. On top of that, travelogues are a genre that are widely enjoyed and as such are always welcome even if they may not be Thailand-centric.

Why It’s Different This Time