“ It gets a lot easier to deal with life’s curveballs when you’re not hiding under layers of fat”. (Ali Vincent)

The rains have gone, the sun is up and I was off to the beach before breakfast. It was rough this morning. Big surf was crashing onto the beach which was littered with ‘flotsam and jetsam’; a real mess. All manner of rubbish had been washed up over the last five days of stormy weather. Why do people continue to abuse the beautiful environment we have been gifted by Mother Nature? Plastic and glass bottles, plastic and wooden crates, old fishing nets, soft drinks cans, plastic bags and bags of household rubbish. Even the latest newspapers, with the print a bit washed out so you can only read the headlines and enough driftwood to build a house litter the beach. Whatever happened to garbage bins and refuse collection services? I don’t suppose there will ever be enough of either or is it that people don’t know about them? Larry, my Hawaiian friend, tells me that most of this rubbish is dumped off the Indonesian coast and comes here on the tide. Whatever, it really is a big problem all over the world, damaging the eco-system and an eyesore when it lands. 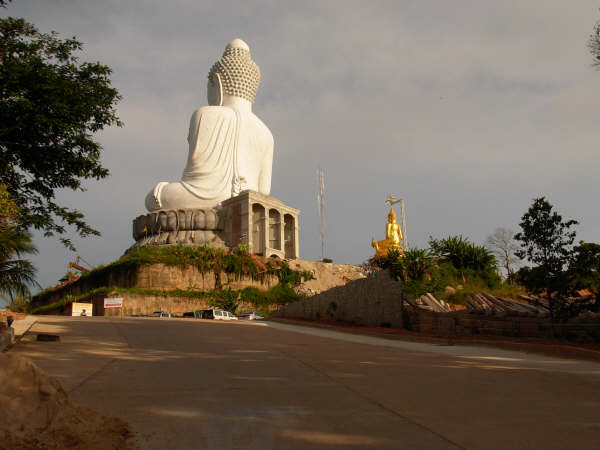 Sunday is a day of rest and this really was one. For the first time for ages I did absolutely nothing that I care to commit to paper. I really did ‘chill out’ as they say in the modern lingo.

As it is Sunday let me tell you about ‘Heaven on the hill’. High above Kata, Karon, Rawai and Chalong Bay sits the island’s Big Buddha. A forty five metre high concrete giant Buddha towers over the southern end of Phuket. The statue is the biggest in Thailand and Hong Kong’s famous bronze sitting Buddha is only thirty four metres high. The project is a long way from complete yet but it is an awesome sight from the ground by day and even more spectacular when illuminated at night, sat atop Nakkerd Hill. I think it’s called that because its 380 metres above sea level up a five kilometre winding trail. So by the time you get there you are!! From Chao Fa Road West, climbers find a serene spot. I haven’t been up there yet but apparently the views are sensational. Although primarily a Buddhist site for prayers and chanting, people from all over the world are coming in increasing numbers to enjoy the tranquillity and the peaceful surroundings. All the temples in Phuket have given support to the project and even Christians and Muslims have donated as well. The Buddha is already Phuket’s most important cultural attraction, second only to the beaches, the views are unsurpassed and it’s not surprising that it has captured the imagination of so many. There are approximately two hundred small monkeys living in the forest above Karon. I’m very pleased to hear this since much of the wildlife has disappeared since man started invading the Phuket natural habitat some thirty years ago. What is not so pleasing is that the owners of some of the roadside restaurants catch and keep monkeys on short leads to entice tourists into their establishments. 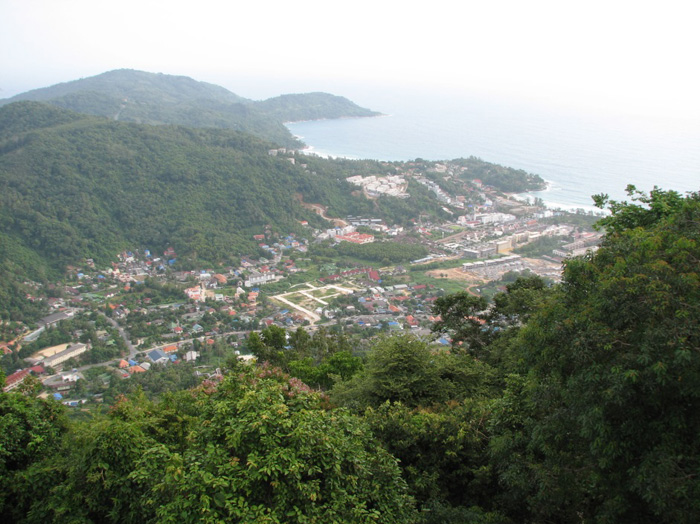 I am going out tonight to the After Beach bar on the hill; Bob Marley’s, I call it. After a week’s vacation the resident band, ‘The Wailers’, are back in full swing, but only after they are well smoked up on Ganja. One thing is for sure, out of season very few of the folks that are here bother to visit this open air rough and ready fun place. So you get all the attention you want, great service and food plus your very own live band. You can eat, drink, dance, chat or look out across the treetops to the sea and Kata Noi beach without annoying anyone else. It’s not cheap, just brilliant.

My back has been a bit sore for days and now it is really giving me some ‘jip’. The worst part is the lower left sacroiliac joint and around L5 but my shoulder and neck are sore too. I’ve been at the laptop a lot lately which could be part of the trouble. I have found an osteopath in Rawai who I could call. Garnett Symonds seems to be well known in these parts and I see that he wrote an article in the Phuket Gazette last week. There’s another closer to me but they never answer the ‘phone. Nin told me there is a ‘bone doctor’ near where she works. That sounded too much like ‘witch doctor’ so, in my ignorance, I dismissed it quietly.

Pueng made me eat a bean that tasted so bad I nearly threw up. Everyone except me thought it was highly amusing of course. Rather like a flat broad bean pod the bean inside is not dissimilar in shape and texture to a broad bean but that’s where the similarity ends. Once you have bitten into it you get this strong bitter taste that is quite revolting. Thais eat SA-TO (Parkia Speciosa), which according to Pueng is peculiar to the South of Thailand where as far as I am concerned it can stay, with their soups and other spicy foods. How anyone could eat something which tastes so disgusting is beyond me, but they do. I thanked Pueng graciously for another wonderful Thai experience but warned her to keep looking over her shoulder for a few days!

My back was getting sorer by the day so I had to find this guy. His card looked interesting and if he’s been practicing since 1994 he may have got it right by now. After all, Cracknell is an interesting name for a chiropractor. I know the qualifications but I’m not sure about P.T. but could hazard a guess! I biked around for a while until I found what seemed likely to be his place but there was no sign to confirm it, so I just took a chance and knocked.

A very athletic, but not handsome, looking man with long grey hair tied in a ponytail answered the door. He could have been any age between 45 and 65.

‘Do you have an appointment?’

‘That’s OK, come through, the nine o’clock appointment is not here yet.’

‘What seems to be the trouble? Oh, by the way my name is Richard.’

‘That’s good. I was wondering who you were. My name’s James.’

And guess what? Yes. Dr. Cracknell is the ‘bone doctor’ I so quickly dismissed.

He got me on the table in a flash, pummelling me like he was tenderising a tough old rump steak. I’ve been to a few chiropractors in my time, most of whom have treated me with kid gloves. But this guy knows his ‘onions’ and although I slid out of the door like a half set jelly I was sure he’d done a good job. He said he needed to see me on Friday morning at nine to ‘finish me off’ as he put it. During the session I discovered that Doc. Cracknell comes from Hawaii and is an avid surfer. No wonder he looked so fit. In fact he was off to Bali surfing with his 35 year old son and to celebrate the lad’s birthday. So that must put ‘Crackers’ at around sixty.