There is much talked about communications due to language barriers. It seems to me to be a distinct advantage in keeping things simple and not understanding one another’s languages fully means that you are forced to communicate on a simplistic level. It also forces you to use other senses other than speech or the written word. An expression, touch or look can convey so much. So, for me, it is both challenging and rewarding. I think that we can all overcomplicate our lives with too much intellectual or philosophical discussions, business and technical speak. We are constantly subjected to so much written and spoken verbiage that we forget that our very existence depends on whether we have sufficient nutritious food, water, a roof over our head and some medical care comfort. It’s good for me, at least, to be reminded of that from time to time.

Dim Sum for breakfast is becoming an alternative I may get to enjoy. A cup of hot Thai tea (Cha lon) consists of strong Thai tea mixed with carnation condensed milk and then watered down with hot herbal water (China tea). Malaysia has a similar brew called ‘Dayathali’ (my phonetic spelling) I am becoming quite partial to it even though it may not do wonders for my waistline. After some healthy morning exercise it’s down to work for most of the day.

I had a quiet day on the entertainment front and for a change nothing out of the ordinary happened but I must tell you about the flower sellers. Every evening without fail you will meet a group of about six local children selling garlands of flowers in the Kata Beach restaurants. The oldest girl is probably seven and the youngest no more than three. They work from around seven pm till ten pm and they are so cute it’s virtually impossible to resist buying something from them. I’ve actually given up for the moment. I can’t go home every night looking like an advert for Interflora!!! But shouldn’t they be in bed resting for school next day and not working for their parents at night? Yes, they should by western standards, but they aren’t western children.

A good example of what I have said about being good for the soul to be reminded of the real simplicity of life was brought home to me by Nin. She was sent to work in the rice fields at the age of twelve and considers it quite normal to kill a King Cobra herself as he may be as bold as to try and steal one of the family’s chickens.

Taking photos of the staff at Kata Lucky Villas is proving to be harder than expected. When it comes to photo shoots everyone seems to need time to prepare. I have tried explaining to them that I am not from FTV, Vogue or even one of the tabloids. That doesn’t matter. They need to make themselves look good so they feel good. God knows what they will all look like tomorrow. I just want some natural snaps. 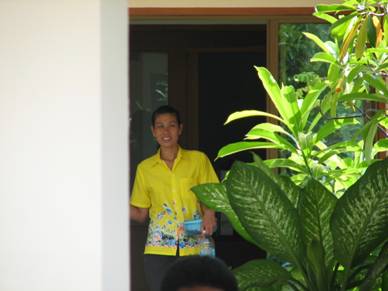 It may appear from my diary that business has taken a back seat recently. It just so happens that business activities, in general, outside of Bangkok are conducted by email or telephonically. Being desk bound does not make for particularly interesting reading, or writing for that matter. Therefore, I am trying to record more information relating to the environment and culture of Thailand, particularly from Phuket where I am based. In addition to that I want to recall what it is like to live here, not just as a visiting holiday-maker. Unfortunately I don’t have the time at my disposal for total integration as if I was a permanent resident. However, I can divorce myself from the tourist category, become a hybrid and observe most aspects of life here under the blazing sun.

Nok Krong Hua Juk is not something I’m familiar with at all but I found one today by accident. Biking it back from ‘7 eleven’ I heard quite a commotion down a little lane. So, inquisitive as I am, I took a turn left and found lots of motorbikes and cars parked next to a clearing between some small houses. There were probably about 200 people gathered in a circle and there was a lot of squawking and chirping going on in the middle.

My immediate thought was “This must be a cock fight or an auction!” I know that cock fighting is practised in Thailand so it wouldn’t have been a surprise and auctions are held all over the place. But no, according to my trusty source of information, it’s Nok Krong Hua Juk, a competition involving small birds with loud voices. I saw about a hundred small birds like finches, all in small wooden cages hanging from what would best be described as very large multi metal clothes line. On one side of the circle stood, or sat, the owners I believe and on the other the judges and runners (my terminology).

Amidst much shouting and arm waving the runners ran back and forth, as only runners can, sticking labels on the cages. I can only assume that as each bird is judged on its longevity of call they are sticking a ticket on the bird who wins that round. I didn’t see the end and I didn’t know what I was watching till much later. I had work to do and didn’t know how long the whole process would take anyway. I need to find out more.

Mia Noi With A Gun, Knife, And Connections