As my mother used to say; ‘Rabbits’. For some reason, and some of you may know because I don’t, on the first day of every month you must say ‘Rabbits’ before you utter another word. Of course it’s an old superstition
and I’ve no idea how or where it originated from. An early morning walk along Kata Noi beach led me to a tiny little shack amongst the rocks. It is set up like a small bar and they just sell water and soft drinks. Sitting at the bar
eating some rice and vegetables were a Thai man and woman; I would say in their thirties. They didn’t speak a word of English but they invited me to eat with them. Sharing food is a common occurrence everywhere in Thailand. I discovered
that they live right there on the beach under the trees. Every rock, tree and grain of sand was in pristine condition and I’m sure they did their housework early every morning before breakfast. I forgot to ask them how much the rent
was for such a simple existence. I bid them farewell and continued my walk followed by a swim and breakfast. 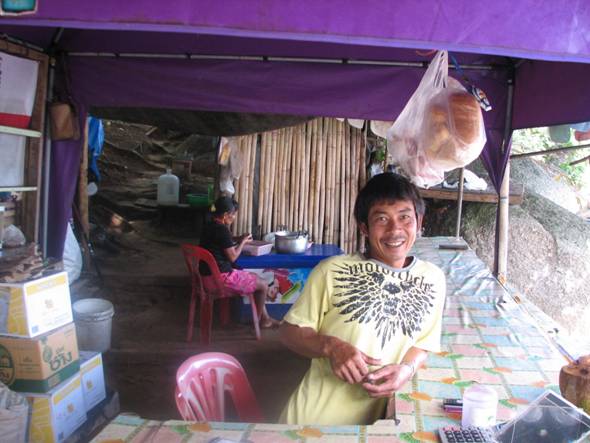 It’s supposed to be the rainy season but there hasn’t been a drop since I got back three days ago. They must have had one helluva lot while I was in Bangkok.

Kata Noi Beach is one of the most secluded spots on the island. There is only one way in and one way out. It can’t really be developed in the way the larger bays can but what has been done has been done tastefully and to a high
standard. This is not the South of France or the Italian Riviera but then neither is the cost of living. Condominiums here can set you back a fair bit in the smart areas like Kata Noi. Around ten million baht for two beds overlooking the bay
but one bedroom apartments nearby can cost around three million baht with pool, gym and covered parking.

The bay only spans a half kilometre of soft sand with a backdrop of tropical vegetation covering the high cliffs. I haven’t been here in season but I can’t imagine it will be crowded like some of the other places nearby.
Apart from a stray dog or two, they are all strays here, I was the only one on the beach so I consider it to be my private little paradise, for now anyway. Many of the most beautiful beaches in the world are found in Thailand and tourists
travel thousands of miles to enjoy the sun, tropical scenery, lifestyle, sand and surf. I’m lucky most of them won’t be here till I go. After the stress of Bangkok this is hard to top. But I have work to do. 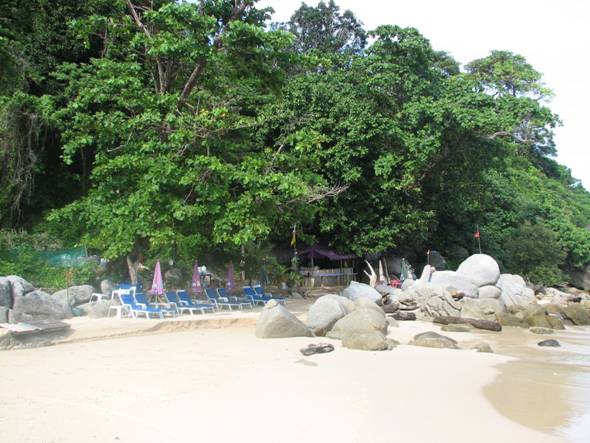 As evening approached and the sun was starting to slip below the horizon I enjoyed the most glorious display of oscillating colours in the sky. You just can’t live indoors here despite the very attentive mozzies but you often need
some respite, in an air-conditioned room, when the heat is turned right up between eleven am and four pm. You never have to worry (or is it wolly?) about being short of something to amuse you after dark. In that respect Thailand has few equals.
As I advance in years (I prefer that to ‘get older’) I enjoy more relaxed evenings to those of yesteryear when some of us were just a little crazy from time to time! Whether you like music, dancing, pubs, nightclubs, concerts,
lounges, karaoke bars or just restaurants it’s all here in abundance. Even Thailand hasn’t escaped McDonald’s and KFC much to my chagrin.

Wining and dining is a treat, from economical, delicious Thai food to culinary extravaganzas from all over the world, costing a great deal, and the choice is yours. Thailand is famous for award winning gourmet restaurants. Even Keith
Floyd, the international TV celebrity chef, has a restaurant close by in Patong; I must go and visit him. I used to frequent his early restaurants in Bristol back in the 1970’s. The Bistro in Clifton and the posher one in Oakfield Road.
He was very eccentric but, by jove, his food was jolly good. ‘Just another slurp’. But for me the real joy is to just get out and away from the hustle and bustle. You don’t have to go far to find a little thatch bar or
restaurant with great sunset views, wonderful fun atmosphere and at less than half the price.

I ride a while into the countryside and stop at the elephant compound. This is where they keep and train the elephants used for tourist treks through the forest. There must be about fifteen elephants here and I just stop long enough to chat to a few of
them and feed them a few bunches of bananas and leave a small donation. It’s amazing to watch an elephant make very short work of a bunch of, maybe, a dozen bananas. And they don’t even peel them! I think you only really appreciate
how massive they are when you are next to them.

Ok. This place looks fun and what a view through the trees to the sea and the sun setting. I was greeted by five girls/women; actually I think one of them was a ‘Lady boy’ and the most attractive of the lot. I could sense
there’s not much English spoken here so ‘Sawasdee kub. Sabaidee mai kub?’ gets me off to a good start.

‘Do you have wine?’ proved a little trickier but we got there in the end when the oldest of the bunch produced a massive 2.5 litre bottle of chilled red. Chilled red? You might well ask. It don’t see much point in
reading the label so I’ll just go for it, as they say. If I tell you it looked and tasted a bit like the fuel I used to light my paraffin lamp with forty years ago and the stuff the winos drink in the doorways of derelict buildings
I am sure you will understand. ‘I can’t believe I’m drinking this stuff; why am I getting so much attention?’ Oh! I think I get it. I’m probably the first customer they’ve had this week. With such
a fine wine cellar, I found that quite surprising! I was on my third glass as time seemed to have evaporated somewhat quicker than the wine. I put it down to me explaining to the girls that I had a stiff neck, and them wishing it was another
part of my anatomy. This was a pleasant new experience, being treated to, for want of a better description, a ‘Bar’ massage.

‘Sorry girls but I have to get this bike home; must go now’.

‘I wonder if I should give the bike a glass of that red stuff I just drank? Perhaps I’ll get home quicker.’

‘Will you come again?’

‘I’ll give it some thought!’

Thailand A Place Where Cultures Clash A Little