Continuing on from the painful episode at Honey’s Fresh Fruits I should explain that Thailand is littered with, for want of better terminology, ‘motor-bike shops’. This fascinating invention, which takes on many differing
customised personas, is either driven each day to a regular site, on some pavement in Bangkok, or in Phuket, or it may be driven around the streets touting for customers. You can buy almost any freshly made fast and cheap food you desire from
the vendors who will cook on the spot while you wait. One thing to remember though is that they are mobile and while you may not be used to being knocked down by a shop it is quite common in Thailand. It is also quite disconcerting if you
find a favourite bike/shop you frequent which has suddenly disappeared and then you see it further down the ‘soi’ involved in an accident. While the driver/shopkeeper is lying on the ground surrounded by an assortment of pineapples,
mangos and coconuts, and his shop has been reduced to a pile of scrap metal and splintered Perspex please don’t run after him asking if he has any bananas today. 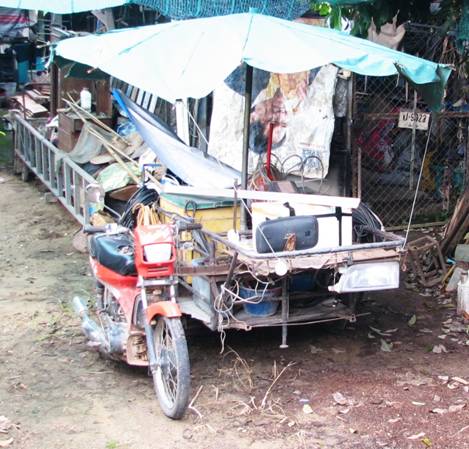 THIS ONE WAS IN FOR REFURBISHMENT

‘That was a good meeting. My foot feels a bit easier today. I think I’ll walk ‘cause I need the air? I mean, I need air. Hang on; this is not the right way back to the hotel surely. I think I know where I am but I’m
not 100% sure.’

Main roads or sois the noise can be deafening; with traffic overhead and at ground level. I found myself in a sort of market area. Actually every area is a market area in Bangkok. I always thought that pavements were for pedestrians and
roads were for traffic but in Bangkok it seems they are just additional space for vendors to peddle their wares. In effect you have two types of shop; inside and outside. There really is hardly any room for walkers on main road pavements or
sois and in sois even the cars and bikes have stiff competition for space.

‘There’s obviously a paint shortage in Thailand. Now there’s an idea for a new business. If anything has been painted in the last hundred years I would be amazed. If it has I will definitely spot it. There don’t
seem to be many tables with more than three legs here that I can see. That’s clever; a few bricks and that hole in the wall for the fourth leg; clever buggers how ingenious; and nobody gives a shit.’

Picking my way between tables and pots of boiling or frying food, ‘that smells good’, I must have looked every inch out of place as the rats, as big as cats (small cats admittedly), scurry into any hole they can find. They
are probably scared of ‘Farangs’.

‘I haven’t come across a health inspector yet! Strange. No window cleaners either; there’s another business opportunity.’ Finally, using Pigeon Pigeon and some inventive sign language I managed to get general
directions back to Silom Road.

‘Well well, that was interesting. Not sure if interesting is an appropriate word but it’s all I can think of right now.’

The owner of the factory is Chinese and, although courteous, didn’t have time for pleasantries or small talk. He was clearly rushed about something and might have appeared rude to some. He quickly passed me over to a young man
called ‘Aee’ who, he said, because he is younger, will understand the high tech stuff. He didn’t say, younger than who and little did he know that I had about as much knowledge of the high tech stuff as he did. I wasn’t
about to let on though.

Skype was still causing problems which appeared to be at the Cape Town end so I would have to let the clever ones there sort it out. Carrier pigeons were the answer till they all got shot. A cappuccino and a muffin later at Starbucks
and I still don’t know how they built that brand so big; it’s second rate for me; not even a pleasant environment; tatty shop. OK, I know what you’re thinking. Why does he go then? Convenience only and lack of adjacent
alternatives.

My next meeting was soon and not too far by taxi. By the way when I say, not too far I mean distance wise not time. The two have no correlation in Bangkok. That was a very good meeting with Terry whose real name is Teerapong Ponsirimongkol.
I wonder why everyone just calls him Terry? Imagine the hassles with that one. I have enough trouble explaining how to spell James over the telephone in Africa. But it’s normal for Thais as everyone has a very short nickname, usually
three or four letters, because the real names are so long.

Now my working day was done. ‘I think I deserve a drink and some good food.’ That, I would get at Silom Village whilst watching the traditional Thai dancing again and listening to the local band of musicians. To me they
sounded more like a rubber band which is near to breaking. Paul asked. ‘Did they go Twaaaaaang?’ I think it’s time for bed.

The State of the Thai Economy and Tourism