I had my first negative response today despite a very cordial meeting with a small, quality manufacturer, run by a husband and wife team, employing about sixty people. I found it interesting that they only export, have no local business
and the only marketing they do is twice a year as exhibitors at the Bangkok Gems and Jewellery Fairs in March and September at Meuang Thong Thani. They have no website and no catalogues; buyers have to find them and they are full up to capacity.
The factory was buzzing, they are not interested in growing their business and are most fortunate, indeed, to have more business than they can handle. They actually have no interest in manufacturing for us so I’m not quite sure why
I am here! But they are decent people and I learnt something of importance; not everyone has been affected or is despondent about the world economy. The first question I must ask in future is ‘Do you want more business?’

They say every picture tells a story but unfortunately I don’t have all the pictures and it would be impossible to recount my experiences of today without writing a tome; so I will try and précis as best I can. My second task
of the day was to get to a new manufacturer’s showroom, if you can call it that. It proved to be somewhat difficult as I was about to discover, when the taxi driver dumped me, unceremoniously, in the vicinity of the factory. Only then
did I find out that they had moved premises. Successful animated sign language negotiations ensured that I got directions to their new place of business. Thais will always give you directions but often they are not the right ones. As I set
off, hopefully walking in the right direction, I soon found myself amongst what seemed like millions of people, street vendors stalls, dogs, motorbikes, you name it, and all with the sun blazing down at 35°c in the minimal shade. After
much cajoling and squeezing more directions out of another three people I finally made it to the showroom and met my contact’s husband. But I still had to find his wife and the factory.

I took advantage of being at the showroom; after I finished looking at product I went out into the street and hailed a taxi which took me to the factory to meet the owner of the business, at last. The taxi driver seemed far more interested
in taking me to a “ping pong” show rather than my prescribed destination. If you don’t know what a ‘ping pong’ show is you will have to ask around as, I am sorry to say, I am not licenced to publish licentious
material. There was much haggling over the fare and I managed to get 50% off after he had probably put 150% on. But, then, he must have known his diesel usage was going to be high, because he didn’t have a clue where he was supposed
to be taking me. Although, bless his cotton socks, he did drop me off close by; a distinctly seedy area of Bangkok which made the hairs on the back of my neck stand up despite the stifling humidity and rising temperature.

Abandoned and leaking like a rusty faucet, from ancient Roman baths, I eventually found a gateman who phoned the number for me. He got the directions which he relayed to the motorbike taxi rider he was chatting to when we met. I climbed
onto the pillion of his clapped out Honda Wave and we took off, winding our way through some very narrow and best described as dodgy back streets. I am sure you can picture the Chairman of a well-respected overseas company, hurtling through
the sois of Bangkok, hair blowing in the wind, hanging on for dear life, with his laptop round his neck and wondering if this could be THE END!!!!!!!! 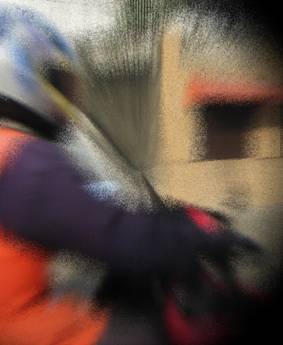 My driver skilfully managed to avoid slaughtering any of the hordes of scavenging dogs before the factory appeared before us; a cross between a dilapidated Chinese laundry and a public toilet in Agadir, which I once visited but couldn’t
utilise even though I was desperate. I am sure you know what I mean; when the stench is so nauseating and the hygienic condition is so icky, that your arsehole slams so tightly shut you never expect it to open again. Anyway, the workers seemed
cheerful enough and the owner, well she was so absolutely charming I quickly forgot the ordeal I had just been through getting to meet her. I was soon brought back to earth with a bang after another hair raising taxi motor bike ride back to
the main road. Then a car taxi brought me back to the safety and sanctuary of my hotel room where I lapsed into a convalescent stupor.

Despite my ordeal I made significant inroads into the possibility of getting the product we needed to expand our offerings to retailers considerably. I must tell you that I am the only visitor from South Africa they have ever had!!! I’m
not bloody surprised. I don’t expect anyone else could find them!!!!!!!

There are so many places to eat in the sois off Silom Road; an unbelievable variety of foods and delicacies all liberally sprinkled with carbon monoxide fumes and road dust! ‘Those are some very interesting looking food stalls
on the other side of the road.’ My mouth is salivating now having starved all day and my eyes have zoomed in and are fixed straight ahead as I cross the soi but fail to see a nasty crater below my eye line.

‘Oh s/?>, b)(()#ks’ and a few other choice expletives reverberate around the walls of the soi; carried on the massive expulsion of air from my lungs as I hurtle towards either Mustapha’s Egyptian Foods or Honey’s
Fresh Fruits. The choice, not a culinary one, must be made in a flash for I know that I could either end up as a skewered kebab or a fruit cocktail. Time refused to wait for the brain engagement but luckily I hit Honey’s stall as she
had just sold out of fresh pineapple. After Honey scraped me up from the pavement I plunged my aching foot into a bucket of ice which had previously been used to cool the pineapple. Once the shock had subsided I thanked the amateur paramedics
who kindly assisted me and I hobbled off to the Starbucks Trauma Unit to recover. The coffee was so bad I nearly forgot how my foot hurt so. ‘How on earth have they made a fortune out of selling second rate coffee at premium prices?’
‘The answer must lie in the art of the con.’ ‘Have you noticed that I am still conversing with myself?’ Just like being married again!

Walking anywhere in Bangkok is a hazardous experience and I now know why everyone has their heads bowed; not in prayer as I previously thought. But then you have to be careful you don’t walk into a lamp post! Pedestrian safety
is not a consideration as the walkways are death traps. Their condition, everywhere, is appalling. Walkers play ‘Russian roulette’ with the traffic all day and night and the traffic never seems to win. The ‘zebra’
crossings without lights mean your timing has to be pretty good but when there is a break the traffic will stop for you but you have to make the first move which is a little scary. I really still can’t believe I haven’t seen
even a minor accident. Yet!

I don’t think I can’t write much more about this day as I am now confined to barracks with my foot in a sling and feeling a bit ‘woozy’. Do you remember that excellent movie with Brad Pitt called ‘Seven
years in Tibet’? Well I’m thinking of making one called ‘One week in Bangkok’ because I’ve aged seven years already.

Prostitution in Thailand: News from the Formicary – There are NO prostitutes in Thailand

If It Quacks, Sure It’s A Duck!