I was feeling a little more relaxed again this morning. Glued to my desk since early I Skyped Paul and Kevin at seven am for them; twelve noon for me. Reception was a bit messy and we lost Kevin a few times. It’s a bit annoying
when you are rabbiting on about something important only to find there is nobody listening. Then you have to start all over again.

I’m not one for shopping but, for those who are, Thailand must be heaven on earth. You can find everything you could ever need. Even I have a bit of fun on the odd occasion. You need to know where to shop and how to bargain. It’s
not like Morocco, if you’ve ever been. There they chase you down the street and pester you until finally, just to get rid of them, you buy something you didn’t want, like a camel’s toenail, for a tenth of what they were
asking to start with.

I don’t bother much on the island but in Bangkok I am fortunate to have a few friends who take me to the right places so I can shop like a Thai and not a tourist. Unfortunately there’s always one price for locals and one
for tourists. Unfair or not, I suppose that’s universal.

Health tourism is booming in Thailand to the extent that there are organized tours from Korea and Japan. Thailand has one of the best medical services in Asia with Government and Privately run hospitals giving, generally, excellent service.
Dentists are among the best in the world and are not expensive in comparison to most countries. Cosmetic surgery is apparently very popular here also. Unlike many developing economies Thailand is attractive to foreign investors because it
encourages free enterprise and has a good infrastructure. The Government officially encourages foreign investment and has done so for many years. Thai bureaucracy there is but it’s not so bad that you can’t handle it.

For the tourist who just loves to travel, Thailand is an excellent base to discover the diverse cultures of Asia. The centre of Southeast Asia you can easily get to Myanmar, Laos, Cambodia, Singapore and Malaysia by road or rail. Vietnam
and Indonesia are a little farther but no more than a couple of hours by air. India, China, Nepal and Japan are all within a few hours of Bangkok. 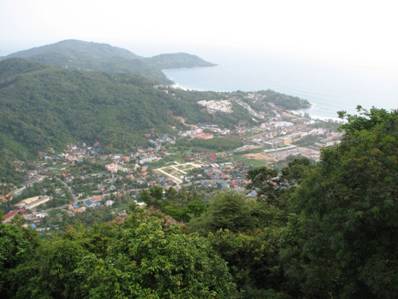 KATA BEACH AND THE HILLS

The air is like molasses today but I would like to go out at some time. Riding the Honda Click is pleasant with the wind cooling you but the roads are not so clever and you really need to be careful. There are many accidents involving
tourists, who think they can fly with a few Singha beers inside them, during the high season but its ok at the moment apart from the potholes. Nin and I biked it to Nai Harn beach over the hills and through the lanes. It really is a lovely
little journey which takes about thirty five minutes from Kata. On the way we met a few elephants strolling along the road with their minders and then a gibbon wandered into the path of an oncoming bus and decided to sit like a political protester,
in the middle of the road, refusing to budge. I later found out that his name was Charlie and that he and his wife Lam Yai are local celebrities who visit the bar at the elephant trekking station most days around 4pm. Charlie sits with the
people while they are having a drink and sometimes steals a drink for himself. He’s very partial to Sprite but it isn’t good for him. 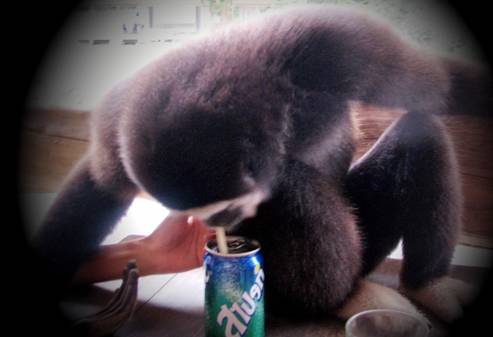 It was quite late when we got there and the sun was going down in the bay. That reminds me of Spike Jones and the City Slickers and his wonderful rendition of Hawaiian War Chant which starts:

‘As the sun pulls away from the shore and our boats sink slowly in the West, we hear in the background the music of Spike Jones and his Wacky Wackakaiians…’

I’d love to have met him. What a wonderful setting it is there under the trees, a waiter was somewhere in the bushes if required as we ate papaya salad, a few nibbles and a couple of beer Sing. But there was the journey back in
the dark. ‘Please be very careful James.’ Stopping off at the Viewpoint just above the ‘After Beach Bar’ restaurant we visited yesterday the view from high above the bay was breath-taking. The stillest and clearest
moonlit night imaginable captured small anchored fishing boats bobbing in the shimmering sea below us. I really didn’t want to leave. 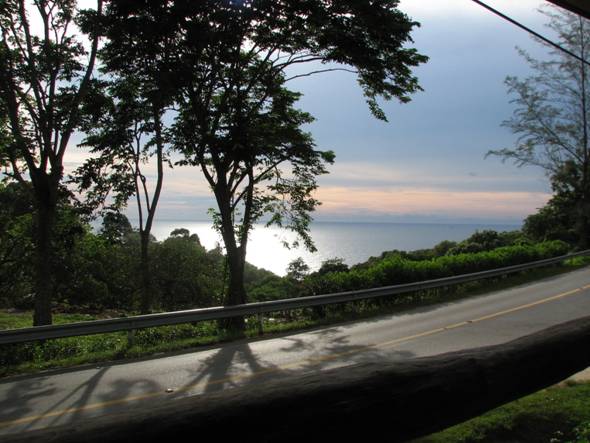 Nin is travelling to Isaan today to spend some time with her mother. So I took her to the airport and said my goodbyes. Most of the day I spent at my ‘base camp’ desk and there was some very good news from Suda indicating
she was getting a good reception from the manufacturers she had approached. Her proactive approach impressed me and was a good example of the Thai work ethic. But then she is an intelligent, well-educated single Thai lady with a responsible
managerial position in a big jewellery company in Bangkok.

Thailand is a very diverse country with exciting cities, tropical islands and rustic villages and the people, so far, are friendly and fun loving; so I can see why the Country is called the ‘land of smiles’. Couple that
with a low crime rate and little serious social unrest and you have a, largely, very safe place to live. In comparison to Southern Africa where I live and the problems in neighbouring Zimbabwe it is extremely safe. Bangkok itself is far safer
than most, if not any, city with such a high population and density. Ten million is probably a fair estimate, which is a lot of people. Thai people welcome foreigners so the crime almost always involves the locals only, but there are exceptions.
It would be unwise anywhere to deal in illegal activities or flash your cash so if you don’t do that you’ll be fine.

Thais love to have fun and are reputed to be very laid back. They love to drink, sing and eat and they try to make you feel comfortable and at ease. But I mustn’t get carried away as I have only been in Phuket, which is a holiday
island for ‘Farangs’, and Bangkok which is a major international city. Things may be very different elsewhere.

Here they learn to service the ‘Farang’ and extract as much of his perceived wealth as possible. Thais love to talk, ask questions and practice their English. Round every corner you will hear ‘Where you come flom?’
For some reason, maybe because I work all day on a laptop, the staff seems to think I’m clued up on many things. Joy called me into the office yesterday to sort out her email problems. I didn’t succeed but fiddled around for
some time trying to look very professional. If she only knew I know about as much as her she might ask someone else. I had to congratulate the owner’s charming wife Nui on the beautiful gardens she maintains in the small complex. I
hope she doesn’t think I’m an expert on anything that grows and starts to consult me about problems she has with plants that I have never seen in my life before. But I’m learning! I asked Pueng if she knew how to terminate
frogs so I can possibly get at least one full night’s sleep before I leave. It was so bad last night that I woke with a start and sat bolt upright in bed thinking there was someone driving a Harley Davidson round the room.

Pueng is a charming young lady, about twenty six, from South Thailand. Very softly spoken, she listens very carefully when I speak in the hope that she can understand some of what I am saying. I hope I can help her improve her English
a little while I’m here although she is actually quite good already. I did a lot of swimming today which helps to keep me reasonably fit. Exercise in this climate is difficult unless you are in an air-conditioned gym. It’s a
pleasure diving into hot water knowing you won’t emerge looking like a brass monkey with three balls when you get out. A glass of wine at the water’s edge, green curry (gang keowan) and some reading to catch up on. That’s
me done for another day.

A Quest for the Perfect Pizza in Northern Thailand