I was rather late to rise this morning; I do miss the birds and their wake up call morning chorus. The 14th floor of a hotel in Bangkok with permanently closed windows rules that out. ‘I suppose there are birds in Bangkok, though
I haven’t seen one yet. I think I’ll make a change and have breakfast in the hotel today.’ That was not such a clever idea as it turned out as the waiter was clearly not ‘au fait’ with the health inspector’s
hygiene directive. When travelling I am always aware of the dangers of contracting some form of food poisoning and, despite some unpleasant practices by waitrons, I have so far been spared lengthy stays in the toilet. 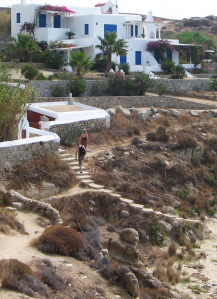 
Many waiters have a bad habit of holding glasses by the rim and this latest incident reminded me of a little ditty I read, in the imported ‘Telegraph’ newspaper, on the beach in Mykonos many moons ago. It was a parody purported
to be written by that great bard Sir Les Patterson (Australian cultural attaché); played by the wonderful Australian actor Barry Humphries. Like Sir Les Patterson I have an aversion to waiters who carry three or four glasses in one hand
by putting their fingers into each glass and squeezing them together. The ditty goes:

“What can I get you this morning Sir?

Said the waiter, whilst picking his nose.

You can’t get your fingers in those.”


A swim this morning did me no harm at all and I followed up with a Thai massage and late morning cappuccino. I really felt sparkly which was good because today was my day to catch up on my diary. I tried to make an hour a day to write
but often got caught up in business matters, which was after all why I was in Bangkok, and so sometimes I felt a little behind. ‘Umh! That would be nice.’ Although my sabbatical was limited in the main to Thailand, including
the Malaysia leg, I was thinking of taking a short trip to Cambodia to visit the ancient temples at Angkor. Something I’ve wanted to do for many years.

Not only was I the English teacher of choice in these parts but it seems that I was now regarded as the hotel staff guru. Advice on many matters, including those of the heart, was sought frequently from me. In fairness, there was much
reciprocation and help when needed so I can’t complain. Tonight I decided to take advantage of ‘happy hour’ only to find that, as it was Sunday, there was no resident band and no other customers. The manageress was in
need of either advice, support or just someone to talk to. As I was the only person in sight I was immediately called into action. She is a very pleasant, smart, good looking woman of forty who comes from Buri Ram, a main rural town in the
north-east about four hours’ drive east of Bangkok. She had recently met a forty-five year old divorced businessman from New Zealand and was clearly very taken by him. As you can imagine she needed advice on all sorts of things including
how to conduct the relationship that was developing, rather slowly in my opinion but then Thais don’t rush these matters. In any event she had a lot longer left than me!! After helping her write her sms she informed me ‘I think
he might be too young for me.’ ‘Why on earth would you think that?’ I asked innocently. ‘Well, my father is 100 and still very active so I really need someone who is at least 60’. I really liked the at least
bit and was thrilled to be of assistance with anything she required!

Today I met Pornchai (head of IT) who is a very pleasant young man appointed to administer and develop the IT infrastructure for the Association. The Thai Gems and Jewellery Traders Association (TGJTA) was established over three decades
ago to serve local gem and jewellery traders and manufacturers who were concentrating on creating a cohesive organisation dedicated to developing and expanding the industry for the benefit of all. The vision and dedication of the TGJTA’s
leadership and members served to grow what was once a cottage industry into one of the world’s leading gem and jewellery manufacturing and trading centres. Following our discussion Pornchai suggested that I should visit his project
manager at their offices which are on the 52nd floor of the Jewellery Trade Centre adjoining the Holiday Inn where I was staying. The day was very productive and there was definitely synergy between us in what we were trying to achieve.

I have to write a lot these days. Emails, sms’s and my diary are keeping me very busy. Oh and I forgot the meetings and taxi rides. Time for a glass of wine and some food methinks!

My morning meeting has been postponed until tomorrow so I can do a few odd jobs and deal with correspondence earlier than usual. I missed breakfast so took brunch around eleven thirty; not feeling too hungry, some fruit, toast and coffee
was sufficient. A visit to a major manufacturer after lunch went well. Everyone is always pleased to see me when I go there and this time was no different. My presentation was well received by a very young management team and although they
were grappling with my new marketing concept I was pleased with the reception. When people ask questions and follow up with more questions and want to negotiate some terms I know there is usually genuine interest. We will see how this unfolds
during the next few days.

Although it is always hot, some days can be really oppressive. Today was one of those and I am wacked out by five. A shower, an hours rest and I was out on the streets and off to the Village for dinner. ‘Silom Village is very busy
tonight.’ Even though it must have been in the mid 30°c’s and sticky nobody was sheltering indoors and the ‘Rubber Band’ was playing again. A plate of prawn spring rolls, fried mixed vegetables and steamed
rice washed down with two or three glasses of wine and buckets of water and ice and I was close to ready for bed.

But, there was a surprise in store. Not a day goes by without something unusual happening; unusual for me, that is. Consider this: ten minutes to cross the road is not unusual here but weaving my way through the crowds and looking down
at the pavement to make sure I’m not going to disappear down a hole again I have to look up at some point. When I did I was staring straight into the eye of, an elephant! Yes, an elephant strolling down Silom Road. I was, to say the
least, a trifle surprised but, as she seemed to be friendly, I gave her a pat and in return she had a good sniff of me, all over, and strolled on her way.

On arrival at the Hotel I headed straight for the bar to, firstly, have a drink and, secondly, to reassure myself that I hadn’t been hallucinating. You never know with those bloody mushrooms! When I relayed my strange experience
to one of the bar hostesses she looked at me rather quizzically. ‘You don’t seem surprised’ I said. ‘No, why should I?’ She replied. ‘No reason’, said I ‘except that we have a lot of
large animals in South Africa and if I was walking down the main street in Johannesburg, Cape Town or Durban I would be rather surprised if I bumped into a giraffe or a zebra or even an elephant!! Can I have another drink please?’

My Input On The Ladyboy Debate