EPISODE SIX – A WEEK IN BANGKOK

I woke early today as I needed to prepare for my first meeting at nine thirty. A young man acting as chauffeur arrived and introduced himself as some unpronounceable Thai name. Seeing my expression he quickly said ‘……but you can call me Nut’. No point me asking if his second name is Case! He’d never get it.

A few kilometres in Bangkok at nine am is the same distance as a few kilometres anywhere but can take considerably longer. It is often quicker to walk if the distance is not too far. I really can’t believe that I’ve never seen an accident in this City. Every centimetre of tarmac is covered by cars, tuktuks, scooters, bikes, buses, roadside eateries, stalls and people. 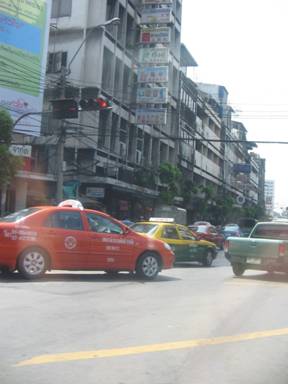 The offices are located in a very old five storey building where everything is antiquated but functional, like so much in ‘the land of smiles’. The factory has been running for twenty years and it will probably look and operate just the same in another twenty. Well, my presentation was well received and I think the meeting went very well. I’ll follow up on Thursday and then I’ll really know.

I bought a book by the Dalai Lama yesterday called ‘How to see yourself as you really are’; something I’ve been trying to do for 65 years. It was cheaper than spectacles so let’s hope it works. I do love his writing; it’s so clear and insightful.

Back at the hotel I was just in time for my next appointment with long time suppliers of ours. They really are a delightfully friendly family; husband, wife and son. I was well received, as usual, and so were my plans. I’m sure they’ll come on board. I will know for sure next week; it’s been a really excellent day so far. 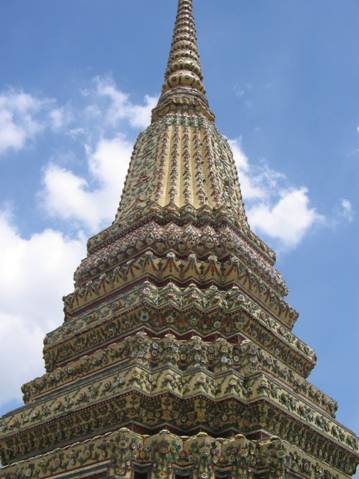 I’ve just managed half a Skype conversation with Paul in Cape Town. I say half because he has a microphone and I don’t. His voice quality was excellent so it will be really exciting when he can hear me too!! Maybe I’ll get fixed up tomorrow but right now I need some fresh air. What did I just hear myself say? I should know by now that there’s no fresh air in Bangkok; I have to really steel myself to be here for two weeks. As I took a short walk down Silom Road the sky blackened rapidly, the wind came up and the temperature dropped dramatically. Better get back quick there’s a big storm brewing. Phew; just made it.

I haven’t eaten today except for a little fruit this morning so I’d better get myself a salad in the hotel then prepare for my last meeting at six thirty. Another very positive two hours with the customary long Thai ‘good byes’ exchanged and, you know what; I think I need a glass of wine. Oh bugger; I’ve missed happy hour again. Never mind; goodnight folks; see you in the morning.

I’m sure it’s up there somewhere

I’m having pineapple on the street from my usual motor-bike shop for breakfast again. I really should vary my eating a bit more even though the pineapple is delightfully, succulently juicylicious. Maybe I’ll do ‘camel’s eye in aspic’ or ‘chilled armadillos balls’ tomorrow!! 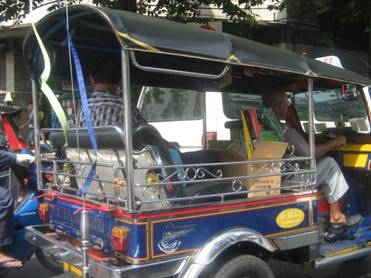 I was collected by Kay this morning to visit the family’s jewellery business. The company which operates from a three storey building in central Bangkok, houses about thirty five employees for whom they also provide accommodation free in an adjacent building. The idea is that they can keep an eye on everyone who feels part of the business. Staff retention is good because the employees don’t get paid a lot but have a place to live and no travelling costs. It is an interesting concept and they are like one big happy family. Could it work in Cape Town? I doubt it very much.

Bangkok is invasive in the extreme; a major assault on ones senses and can be overwhelming. Even though I’ve been here on four occasions now I still find it both stressful and invigorating, which is, I know, a total contradiction but the best way I can find to describe it. They have recently introduced pedestrian crossings which are just zebras with no lights. Come to think of it I don’t think I’ve ever seen a zebra with lights! It can often take up to, what feels like ten minutes but is probably less, before there is a break in the traffic and you can cross. Pedestrians are always at the mercy of the traffic and quite rightly accord the motor vehicle a higher status. Hence, there seems to be very few accidents between walkers and drivers. Sorry to change the subject but I haven’t seen the sky since I arrived; I’m sure it’s up there somewhere.

The drive, with Kay at the wheel, took us through an area I have not seen before. Teeming with wholesale businesses spilling out onto the streets, everything imaginable is stacked, floor to ceiling, from plastic bags to elastic bands. Imagine making a living out of selling elastic bands. That must be thrilling. ‘Try these madam, they are so well made you can hit your neighbour at thirty metres’.

Spending time with Kay is always enjoyable and today was particularly productive as she can’t wait for us to get the new business, web-marketing her products, started. We had lunch at the famous monster electronics market, on five floors, called Panthip Plaza. There, I bought a small microphone for my laptop so Paul, who couldn’t work out why he couldn’t hear me on Skype, now can! I won’t tell him it was my cock-up.

Kay kindly rushed me back to the hotel from Panthip so I could meet Mr. Tee at four pm. That proved to be unnecessary as he had got stuck, for hours, on the Expressway coming from Pattaya, in the ‘cats and dog’ rain, as he put it. We rescheduled for Friday. 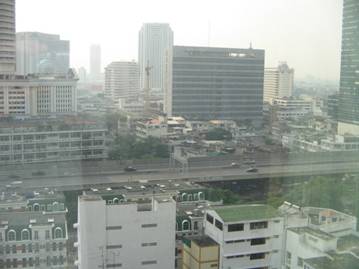 With my diary finished for the day and no more business to attend to I trundle off for dinner. Strolling down Silom Road I found a lovely area called Silom Village; shops and open air (I use the word air reservedly) restaurants with a traditional Thai dancing troupe; all very quaint and relaxing with delicious food too.

In a pleasantly relaxed state I noticed that nobody was smoking and then I started to talk with myself which seems to have become a habit lately. ‘I’ve never seen a Thai lady smoking and come to think of it I can’t recall seeing many men either but I know they do. Why do they need to smoke anyway? The air in Bangkok is polluted enough.’

What’s The Best Feature? It Is Not Som Tam