“And there was a beautiful view but nobody could see. ‘Cause everybody on the island was saying: Look at me! Look at me!” (Laurie Anderson)

Five am and I’m out of bed and off to the airport. Nine fifty am and I’m on a tropical island in the Andaman sea.

Kuala Lumpur was hot but this is up a notch or two mainly because of the humidity which can be anything up to 95% when the monsoon starts and seldom falls below 80%. Now out of Jonathan’s clutches perhaps I could relax for a few days, catch up with some business on my laptop and prepare for my trip to Bangkok the following week.

It’s amazing how disoriented you can get when you are travelling. There’s the change in time zones to contend with and the acclimatising; not only to the weather, but to the different mentality of the people and their customs. You know, ‘When in Rome’ and all that stuff; so remember Thais hurt easy but just don’t show it if they are adept at being ‘jai yen yen) .

You can hurt someone and not even know it. Thai girls don’t like to kiss in a passionate way, for example. I don’t want you getting into hot water if you ever visit the Country. Their intimate kiss is a sniff of your cheek and if they do that then you know you are really in favour! By the way I discovered recently that whilst it’s alright to talk generally over a meal it’s not polite to ask questions until the person has finished. That’s an interesting one!

Underwear can save your life!

Now I’ve been told that Thais always don their underwear when sleeping just in case of an emergency, like a fire, and they have to run into the street. I found this out when I asked why any one bothered with clothes at all because it is so bloody hot all the time. So the advice is; keep your knickers on at all times just in case of fire. I’m not convinced it will save your life but it may save embarrassment. For me, I wouldn’t give a ‘monkey’s’ as long as I got my arse out of that building! If the slogan ‘Smoking can DAMAGE your health’ has not had any effect on slowing down cigarette sales imagine how retailers of lingerie might boost their sales dramatically with a slogan like ‘Underwear can SAVE your life”.

Setting up a mobile office, dealing with power adaptors and internet connections is quite daunting for a non-techy like me. However, modern technology is wonderful if you can get it right and it allows you to work away from your usual environment much easier and more efficiently than ever before.

Living out of a suitcase for the next few months was not a thrilling prospect so I planned to make a base in the south of Phuket at a resort hotel called Kata Lucky Villas in Kata Beach. 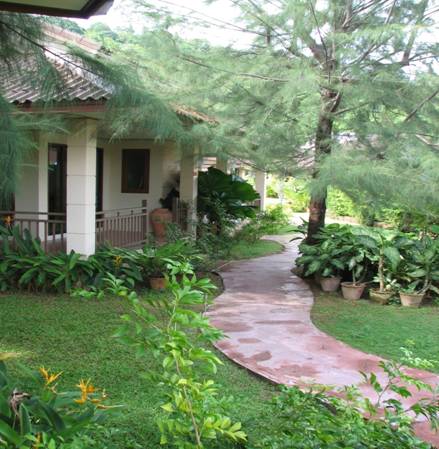 Fortunately it was low season; I don’t know why because apart from more rain in June, July and august its great holiday weather, so it’s very quiet and I could easily work and play without any hassle. I rented a one bedroom semi-detached villa. There are 28 in the complex which is set in a delightful tropical garden with a very pleasant landscaped swimming pool right outside my door. The facilities are good, not five star, but more than adequate for my purposes. WIFI internet connection was good with no unmanageable breakdowns; a little kitchenette, table and chairs, a fridge but no cooking facilities, TV, desktop and I was, well, fine and dandy.

I started feeling decidedly better health wise since I arrived even though it was hot and humid. My sinuses cleared up completely and de-toxing is natural because you perspire so much. I thought then it would be quite tempting to move there someday. At least I’d never be cold again, the food is fantastic and there are plenty of birds!

I took a few hours out of the day and drove on my rented scooter bike over the hills through the little villages and tropical forest where elephants were stripping vegetation on the roadside. I found a quiet little restaurant under the coconut palms on the beach at Naiharn and tucked into a delicious lunch of Papaya salad (Som Tum), Fried noodles with chicken (Pad Thai) and a plate of fresh fruit plus a bottle of water (Nam). It was far more than I could eat so a friendly stray dog invited himself to help me out. The bin (bill) came to 120 baht, paradise was free but the dog buggered off without paying!

Communication can be a bit tricky if you have to keep logging in and out to save internet cards as I did. I hoped in Bangkok that my hotel would give me free open access as more places are starting to do now. I wrote in my diary, ‘I’m splitting my day up into a few parts and it seems to be working for me at the moment. I still have a lot to do before my first sortie to Bangkok which starts on Sunday. I took an early morning walk on the beach followed by breakfast, which I am varying from day to day. Generally I have fruit and china tea but this morning I had Dim Sum in a very basic roadside Chinese cafe. (Upgraded since I wrote this and very well known – Mala on the main Karon – Kata road) It made a pleasant change but I’ll be back on the fruit tomorrow. I had twenty emails to deal with today and I was still busy at four pm when I took a break, went for a stroll and then worked again from six till eight pm. After dinner and a glass of ‘vino’ I was ‘knackered’ and fell into bed.’

‘Jai yen yen’ is a laid back attitude associated with the ability not to take offense at anything. It is a character trait all Thais aspire to but few attain.

Put a New Frame on That Picture