Out of bed, in the shower, gone. Here we go again. I don’t even remember going to bed last night! At least we had a leisurely breakfast in my hotel, the Palace of the Golden Horses, which is described as Asia’s most extraordinary hotel; breakfast there was just the prelude to another very long hot and humid day. The hotel, which is set in the Mines Resort City, has hosted some notable VIP’s including Queen Elizabeth and Nelson Mandela. The resort includes a golf course, exotic tropical gardens, crystal clear sparkling lakes, water taxis to the shopping centre, a modern business park and more. I can’t remember how many stars but it is of pretty high standard, four or five at a guess, stately and grandiose which was beginning to worry me a little until I discovered that my sumptuously spacious room cost $90 a day.

‘One more ciggy and then we’ll go.’ Jonathan appears to be a chain smoker but said he only smokes twenty a day. Must be all at the same time! The family were almost ready so I watched cartoons on the TV with Ruen. She’d obviously worked out that I’m not Chinese as I could understand everything she said. ‘Are we all ready now?’ said Ruen’s Mum. ‘Yes.’ squeaks Ruen. ‘OK, we’re off to Melaka.’

130 kms south of Kuala Lumpur on the spine road which runs from Thailand through Malaysia to Singapore lies the old capital of Malaysia. The first class highway sports three wide lanes with toll gates, and a very interesting and speedy method for passing through called ‘Smart Tag’. You open an account and fix a reader to your windscreen inside. As you approach the gate a sensor picks you up and lets you through without stopping. At the same time it tells you on a screen how much is left in your account. No staff and no fumbling for change so traffic flow is unimpeded. What an excellent idea and I’ve never seen it before; though come to think of it it’s not the only thing I haven’t seen. There were many pit stops along the way; toilets, gasoline and loads of food vendors. 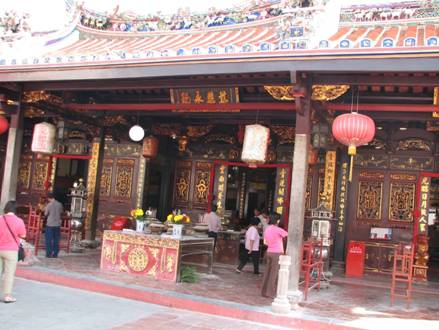 The historical city centre of Melaka has been listed as a UNESCO World Heritage Site since 2008. Melaka is the old capital of Malaysia built by the Dutch and influenced by the English and Portuguese, I believe. Beautiful sculpted gardens, museums and intriguing architecture from a bygone era adorn the City. Fascinating, very narrow, double storey, cigar shaped houses, most of which have been transformed into quaint little shops or temples, line the kindred streets and are a must see for tourists. Some are even, what I would describe as, inside out bars which are very cosy and friendly, not at all modern but possessing an olde worlde charm. In fact the whole place, despite its undoubted authenticity, seems to have been custom made for tourists. Interwoven with serene, winding canals which are home to giant lizards swimming alongside the river boats, it resembles a gigantic crocheted doily, perfectly knitted. Colourful street vendors and rickshaws abound but there’s no hassling for business here. Just friendly smiles and a ‘we are here for you if you want us’ pleasant attitude. 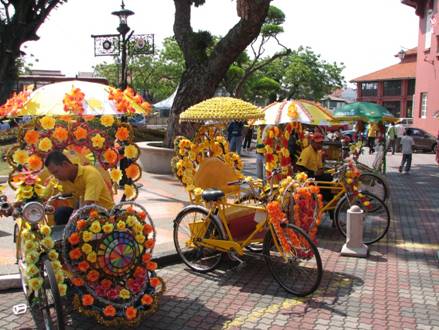 It was very hot and I was tired but there was still more to do. We took a short drive to a huge open air Plaza on the shores of the Malacca Straits, the strip of sea that separates Indonesia from Malaysia. Many open air restaurants, serving big family tables, were offering mouth-watering fish and seafood dishes, curries and other Asian delights. Malaysia embraces all cultures but food mainly consists of Chinese, Indian and Malay cooking. So if you like spicy aromatic freshly cooked food you will be in seventh heaven. These are the places the locals frequent; basic and unpretentious but the food is divinely aromatic and moreish. With the warm sea lapping my feet, feeling more like King Canute than King James, I wallowed in the warm hospitality and sumptuous fish and seafood supper. Crab, prawns, fish and more with litres of drink. For a family of five this would have broken the bank in many places and at RM 160 ($45) I thought there must be a mistake. Happily not so. 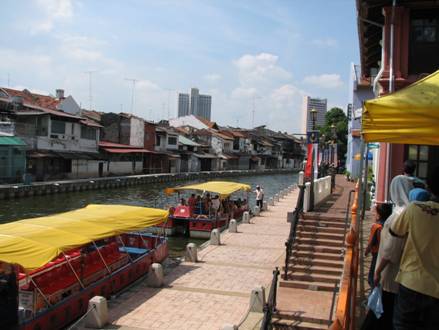 ‘Gasoline is going up 35% tomorrow.’ Said Jonathan. You should’ve seen the queues at the filling stations and at eleven thirty pm! I think I was actually asleep before I got into bed for the second day running.

How kind of Jonathan to let me rest in the hotel until 2.30pm. He must have had something far more important to do, thank god.

‘Where are we going today Jonathan?’

‘To the mountains and the jungle’

‘But it’s pissing down’

‘Don’t worry it’ll stop soon; its monsoon.’ It did.

Driving north from Kuala Lumpur we made for the hills. Winding slowly up through the misty tropical rain forest, monkeys were playing at the road side; how much higher, I’m wondering, are we going? As we pass small mountain villages climbing to 3500 feet, I discovered we are about halfway when we suddenly pulled off the road. ‘This looks interesting folks.’ Well, ‘stone me’, there’s a golf course in the jungle half way up a mountain. It was in pristine condition and incorporated a hotel, leisure facilities and several fine restaurants. After twenty minutes I was fully acclimatised to the altitude!! Crampons and oxygen at the ready we were off to the summit. What could there possibly be at 7000ft. in the jungle? Surely not a casino and theme park which resembled an airport check-in concourse. You’ve gotta be kidding. Good grief; the place was so busy half of Kuala Lumpur must’ve been there and it must be a ‘gold mine’ (figuratively speaking). Another mouth-watering Malay/Chinese meal at the golf course punctuated the return trip on my return to the hotel and bed.

All this time I forgot Jonathan had got more energy than a nuclear power station. I should have remembered, when he came to see me in Cape Town last year, that he walked up the front of Table Mountain, which only serious walkers and the terminally insane do; and he didn’t take water with him.

Foreigners are welcome: – Buy a home for a minimum of RM250,000 ($70,000) and you can live there on the second home program as long as you have enough income to support yourself.

Nothing is perfect but this country seems to have quite a lot going for it.

I’m off to Thailand tomorrow; what a wonderful three days with hospitality in abundance.

Ghost Made Her Cheat!

In response to “A Man with Options”