More Fun in the Philippines Part 1

The slogan above appears in quotation marks because it is part of a television commercial that is intended to promote tourism in the Philippines. Some of my expat friends have adopted this slogan as a remark to describe life here, whether it is a good experience or not. I have been living here for about 6 months now and while that doesn't qualify me as an expert by any means, I wanted to log some of my early perceptions while they are fresh in my mind. The reader of this account should understand that this is only my experience and each of us may well have a different idea. Having said that, I will describe my perceptions and experience on life in the Philippines. I expect that I will need a few different submissions to cover this wonderful country so this first post will be part one, and so on. The writings will be categorized by sub title in order to keep it better organized.

I have previously written about Catbalogan, a small city in Eastern Samar, part of the Visaya islands. I lived there about 2 months or so but really, it was just too small for me. Although it is a wonderful place to visit it lacks some of the things in life I think I need. I now live in Tacloban City, in Northern Leyte, a much larger city with a population of about 500,000 which likely has over 100 expats. I have been able to find almost everything I want here. Sometimes it takes a little time, but I have expat friends, some that have been here a very long time, and they will direct me to what I am looking for. Tacloban is a much wealthier city and thus has many more things to offer than Catbalogan. See Catbalogan 1, 2, and 3 for my submissions about this city.

People seem to have money here with many cars, some new, and well dressed women and men. There are four large universities here with scores of students. There are a large number of restaurants and nightspots offering American, Mexican, Italian, and of course Filipino food. It is mostly very good and surprisingly cheap. The range for very good food is about $2.50 to $4.50 with the absolute top price at about $20 for a large well cooked NY strip steak dinner. The best restaurants do a very brisk business. The people are quite friendly and helpful, always. Tacloban, is a vibrant, busy city with everything I need and most of what I want. Most of this content is about Tacloban although some of the writings could equally apply to the Philippines in general.

It is very cheap to live here which is a major draw for Westerners. In spite of the good economics for the Philippines, data like the GDP currently at 6.8% growth, unemployment is still 7.5 percent! (Bank of the Philippines) Some speculate that instead of hiring new employees. companies are simply working their current staff extra hours. There are many that are self-employed and those like a carpenter that work by the day and therefore may not be counted among the employed. In short, who knows? The street vendors do a brisk business and many will go to the same location every day and I see how they have expanded their products over time. People here will support the street vendors if their quality is good and the price is right. They will purchase items, in bulk from wholesalers, sell them at a small markup and sell them 1 at a time.

The American dollar has been doing well against the Philippine Peso. It has strengthened from about P40 to a 2 year high of over P43! While the Aussie dollar is down from a 2 year high of P46 and is now at about P40. (Source) Yes, this does make a difference as I now get 10,000 Ph Pesos at the ATM for about $17 less than 2 months ago. The single largest economic benefit to Westerners living here has to be the cost of housing. I rent a large, new, single bedroom furnished apartment for $165 per month. It is a very nice well maintained building with 9 units and a security gate. This would compare to an apartment in Los Angeles or New York that rents for something between $1200 and $1800 per month. The following is a list of my monthly expenses in US Dollars:


Notably, I spend a lot on entertainment and food as I really enjoy life here and stay active. The food costs are high because I eat out often and eat well at home. Electric rates are high here, but I have discovered that a simple fan will
cool my home most of the time and I will likely run the air-conditioner less. I expect this cost will go down. 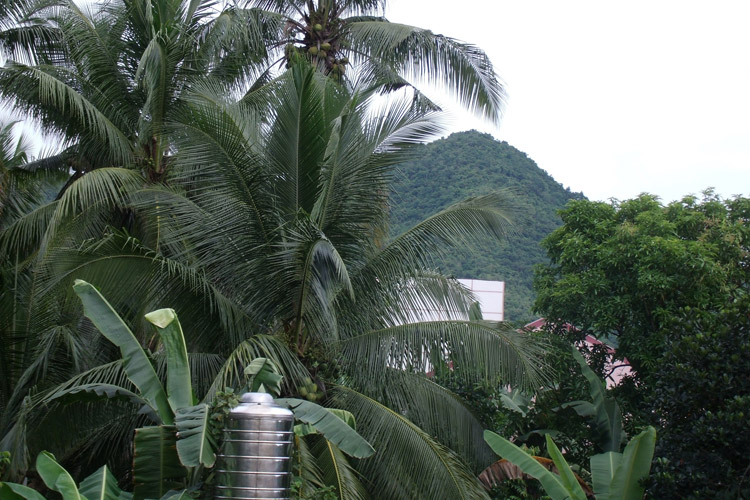 The view out my living room window

The traffic here is organized chaos! The only thing that is the same as the US is the traffic travels on the right hand side of the road (mostly, smiling). Like Thailand, there are many motorcycles. Most are small and relatively cheap to
buy at about $1,500 new and registered for 1 year. You can purchase a very good second-hand motorcycle for about $925. A car ranges from about $2,400 to more than $45,000 and up, of course. I will get my own transportation, but, as of yet I haven't
decided on a car or a motorcycle. So, the transportation category will be about public transportation. 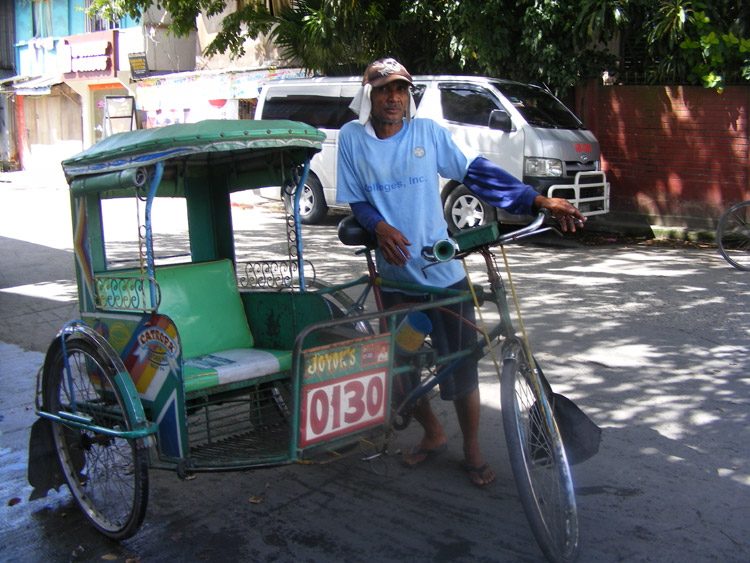 The Pedicab is a simple bicycle with an attached side car. This is really the simplest form of transportation. The sturdy drivers will take you short distances for a very reasonable fee. What is remarkable about these pedicabs is the drivers
is the age range is broad from old men to boys about 10 years old. The ride can be a bit bumpy over occasional bumps in the road, but most all drivers weave carefully along the road and avoid the worst areas. The rates are very, very cheap. With
a cost of $.12 for about 400 meters to a fare of $.47 for a distance of 2 to 3 Kilometers. If you have 2 passengers simply double the fare. I take a Pedicab when I travel to an area called Tallipapa which is a Jeepney Terminal where you can go
downtown or to the airport and points in between.

Jeepneys and Multicabs are basically the same. The Filipino version of a city bus, they travel a specific route and stop to let passengers off when they knock on the roof or verbally ask them to stop. In downtown there are specifically designated
stops within each block. The Multicabs are smaller and more fuel efficient than the Jeepneys. Most of the Jeepneys are old and in disrepair, so the common viewpoint is that the Multicabs will replace the Jeepney. It makes sense. Other than the
difference in the vehicles everything is the same, including the routes and fares.

Multicab. There are terminals that most Jeepneys and Multicabs use. One is in Talipapa, close to my home, another at Robinson's shopping mall, and another by McDonald's restaurant in downtown Tacloban. The drivers will try to load
as many passengers as they can possible fit. If there are children they may sit on parents' laps to fit in more riders. The Jeepney's are notorious for overloading, when the traffic police stop work for the day.

The fare is a simple single charge per passenger. For all destinations within Taclobaqn the fare is $.19 with trips to neighboring Palo or Tinauan won't break anyone at $.26. As these vehicles move along people will pay the driver and
pass the money along the rows of passengers. When the driver makes change he hands it to the passenger directly behind him and it is passed along to the correct person. It seems to me that this is all on the honor system. Some will offer music,
always of the driver's choosing, but most don't. 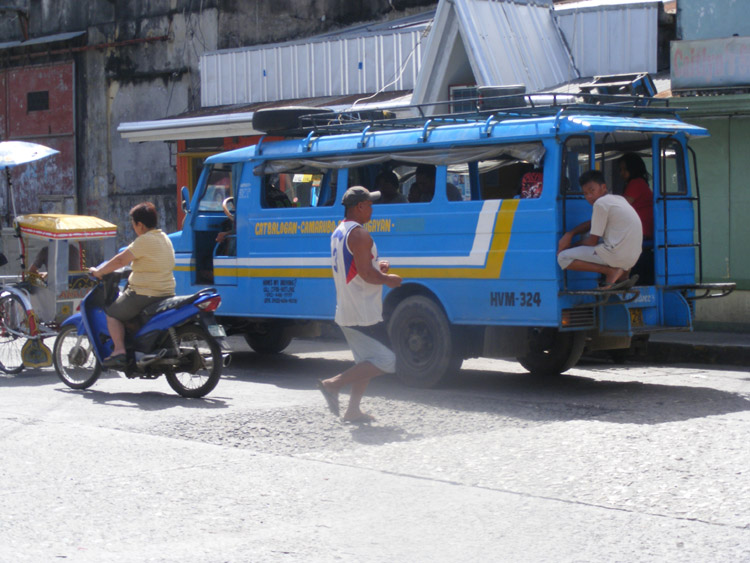 The Trike is very common in the Philippines. It is simply a motorcycle with a covered side car. They are more expensive than the Jeepneys and Multicabs but still very reasonable. They are powered by small motorcycles about 150 to 200 cc's.
The above mentioned vehicles will stop running about 8 PM so a Trike is the only choice if one is downtown late. The fares range from about $.18 to $2.31 for a trip of 7.5 Kilometers after 8 PM. They are quite difficult to drive due to the heavy
sturdy side car. I tried once and despite considerable experience with motorcycle riding, found it difficult. That said I find the drivers to be quite skilled.

Public transportation in Tacloban, and The Philippines is cheap and a fairly painless unless you are phobic or unwilling to take a risk. The safety is certainly questionable, but honestly due to congestion and traffic the speeds are seldom
over 30 or 40 Kph. To travel from my home in what I would call suburban Tacloban to downtown it takes about 20 to 30 minutes. During rush hour, of course it takes longer. I began this trip with a Pedicab to Tallipapa, then catch a Jeepney to downtown
for a total of $.42! I always give the Pedicab driver 10 Peso instead of 5 because I really respect how hard they work.

My experience with PNP Philippine National Police has been very limited, but the few contacts I have had have been very good. When I first arrived in Tacloban I wanted to travel to the local mall. I had the right street to catch a Multicab
but I kept watching for the right signboard in the front window with no luck. I asked a traffic cop to be sure I was in the right place. Without a word he motioned for me to follow him where he blew his whistle, stopped traffic while we crossed
the street. He then stepped in front of the slow moving Multicab and blew his whistle while holding his hand up. I thanked him and boarded.

Another time I was with a group of friends at La Rica, a disco on the top floor of a hotel. I struck up a conversation with a man who told me he was a policeman from Manila. He was really quite pleasant and spoke excellent English. It seems
he was in Tacloban to check on his men here. We had a very amicable conversation. He told me if I ever needed anything to come to the RTO police branch and see him or one of his men. Sensing an opportunity to cement a friendship I went to that
station the next day. He was there and remembered me. He was very gracious and introduced me to some others. I discovered he was the National Assistant Chief of Detectives and carried the rank of Colonel. I spent an hour or so there and left with
his business card. This well may be something of a help in the future.

This will conclude Part 1 of "More Fun in the Philippines"�. The Part 2 will be about Filipino people and particularly Filipino women. I hope readers find this interesting, I know I do!! I do hope I find some interest here
in these ramblings. Feed back is both wanted and welcome.

Very interesting indeed. One thing really stands out – the Philippines appears to offer a very low cost of living!

Tales From The Village Part 4

In Response to “Real Estate Agents in Thailand”