Tales From The Village Part 4

My wife insisted on me going to a village near Phichit. Apparently there was a man who wants to sell 30 rai of prime rice land for 3 million baht. She tells me this is a wonderful opportunity as because there is a nearby river you can apparently grow rice on the land twice a year. This land is only a few miles away from my father in law's mia noi. My wife wants me to buy her this land and we would make lots of money. I replied that you cannot cope with all the businesses we are trying to run at the moment. She tells me we can commute every few days between our present house and this new piece of land. I am thinking, new house, diesel commuting costs, another tractor, etc.

Anyway, we go visit the land but I just ask where is the money coming from. My wife says sell your remaining assets in Farangland to pay for it. (I think not good idea).

I manage to put off the decision by saying that I don't mind her spending the profits from our farming ventures later in the year plus a bank loan to buy the land. My wife tells me that the owner is only going to sell to us as he is a long time friend of her father (that comment set the alarm bells ringing). A few days later she lets slip that her dad and mia noi were going to live on the rice farm so I in effect would have been setting up father in law with a love nest for him and his mia noi of many years' standing!

A few weeks later we find that the guy (he is a husband of a cousin of my wife's) who is ploughing our land is scared of ploughing land on a slope. He comes from a flattish area of Thailand whilst we live in the hills with hardly a piece of flat land in sight. We then have to employ a further man to plough the hilly fields with our tractor. Then the wife and father in law decide we need another tractor to keep both men fully employed. My protestations are swept aside.

A few days later we go the Kubota showroom and they decide we need a new tractor as the second-hand models are not much cheaper than a new one. I say I cannot afford to buy another one, so they go for the HP route. To borrow money on HP you need two people to act as guarantors of the debt. My wife duly gets a friend and the wife of her brother to act as guarantor.

That evening, before the loan has been approved, her brother comes around and says what on earth are you doing? Well, actually I don't know what he said but anyway luckily the wife listens to her brother and the second tractor idea gets abandoned. Phew, a second close shave within a couple of months. These two episodes suggest my father in law / wife are trying to get me to spend all my money, whilst I am desperately trying not to spend any more of it.

Another brother in law, the one with the wife from Khon Kaen, has finally got his wife pregnant. Another addition to my extended family.

The guy who we went into business with buffalo has decided he does not want to continue. The baby buffalo born as in my last submission has died due to the drought of the last 3 months so we now have 6 buffalo on our hands which we have confined on 5 rai of our own land. As they get to know you they become quite friendly although one just flicked his head when I was stroking her and her head caught my hand and it doesn't half hurt.

Yesterday the rain came down torrentially and corn planting can begin in earnest. When I went to let the chickens out there was a snake in the chicken house. 2 chickens missing and two bulges in the snake's abdomen! I released the remaining chickens from the coop and fled shouting ngu, ngu at the top of my voice. One guy caught it in a noose and I have identified the snake as a Burmese Python (Ngu larm). It was put into a fertiliser sack and to my amazement they are going to release it in the mountains. I thought they were gong to eat it.

Unfortunately the camera auto focused on the string thus I don't have a good shot of the snake. Not easy taking a photo with the man in front hauling out the snake with a noose. 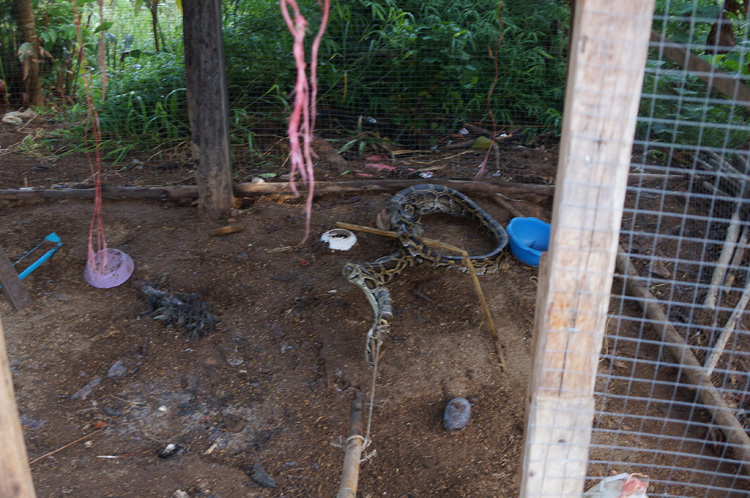 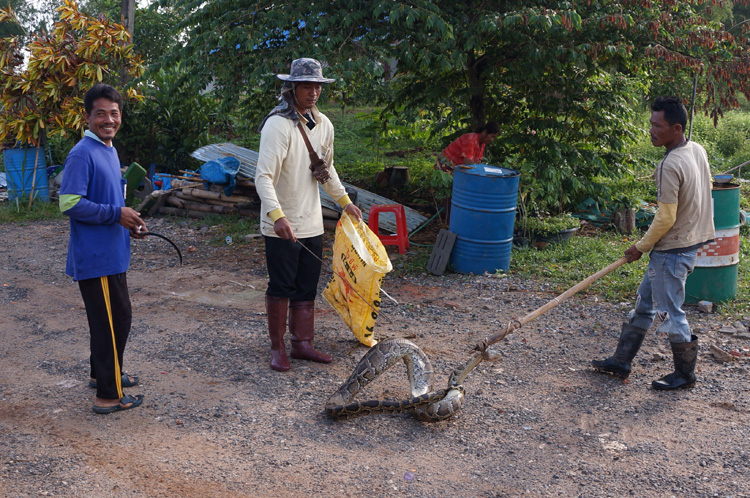 The guys dealing with the snake.

We have decided that our new farming project is going to be silkworm production. We have already started off a few mulberry cuttings and have been getting quotes for a new barn to house the silkworm.

In preparation we have sold the buffalo as they needed too much time spent on them plus they had escaped in to neighbouring fields causing damage which I had to pay up for, a liability too far. Thus the 5 rai can now be turned over to mulberry bushes. The advantage with this crop is that the price is guaranteed and so unlike chillies and most other crops apart from rice which also has a minimum guaranteed price, thus you know how much money you will get each month and can budget sensibly.

We go fishing Thai style, no rod and line like normal people. They empty the water from the ditch using the long pipe in the second picture leaving all the fish behind then they just pick them up. One man was electrocuting the fish using a home made contraption and a battery pack on his back. 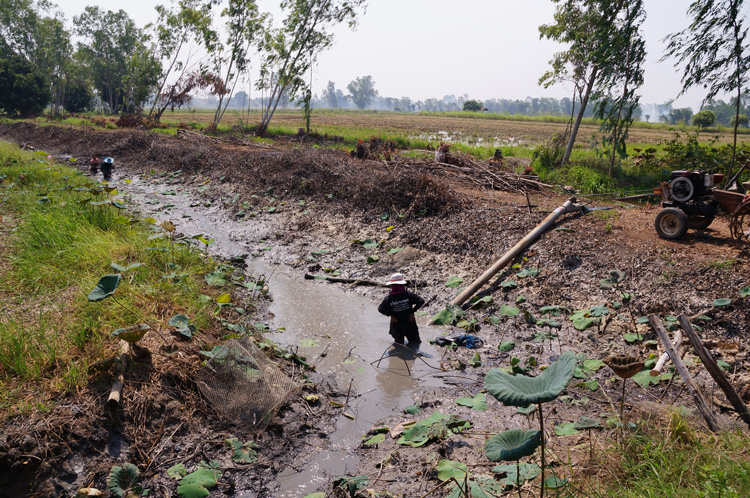 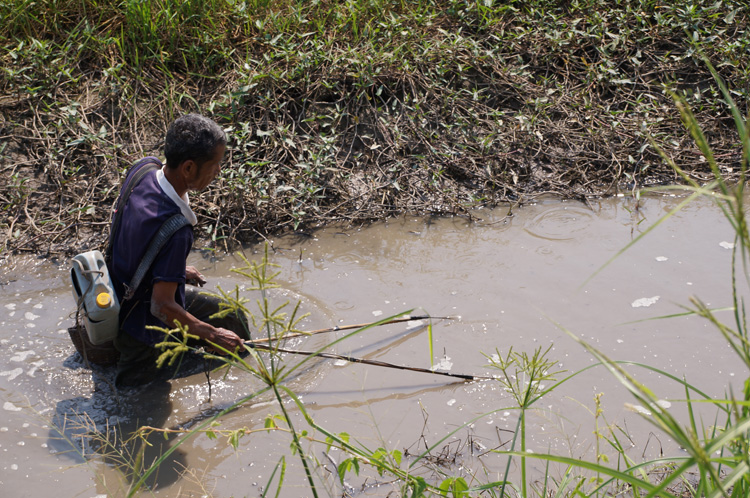 I really enjoy these reports from the village. It sounds awfully different not just from Farangland, but from what those of us living in Bangkok experience. I hope you're happy out there!

A Story Of Everyday Life In Bangkok

More Fun in the Philippines Part 1