Hi Stick, I thought you and perhaps some of your readers might be of my era and remember that “The Ship” in Soi 23 just around the corner from Soi Cowboy, back in the 70's used to be called the “George & Dragon” pub / restaurant, run by a Geordie we called 'Doc', a medic on the oil rigs.

I worked as an aircraft engineer in Saudi Arabia in the late 60's and early 70's, eventually leaving in 1980, for Airwork Services Ltd. On my last leave in UK I fell for and soon married the worst possible match for me. The marriage was doomed even before the wedding – she was a born cheat with no morals and I couldn't see past her more obvious assets. I thought she was a 'nice' girl, which proves only that I knew bugger-all about women. I still don't!

In 1973 there was another recession on, 3-day working week, etc. We needed money and discussed our options. We decided the best way to get what we (she) wanted was for me to go back to work in the Middle East on a large tax-free salary, so I rejoined Airwork and went off to work in The Sultanate of Oman at Seeb Airport, Muscat.

Even before I arrived there my wife was shagging every man that looked twice at her and it didn't take long for her to find a replacement and divorce me. She sent me a 'Dear John' letter in Muscat and naturally I rushed home to try to get her back, but that was a waste of time and money. She really took the piss in a big way.

So back to Muscat I went, a broken shell of a man to drown my sorrows with 2 bottles of cheap brandy a day, and the obvious choice was to go on holiday with my mates to Bangkok and try to shag that bitch-whore out of my system. My mates and I always stayed at the Honey Hotel on Soi 19 and in those days there were a few bars bot far from the hotel. Up on the right side at Sukhumvit was the Cock & Bull, with the Joker Club upstairs which had a good Filipino rock band. Over the other side of Sukhumvit and along to the left a bit was El Toro Grande, a gogo bar which was my favourite haunt. It's now an Aussie pub and I think it's now called The Black Swan, I can't quite remember. Along Sukhumvit further past El Toro was the Rose Bar, Rosemary 2 and The 3 Roses, and at that time Soi Cowboy was much quieter than now. There was hardly any neon lighting and chrome. Patpong 1 and later Patpong 2 over the other side of town, a 25 baht taxi ride if you were lucky, were the flashier neon palaces such as the Texxan, the Flying Machine, and a few others but we didn't venture over that way often – it was much more expensive than Sukhumvit / Soi Cowboy, and the girls were tougher and more experienced. In El Toro you could often find fresh girls who had recently come down from Isaan, many of whom had not yet picked up any English. They were really sweet and genuinely friendly, and if you found a nice one she would stay with you as long as you wanted, so long as you paid for her meals and gave her a little money to go shopping every now and then. My friends and I thought of it more as a girlfriend experience, rather than whore-mongering. On Soi Cowboy the bargirls spoke with American accents, as did their counterparts on Patpong – the war in Vietnam was officially over but there were still a lot of American servicemen and military 'advisers' around. They hated us 'farang' guys because we paid the girls what we thought was a fair price (200 baht for all night) and treated them like ladies. Some of the US Veterans there had been wounded and mentally scarred in 'Nam, so much so that they knew they could never fit in back home, so they just stayed on in Thailand and had what they saw as a good time on their war pension. They kept the prices way down – none of them would pay even a measly 100 baht and they normally went 'short-time' for 50 or even less. I heard of some who only ever paid 20 baht.

There were a lot of gentlemen in Bangkok whom we assumed were CIA guys and large numbers of black Americans who dressed well and carried brief-cases and appeared to be doing business. Many of them ate in Mitch 'n Nam's Steakhouse at the corner of Soi 22, where they served real Southern American grub – clam chowder, corn-bread, black-eyed peas, refried beans and of course a lot of chicken and shrimp. The food was great and it was a fun place to hang out, but the guys with ties and briefcases would never talk business to us, so we were left well alone. I expect they were a link in the heroin chain between the Golden Triangle and Bangkok Docks.

My friends Dave (Geordie lad), Stevie Christmas and Jim who had been in Laos and fled to Thailand showed me the ropes on my first visit to Bangkok as well as several others who worked for Airwork in Oman. Several of them preferred the beach and spent most of their time in Pattaya. Some started hotels and bars there, and many are still there, enjoying the good life.

Me, I loved the excitement and hustle & bustle of Bangkok and I soon got into the habit of spending every leave there. I drank far too much (trying to mend my broken heart but only getting diabetes and high blood pressure) and had a lot of girlfriends (same reason) and eventually met a petite Isaan lady called Noy, who is sitting next to me in the photo, sandwiched between Dave and his wife Arree. Jim and Amphar are on the left. We had married by then, it was 1979 and we were celebrating over a meal and drinks in the George & Dragon. My wife gave me the photo yesterday to scan, which prompted me to write in reply to the news of how 'The Ship' had closed down. 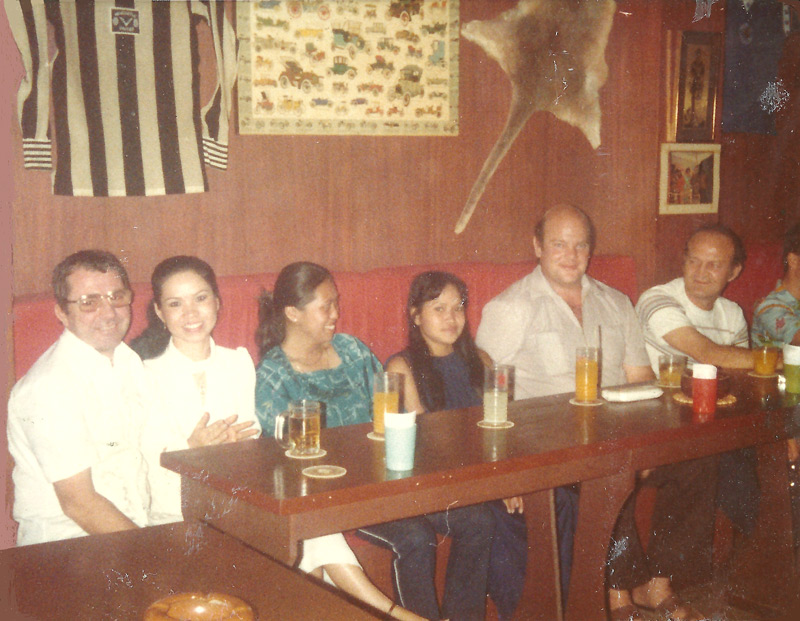 I knew The Ship had been the George and Dragon from my last visit in 2010. I used the place as a kicking-off point in the evening where I could get a great plate of liver and onions with chips and peas before setting out for a stroll around the corner and along Soi Cowboy, stopping off at various bars and trying to remember what they had been like back in the day. Jim had opened a bar himself with a few fans and no air-conditioning at all, with a Filipina partner, Rose, who managed the place which he rented from Mrs. Rattree who owned many such bars along the Soi. Rose thought of Jim as her property and was often to be seen in their bar, pissed as a newt, throwing a huge flick-knife at the dartboard and cursing Jim when he was round at El Toro Grande with his true love, Noi Amphar. On one occasion Rose stole his passport and threw all his clothes out on to the street, and Dave, Steve and I had to try to pacify her so that Jim could show his face without getting a knife in it! I'm told hot temper is quite a common trait among Filipina ladies.

Eventually Jim married Amphar and brought her home to live in Wales where they remain happily married 30-odd years later. Dave married Arree and brought her to Newcastle where they also are happily married and raising grandchildren. As for me, Noy and I had our first son and our daughter in Thailand where I was working for a year for Western Geophysical, touring Thailand on an exploration crew looking for oil and gas, then came home to settle in Southampton near my parents' flat after I'd been ill and needed abdominal surgery which meant I had to come home to convalesce while Noy and the kids stayed in Udon Thani with her parents. Times were hard, but my lovely Mum somehow persuaded my (Yorkshireman, tight as a shark's arse) father to help me buy my own house and come back to Thailand to pick up my family and bring them home.

Noy made a wonderful wife and mother and we soon had another son who was born in Southampton. Our daughter got married and now has given us 3 beautiful grandchildren who live only a couple of miles away.

All I can say to those who see Thai girls as money-grabbing whores is that back in the 70's they weren't like that.

I found an excuse in 2009, when our marriage was very rocky, to return on my own for my mid-life (late-life!) crisis and do the rounds of the bargirls like I did in the old days and I fell deeply in love with a coyote dancer. So in my case it was the 'farang' who was more lacking in morals while my lovely wife waited patiently at home for me to get it out of my system. I came home with my tail between my legs, having collected another broken heart along the way.

Things are gradually getting better between us following my betrayal of my family and we are looking forward to returning to Thailand together to start up our farming business and retire in the sun. Not necessarily in that order.

Anyone who may remember me, or remembers the Bangkok of the early mid-70's is welcome to contact me at: <Gordon.F.Bennett@gmx.co.uk>

Reports from the bar scene of old always go down well and many people enjoy them – so many thanks for putting this together.