This disco was not in Accra's fashionable Osu district, and it was not around over-hyped La Badia Beach either. Vienna City Entertainment Complex (real name) was a strictly local affair in a middle-class part of Accra, Ghana's capital; and moreover, when I arrived around midnight the place looked almost empty. I obviously had wrong information about the 'on' night.

Three or four bar stools away from them, I called the idling bar tender, put a few cedis into his hand and shouted into his ear: 'One soft-drink for each of them, and tell them I'm not asking for anything else.' One of them wore brown +++suede boots covering her knees and then very little fabric all the way up to her waist line. Surely they were ladies of the night. But I enjoyed the show.

I retreated to a bistro table some rows back that gave me a good, and discrete, view of the shaking frenzy and I actually hoped to be out of their attention. For me, they were a stunning show, but not interesting characters, too flashy. From my bistro table I observed the bar tender talking, the girls looking over and then – refusing my cold drinks. Had I messed it up? The bar tender waved the cedi notes in my direction, asking what to do with them.

When the music changed, the girls settled on their bar stools for a moment, but then they almost stormed my table, with huge smiles and sweat pearls all over. They were still high on emotion from their dance fest. At least I obviously hadn't embarrassed them.

Against the PA, we shouted introductions and then decided to continue talking outside, on the empty parking lot. I learnt they were from Nigeria, currently 'holidaying' in Accra. Most Nigerians I met in Ghana were well educated, hoping to escape the more stressful 'naija' lifestyle between Lagos and Abuja. Mary and Grace made no difference, and they spoke a rich and accent-free English, disappointingly unexotic.

Coming from Gambia, I asked them the one question people really want to know there: 'What's your tribe?' This baffled them. Mary answered: 'Why, tribe? We are part of the Nigerian nation.' She smiled proudly.

They said they stayed with 'Ghanaian lady friends' in a simple wood-house right next to the beach in a lower mid-range residential area, actually not so far from my hotel. I was invited to pop along.

When I did so, opening the unlocked house-door myself, I spotted around five black ladies, mid-twentyish, lying on a carpeted floor, tapping at assorted toy computers, toy phones and other toy gadgets, all interconnected through a spaghetti bowl of toy cables. I believe, or at least today I feel like, I heard the hiss of an analogue modem from under some half-broken tea-table. These young African ladies with their athletic hardwood bodies wore appropriate attire – football shorts and faded tank-tops. And they almost didn't look at me.

When my Nigerian friends finally realized my presence, they got up in no hurry and changed dress. We went to the beach – a windy, ugly stretch of dirty sand. From a makeshift bar we procured soft drinks (the girls paid), pitched white plastic chairs into the sand and tried hard to withstand the gale.

Grace now was somewhat cheeky, bordering bold, and enjoyed disrespectful remarks. She also smoked cigarettes, whenever she managed to light one in the beach storm. Grace noted soon that I was more attracted to Mary and left for something she claimed she had to do. 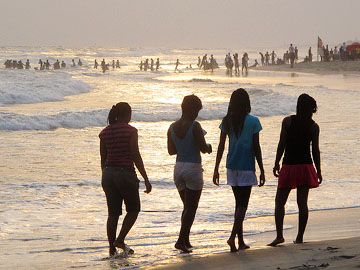 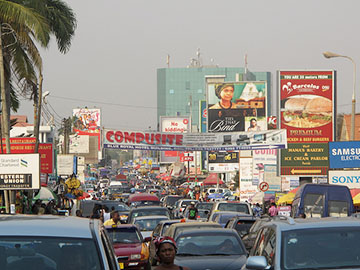 And I did like Mary. She was rather shy and had an innocent church goer's air about her. I think she blushed at some of her friend's bolder remarks, if black people can blush at all. It was now hard to imagine that Mary had put on this steaming, skilful dance show at the local disco – actually she had shown this dearth of fabric between boots and waist line.

I rather fancied a second look at that specific part of Mary's, but she wouldn't even let me hold her hand; not under the table in a live music restaurant, or hours later on a dark residential street, when I walked her home in flat, safe Accra.

Nevertheless, Mary always liked to meet up; if not for live music or the windy beach, she would suggest coffee and ice-cream in an air-conditioned coffee shop on Oxford Street. Ahead of our first coffee-date I had feared that Mary would dress up too sexily in broad daylight – but she arrived in a chequered knee-length skirt, frill blouse, flat leather shoes and with only light make up.

I happily watched Mary stepping into the coffee-shop like a nice college girl, but just then our first culture clash happened: I was shocked when Mary tried to air-kiss me left-right with loud mwahs, and Mary was shocked when I failed to retaliate easily and properly.

But after that, things went smooth, if unexciting. I learnt that Mary had had a French boyfriend in Lagos; he might have give her the notion that air-kissing is something normal. Mary sounded as if this past relationship entitled her to more European partners in the future. She didn't elaborate though if my hapless air-kiss performance ruled me out for now.

I had a suspicion and asked Mary if that was her real name.

So what's your real name, I inquired. I expected a delightful local name like Obiagaeliakunwa, Odinakachukwu or perhaps Obiamakachukwu.

My real name is Ethelburga.

After some time, I left Accra – and Mary (I stayed with that name) – and traveled up the Gold Coast, through Cape Coast, Elmina, Takoradi, Axim, Beyin, almost into Ivory Coast, leaving Mary more and more behind. Just the odd text went back and forth.

So I was quite surprised when one evening she actually called me. I lounged on a delightful bungalow porch west of Elmina, overlooking the thundering Atlantic Ocean, and wondered why my phone might announce a call from Mary in distant Accra.

We exchanged extended pleasantries, as is custom in these parts.

You know, she said, I think tomorrow I will travel back to Lagos, Nigeria.

Yes, by bus, changing vehicles at the borders of Togo, Benin and finally for Nigeria.

Me: So I wish you a safe trip, hopefully not too hot and not. too long.

Mary seemed reluctant and I wasn't sure what else to say, so I asked about her time of departure.

But Mary had something else on her mind. After some more hesitating she said, you know what?

If you'd like, I could wait some more days for you.

* To all readers, yes, I know this is not Thailand or even South-East Asia centric, but travel stories are generally well-received so I hope you don't mind its inclusion. (If you do, just move on to the next submission.)

I wonder what happened next!

My Experience With Thai Dating