My 13 year old son is not the most industrious student in class. That is basically the reason I put him in a summer special program to catch up on what he should have learned in regular classes before entering junior high in May. It’s a boarding class sort of camp arrangement. As an incentive I promised him a short holiday. Hopefully the treat to a fun weekend before he leaves will encourage him to work harder! 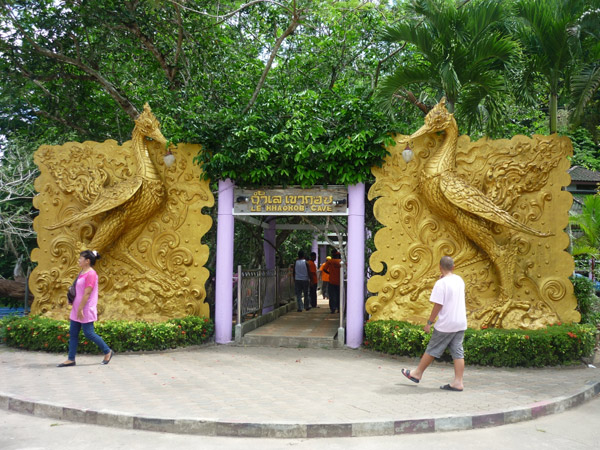 We left Saturday morning to visit the caves near Hui-Yot. Tum Le Khao Kob is a national park about 45km outside Trang. Several blue indicators along the way in Thai & English make it easy enough to find. The site is almost exclusively visited by Thais. In fact we saw very few farangs in the few hours we where there. No English is spoken. Admission price is a reasonable 150 baht person (Thai & farang alike I was told).

We settled down for a snack after arrival at the caves & then were guided to one of these little boats with seating for up to 6 people. Two guides equipped with paddles, one in front, one in the back joined us. There’s a 600m very picturesque stretch on the river before entering the caves. Later it turns into more cliff-like terrain. It looked like a sunny day when we left home in the morning but as luck would have it, the sky clouded over about half way and rain started to pelt down in the typical manner of the tropics. By the time we entered the cave being on an open riverside boat we were completely soaked! The guides offered to turn back to dry up but I told them to go on anyway. Once inside the cave we forgot about being wet & enjoyed the various sites; bizarre rock and stalagmite formation, hordes of bats, at some places lots of insects or fireflies & the inevitable Buddha shrine. One of the guides was quite knowledgeable & explained as good as he could the genesis of what we could see & admire (in Thai). 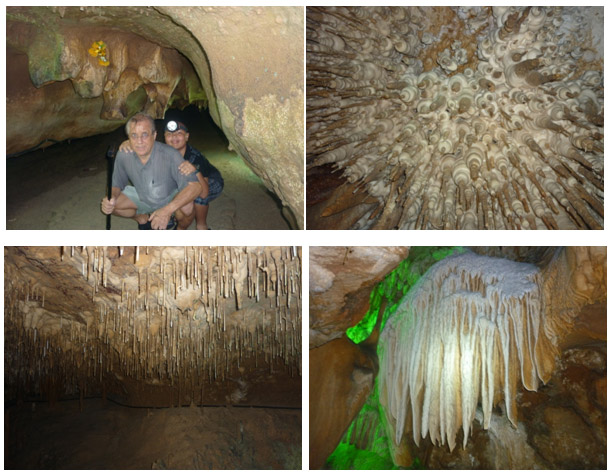 About halfway through we were asked if we’d like to continue the regular way out or alternatively go through the Tong mongarn (dragon belly). Naturally my 13 year old wanted to explore the dragon belly. Back on the little boat the cave progressively narrowed & after about 200m we had to lie down flat on our backs. Suddenly we were completely enclosed by rock not able to move body & limbs or even lift our heads. At times it felt like my nose could touch the ceiling just lifting the head slightly but my son said that was the effect of my myopic view & I should take of the spectacles! With two relative lightweights in the boat & water raising due to heavy downpours it seems we were floating too high above water level. Next we heard screams in front of us. One of the Thai ladies in the boat ahead had scratched her knee but there was no way the wound could be attended to with any room for movement. It was not the end of our troubles yet; the boat got stuck on an invisible underwater ledge. The guides where puffing away in pain in an effort to free the boat & get us moving again. I’m not a claustrophobic in normal times but this was more than just an uncomfortable 30 minutes. I was reminded of a tragedy that occurred several years ago in Khao Sok National Park. Seven or eight people, tourists & guides lost their lives in caves when surprised by sudden rising floodwater after heavy rain. My son was brave & other than hold my hand firmly he did not panic. 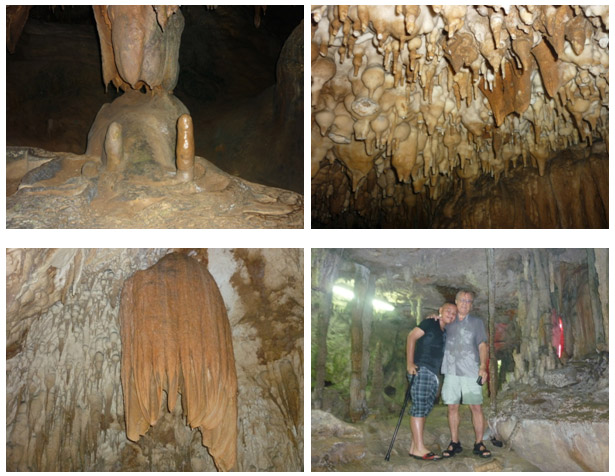 Eventually we made it out, what a relief! The guides where apologetic. They had earned a handsome tip & and we were glad to be out unscathed. It was time to move on. 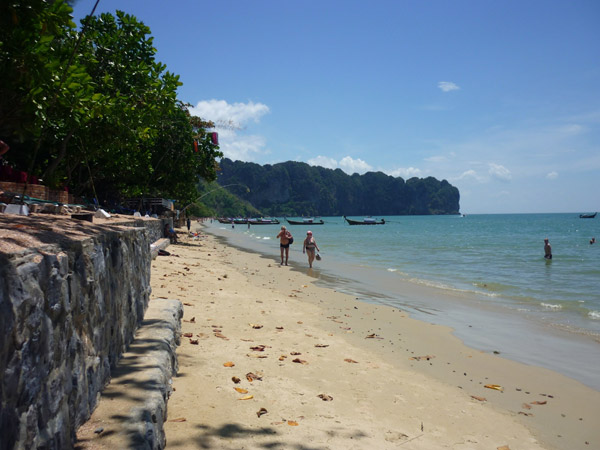 We reached Krabi Ao Nang late afternoon. My first choice here is the Krabi Resort, a beautifully situated beach front hotel. An enterprising Thai built the hotel 30 years ago. The site was so deserted then they had to build their own access road being the first and at the time only hotel in Ao Nang. A few years later a more modest hotel was built, the PraNang Inn that was to be my favorite lodging for years when staying over in Krabi in the early 90’es on excursions from Phuket. The simple footpath along the beach about 600m long between the two hotels was completely deserted then & very dark on a moonless night. I have memories using torchlight to join the two ends back in 1989. Today it looks more like a stretch of Pattaya beach road replanted at AoNang! Both hotels where upgraded several times over the years.

However due to still being high tourist season unfortunately both hotels where fully booked. Our choice fell to Vogue Resort & Spa or rather my son’s choice. His reasoning; McDonalds restaurant is right next to it! Not my favorite eatery of course but as I mentioned earlier it was his treat weekend so I let it be and halleluiah to the land of the free & the home of the brave for giving hamburgers to the world! After checking in the hotel it was time for the highlight of the day. That for us old Europeans is aperitif, dinner with good wine, desert and “café digestive” (Grappa, Kirsch, Williamine or similar). Avoiding the numerous pizzeria along the front we found just what we wanted nearby (I’m still walking with the help of a stick). A charming Thai restaurant with a guitarist on a small stage to get into the right appetizing – evening mood! Good food & surprisingly attentive & smiling service.

In little more than a generation Krabi Ao Nang has gone through the same amazing transformation that Phuket & Ko Samui did earlier. From the backpackers paradise with cheap & very basic bungalows to the international package tour or tourist class hotels! More recently luxury class premises have sprouted up to accommodate the “elite”. One of my acquaintances recently named Ao Nang a tourist ghetto as all amenities for the “young & enterprising”, from McDonalds to karting rink, are now in place. Personally I would not go that far and frankly I have no complaints, the hotel / spa vogue was almost worth the high season price. Spacious, clean rooms, nice pool set in tropical forest garden surrounding. Excellent breakfast buffet the next morning! Finally for our second night at Ao Nang we managed to get a much upgraded beach bungalow at the Krabi Resort.

Nice report. Being enclosed in a tight space is one thing, but in an underground cave in a boat with previous little space between you and the top of the cave, darkness, smell, disorientation, hmmm, not sure how much I would enjoy that!

It’s All In The Mind, You Know

So How Jai Dee Do You Want To Be?